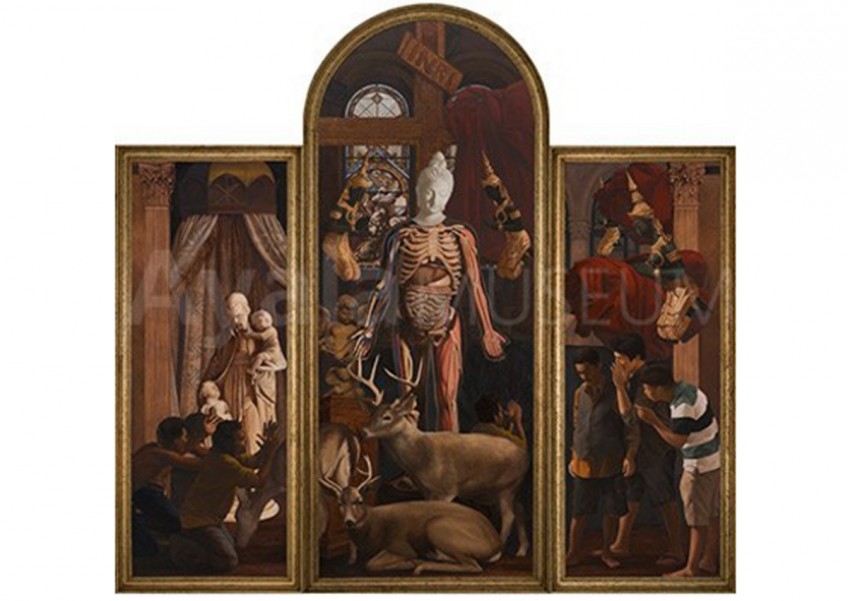 Local art-lovers are blest to be given a chance to see a number of major works by Natee Utarit, the 47-year-old Thai artist described by Asia Society Museum director Boon Hui Tan as "one of the most conceptually rich and technically sophisticated painters currently working in Southeast Asia."

Utarit's travelling exhibit "The Altarpieces" has made its first stop in the country before it heads to Indonesia and Singapore.

The 12 large-scale artworks in oil on canvas can be viewed on the ground-floor gallery of Ayala Museum in Makati City until April 9.

This is part of the series "Optimism Is Ridiculous" that Utarit started in 2012.

For its surface similarity to Christian art and its critique of the art market, nothing could be apter than its run through the Lenten season and its opening last month timed with Art Fair Philippines.

The altarpiece cycle, started three years ago, is his recent development in narrative painting.

It takes on the format of the religious art found in Christian churches, from colour tonality to elaborate framing.

In surrealist composition using the technique of photorealism, the artist conveys Eastern philosophy through the pictorial idiom of Western art, ranging particularly from the Low Renaissance to the Baroque.

The viewer is struck by the artworks' scale (mural-size), and overwhelmed by the complexity of composition and symbolism.

Each piece is a busy canvas, crammed with human figures, objects, vanitas, heraldic banners, vegetal and animal forms-almost Boschian in their superabundance.

Utarit is best known for his work "questioning the nature of images, particularly photographs, through the medium of painting."

This is a basic characteristic of postmodernist self-reflexivity.

Also, after the critical and commercial acclaim of his previous works, he has grown ambivalent toward the nature of art such that he started making some scalding commentary on the contemporary art world.

This is illustrated in a few early altarpieces like "The Private Expectation of God and the Common Reason of Investment."

In these, Tan says, the artist has "mined the long complex history, idiom and visual tropes of Western European allegorical painting as a way to critique the predatory intrusions of the art market into the region-particularly the reduction of art and artists to commodities and the paradoxical elevation of them to false gods."

In the triptych "Nescientia," the three panels are dominated by the central figures of the Apollo Belvedere (modified), the Wise and Compassionate Buddha (vivisected), and the Crucified Christ (crucifix)- three ideals of art and religion.

But what seem like the faithful genuflecting are revealed to be frenzied bidders at an auction, worshipping the commercialization of art as the new religion.

Two triptychs have titles rooted in the postwar philosophy of existentialism: "Theatre of the Absurd" and "L'enfer, C'est les Autres."

The first depicts the nihilism of contemporary society-"our rejection of faith in today's perverted world," says the artist.

When we abandon the ideals of science, art and religion, life no longer has any meaning or purpose.

The second, taking its title "Hell Is Other People" from Sartre's play "No Exit," portrays a world forsaken by God.

Utarit offers "my interpretation of the world and its various beliefs that appear in the Western world from my own personal Asian perspective… These paintings represent a view of God, the world around us, and contemporary events, filtered through my own Buddhist beliefs."

Naturally it results in imagery that verges between Asian and European.

Postmodernism is here vividly manifest, replete with visual puns and mash-ups of Western and Eastern iconographies.

The symbolism may seem recondite at first, but when studied close enough, a rich harvest can be gleaned.

It is art like this that makes Tan declare Utarit as "one of the most learned and subtle painters working in Asia today."

And, we may add: His are the all-seeing eyes, an encompassing vision of the human condition (always a requirement for great art).

Because suffering and evil, injustice, crisis and death are not unique to certain communities, or specific to certain religions or cultures, but common to all humanity-rich and poor, Christian, Buddhist, atheist or pagan.