Their job interview is a beer taste test 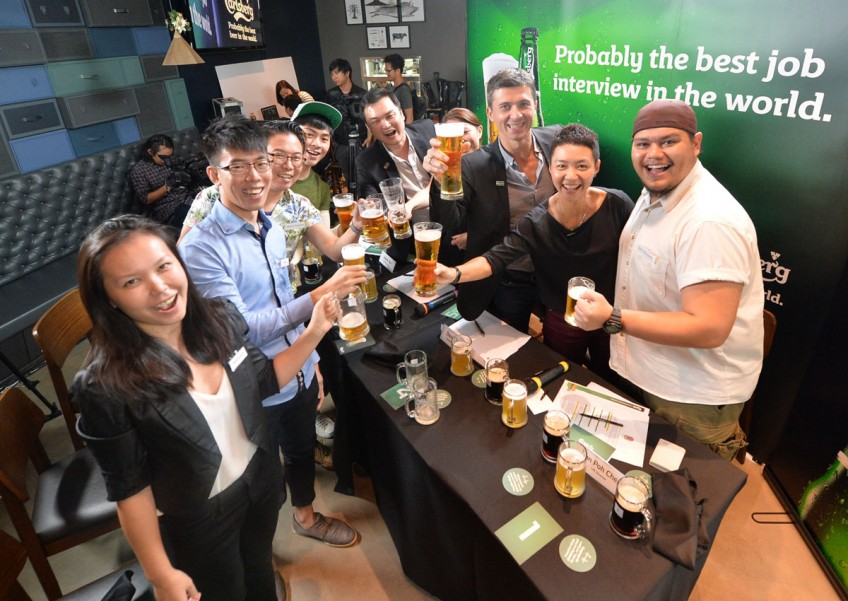 It was billed as "probably the best job in the world".

And for the five candidates who made it to the final hurdle, Carlsberg Singapore gave them what might possibly be described as the best interview in the world.

An unconventional, light-hearted and fun three-step test at Harry's at Marina Bay Link Mall yesterday afternoon. Over plenty of beer, of course.

At the start of the month, Carlsberg launched its Probably the Best Job in the World campaign, offering one lucky applicant the chance to serve as a beer taster and brand ambassador for four hours - and pick up $10,000 for the day's work.

The campaign garnered plenty of attention, with 22,630 applications pouring in.

During the final interview yesterday, the five hopefuls were put through their paces by a four-man panel from Carlsberg.

The interview contributed to 70 per cent of their scores. The remaining 30 per cent was determined by members of the media who were present.

For the first test, the applicants were blindfolded and made to pick out a mug of Carlsberg from two other beers - an Asahi Super Dry Black and a Kronenbourg 1664 Blanc - by taste alone.

Four applicants managed to plump for the correct mug. Mr Soh, who picked the Asahi, later said his taste buds were confused by prior drinking before the taste test.

Contestants then had to demonstrate their love for Carlsberg by coming up with an impromptu set of "wedding vows" to their mug.

It proved to be a hilarious test of wits as the applicants recalled their fondest drinking memories (or lack thereof), with one guy even going down on one knee.

Finally, contestants had to role-play as Carlsberg salesmen trying to win over a crowd of tough customers, played by host Allan Wu and the panel members.

The resulting exchanges were thoroughly entertaining.

But it was Mr Soh who stole the show - and probably redeemed himself for his earlier mistake - during his role play with Carlsberg Malaysia supply chain director David Bidau.

When Mr Bidau voiced concerns about beer making him fat, Mr Soh promptly took off his top to show the Frenchman his sculpted abs, resulting in cheers from the audience.

At the end of the evening, it was Mr Osgodby who landed the coveted gig after impressing the crowd with his wit, humour and spontaneity.

Mr Toh said: "The five finalists are very special in their own way - they are creative, spontaneous and hold conversations very well.

"The decision was a little bit difficult when we tried to fit the contestants to the Carlsberg brand, but in the end we felt that Daniel was the closest fit. He really exemplified the brand and he has reasonably sound knowledge of beers. He even got all the beer brands in the taste test correct by taste alone."

Mr Osgodby said: "I joined the competition with very low expectations, but obviously my personality is exactly what Carlsberg wanted and I'm elated.

"I honestly think that it was the best interview in the world.

"More companies should do interview processes like this - everyone having some beer together and a conversation, it's the best way to go."

This article was first published on December 16, 2015.
Get The New Paper for more stories.