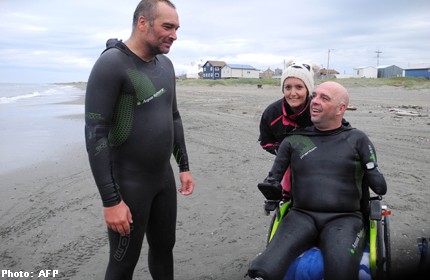 French swimmer Philippe Croizon, four-member amputee (R) speaking with his friend, swimmer Arnaud Chassery (L), on a beach in Wales, Alaska. Croizon, famed as the first quadruple amputee to swim across the English Channel, appealed to the thieves to return the wheelchair.

PARIS - A French quadruple amputee who won fame by swimming across the English Channel has appealed for the return of his custom-made electric wheelchair after it was stolen together with the trailer where it was stored.

"They haven't just stolen my wheelchair, they have robbed me of my autonomy," Philippe Croizon, a celebrity since his high seas exploits achieved with the help of paddle-like prosthetics, told local media.

Croizon, who lost his legs and arms after an electrical accident at age 26 in 1994, was staying with family at a house in northern France when thieves made off with the trailer that was hitched to a car parked outside. Inside the trailer was the wheelchair he said was worth more than 20,000 euros (SGD33,000).

"Keep the trailer as a gift if you like, since that's what it seems you were after, but give me back the wheelchair," he said on public TV channel France 3.

In 2010, Croizon became the first quadruple amputee to swim across the Channel between Britain and France. He has also swum the Straits of Gibraltar between Spain and Morocco and the Gulf of Aqaba between Egypt and Jordan.