PARIS, FRANCE and AMSTERDAM, THE NETHERLANDS - Media OutReach - Mar 27, 2017 - Tiger Beer , Asia's premium lager, is taking Air-Ink™, the world's first ink created from air pollution, to the streets of the world. An extension of a 2016 pilot project in Hong Kong, this new initiative sees Tiger Beer driving creative collaborations between Anirudh Sharma, inventor of Air-Ink™ and co-founder of Graviky Labs, and emerging artists from across seven cultures to showcase this breakthrough technology to the world.

Believing that the best ideas are often born on the streets and not in corporate boardrooms, Tiger is kicking off its global Air-Ink™ initiative on the streets of London before continuing on to Berlin, New York and Singapore. Since its launch in 2016, the initiative has seen over 770 litres of Air-Ink™ harvested -- the carbon emissions equivalent of continuously driving a typical diesel vehicle for 2.3 years. It also has the potential to be scaled up, for example if the devices were fitted to all London diesel black cabs it could save 10-15% of particulate emissions. 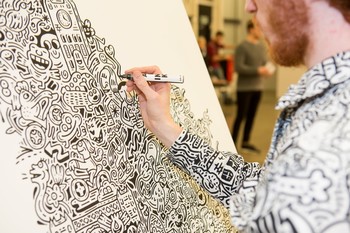 Demonstrating the power of creativity with purpose, 19 international artists will join this year's global movement to transform the collected pollution into beautiful Air-Ink™ artworks symbolising a bright future for our cities' streets, and inspiring others to take action.

"Tiger Beer believes in supporting people across cultures with brave ideas, and partnering with them to uncage the tiger spirit within us all to create awareness and positive change for issues affecting our communities. Following the encouraging response to our Air-Ink™ pilot in Hong Kong, we wanted to further our support of Anirudh and Graviky's mission against the worldwide issue of air pollution and showcase how street creativity can make a difference. By bringing artists and inventor together, we turned the world into a canvas for Anirudh's message in a beautiful and transformative way, one we hope will inspire people and community leaders to get behind the cause and benefit from the technology," says Mie-Leng Wong, Global Director at Tiger Beer, HEINEKEN Asia Pacific.

Anirudh comments, "Growing up in India and experiencing the effects of air pollution first-hand motivated me to think of ways to turn this harmful pollution into something useful -- purified, safe ink. After initial research at Massachusetts Institute of Technology, we spent a lot of time perfecting the technology and our ink at Graviky. Now, seeing artworks created with Air-Ink™ and displayed in major cities of the world is truly an exciting step for me and my team. A beautiful fusion between technology, science, and art, this collaborative initiative with Tiger has taken our technology further than I could have imagined."  Graviky's hope is that this demonstration will inspire a city or municipality to conduct their own pilot program together in the near future.

Delivering creativity from the streets, for the streets, consumers in participating cities can encounter Air-Ink™ artworks in iconic city locations and experience live Air-Ink™ painting sessions by cutting edge artists over a cold Tiger Beer at bars around town. In addition to this, consumers in London and New York can also look forward to pop-up galleries featuring works created by various artists using Air-Ink™. 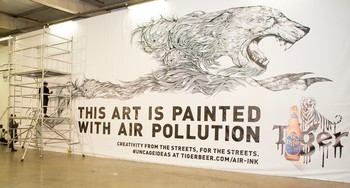 Participating artist Kristopher Ho, who is creating an Air-Ink™ artwork for London, says, "Being able to draw with what's essentially purified soot has been a fascinating experience and a great way to bring attention to the massive issue of air pollution. It has been really meaningful to work with Anirudh and Tiger Beer and be a part of this creative global community, which I see as a perfect fusion of art and science.  It just goes to show the extent we can all go to make a positive impact on our surroundings."

The Air-Ink™ initiative furthers Tiger Beer's ongoing support of those whose unconventional ideas make a positive change in their communities. A film about the global Air-Ink™ initiative and ways consumers can show their support and spread the word can be found at TigerBeer.com/Air-Ink .

Tiger Beer was born in 1932 on the streets of Singapore. A stone's throw away from the equator, its unique tropical lagering technique meant it was able to brew a beer that would keep Asia cool. In 2015, it started using the rays of the tropical sun for brewing, with over 8,000 solar panels installed on the rooftop of its facility in Singapore. Now, e very Tiger Beer produced in Singapore is brewed by the sun. It is the number one premium beer in Asia, and the world's fastest growing premium beer, available in more than 50 markets across the globe. For more information, please visit www.tigerbeer.com .

HEINEKEN is the world's most international brewer. It is the leading developer and marketer of premium beer and cider brands. Led by the Heineken® brand, the Group has a powerful portfolio of more than 250 international, regional, local and specialty beers and ciders. We are committed to innovation, long-term brand investment, disciplined sales execution and focused cost management. Through "Brewing a Better World", sustainability is embedded in the business and delivers value for all stakeholders. HEINEKEN has a well-balanced geographic footprint with leadership positions in both developed and developing markets. We employ approximately 73,500 people and operate more than 165 breweries, malteries, cider plants and other production facilities in more than 70 countries. Heineken N.V. and Heineken Holding N.V. shares trade on the Euronext in Amsterdam. Prices for the ordinary shares may be accessed on Bloomberg under the symbols HEIA NA and HEIO NA and on Reuters under HEIN.AS and HEIO.AS. Most recent information is available on HEINEKEN's website: www.theHEINEKENcompany.com