Tillerson's move a win-win for both China and US 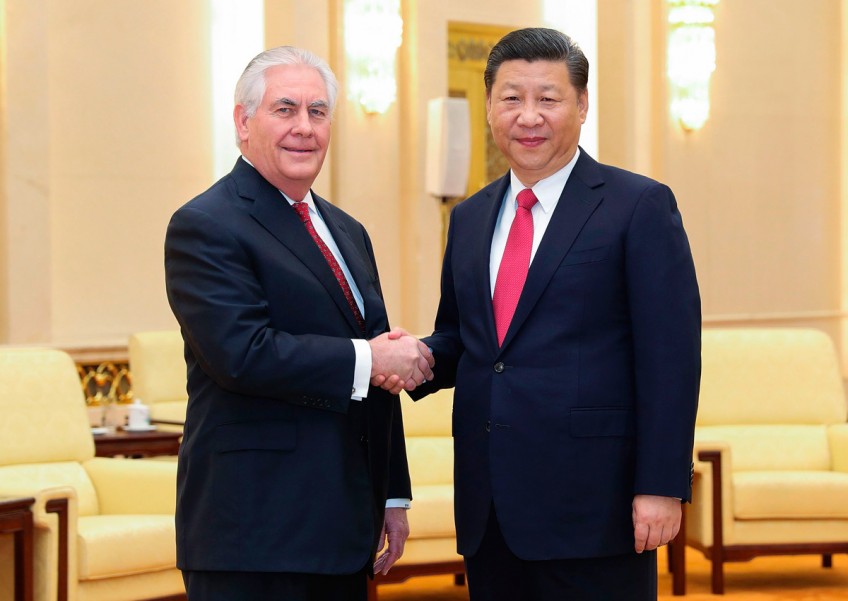 President Xi Jinping tells visiting US Secretary of State Rex Tillerson that the nations should enhance exchanges at all levels. They met on Sunday at the Great Hall of the People in Beijing.
AFP

Right after US Secretary of State Rex Tillerson wrapped up his visit to China on Sunday, the Washington Post declared that Tillerson appeared to hand Beijing a diplomatic victory.

The Post article went on to scold the top US diplomat after he described the US-China relations as "a very positive relationship built on no confrontation, no conflict, mutual respect, and always searching for win-win solutions".

Tillerson's words came as a surprise, to the delight of many in Beijing but the dismay of some in Washington.

The proposal made by China in 2012 to build a new type of major country relationship between China and the US based on "no conflict, no confrontation, mutual respect and win-win co-operation" was aimed at avoiding a disastrous war if the established power became too fearful of the rising power.

While meeting President Xi Jinping in California in June 2013, then US president Barack Obama appeared to accept the idea of a new type of relations.

But his administration then stayed away from it, interpreting it as away for China to tell the US to keep quiet no matter what China does.

It was a major distortion of the Chinese proposal which clearly acknowledges the issues existing between the two countries, issues that should be resolved peacefully, with mutual respect and through dialogue, rather than confrontation.

By rejecting the Chinese goodwill proposal, the Obama administration made a huge mistake in this regard.

Strategic distrust and rivalry between the two countries worsened under Obama.

The same kind of not handing China a victory mentality seemed also behind the US opposition to the Asian Infrastructure Investment Bank and its Pivot to Asia strategy that aimed to curtail China's influence in the region.

Thus, the endorsement of the Chinese concept by Tillerson is simply correcting a mistake made by Obama.

Hopefully, Obama's successor Donald Trump will reiterate that when he hosts Xi in Florida next month.

That endorsement does not mean that either side should be shy of disagreeing with the other.

For example, the two countries agree on the goal of denuclearization on the Korean Peninsula, but their approaches are not the same.

While Tillerson said all options, including military ones, are on the table, China has called for calm, restraint, dialogue and diplomatic solution.

China has endorsed UN Security Council resolutions on the Democratic People's Republic of Korea for its violation in missile and nuclear tests.

But China believes that diplomacy, rather than just sanctions, will lead to a solution.

A similar view is held by former US defence secretary William Perry who visited the DPRK to negotiate denuclearization during the Clinton administration.

Perry argued in a March 10 article that the DPRK might well agree to give up testing of nuclear weapons and long-range missiles and agree not to sell or transfer any of its nuclear technology, in return for economic concessions from the Republic of Korea and security assurances from the US.

Many who have threatened war on the Korean Peninsula have not thought through the consequences it will have and the huge damages it will inflict on the region.

There are many differences between China and the US.

But as long as they are willing to work in the spirit of no conflict, no confrontation, mutual respect and win-win co-operation, they are more likely to find a solution, narrow differences and avoid the Thucydides trap.