Timbre tunes in to food 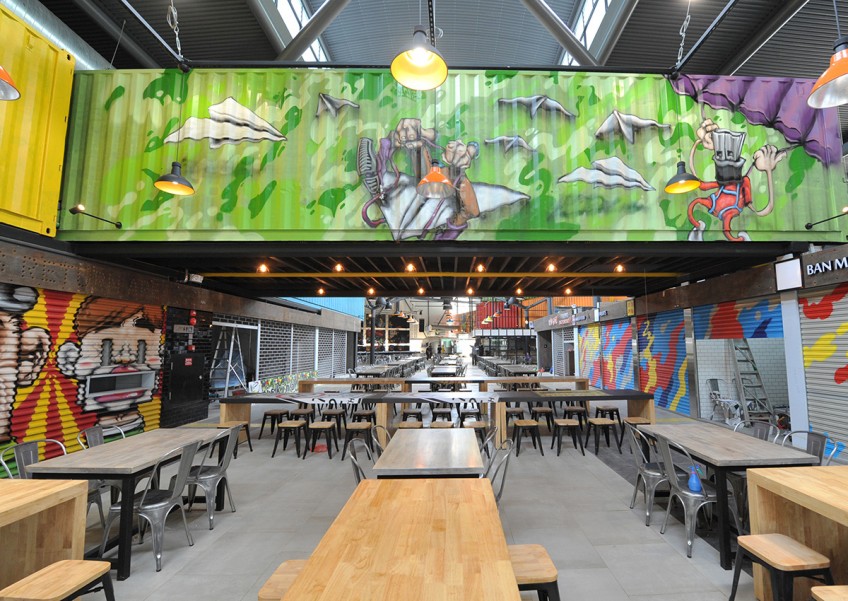 Food may not be the first thing people think about when it comes to the Timbre Group. It is better known for its live music venues, music festivals and pizza parlour 12-inch Pizzas & Records.

But that is changing. It has embarked on its most ambitious food and beverage venture so far, one that has been three years in the making.

The 24,000 sq ft Timbre+ opens on Friday at JTC Corporation's LaunchPad at one-north, just across the road from Fusionopolis, a research and development complex in Ayer Rajah.

The sprawling 700-seat non-air-conditioned venue houses 21 hawkers and 14 restaurant brands, and will cater to the working population of more than 40,000 in the one-north district.

JTC tore down the canteen that used to occupy the site and built a larger space for Timbre+. Large containers are part of the industrial-chic aesthetic, complete with vibrant graffiti designs.

Instead of the usual hawker centre-type stalls, some stallholders will operate out of repurposed containers, while others serve and cook food in specially imported Airstream caravans from the United States, food-truck style.

There are also dedicated restaurant spaces in Timbre+ for some brands, good for 20 to 30 diners.

And in line with the Timbre brand, the space also has a stage for live music from Wednesday to Saturday nights.

Timbre Group's managing director Edward Chia, 32, declines to reveal the cost of the project, saying only that it is "still investing further" because of plans to use the space for festivals.

On setting up Timbre+, he says: "We took a long, hard look at the future of Timbre. We cannot photocopy Timbre so many times anyway. It took a long time to get the right concept, along with an efficient layout."

He hopes that Timbre+ can help address issues facing the food and beverage scene, such as manpower shortage, high rents and cost of investment.

"With small menus, you can still give customers variety without reducing productivity and keep things affordable," he says.

"Diners now want to have interaction with the people making their food, so I need to have chefs who like to meet people."

Indeed, the mix of stallholders is an interesting mash-up of restaurant chef-owners, young hipster hawkers and experienced old-timer hawkers.

Eighteen hawkers from the old canteen have returned. They will operate on weekdays from 6am to 6pm, while the restaurants will open from 11am.

Restaurant offerings include Spanish tapas and paella from Portico Platos; deep-dish pizzas with unusual toppings and crusts from The World Is Flat by Tanuki Raw and casual French fare from Garcons.

Other familiar names include chef Damian D'Silva, who declines to say what he will serve; Big Bern's American Grill by Bernie Utchenik, creator of Botak Jones; and Cajun seafood chain Dancing Crab by the TungLok Group. Timbre will also run a bottle shop with an island bar selling craft beers and whisky.

Two "incubator" spaces have been set aside for first-time entrepreneurs. The spaces, one of which is a caravan, can be leased for three to six months.

Stallholders whom The Sunday Times spoke to are clearly excited by the new space, especially the older hawkers.

Mr Boh Chuang Kheng, 50, third- generation owner of Nam Heng Hainan Chicken Rice, is happy to be back with his old hawker friends.

He says in Mandarin: "I think the (Timbre+) concept is good and it's very comfortable for diners too. The bulk of our business comes from the lunchtime crowd. Over the years, we notice that people start to order takeaway food from 10am onwards.

"The restaurants don't worry me, they give more variety to diners. When it's pay day, they can eat there for a while. After that, diners still come back to us."

Mr Vincent Koh, 47, who will sell fruit juice from one of the converted container stalls, says he considers the new space an "upgrade". He says in Mandarin: "The place has changed so much, but we need to keep up with the rest of Singapore."

Amid the excitement of Timbre+'s opening, many of the young owners also admit to being uncertain of its prospects.

Chef Chung Deming, 34, who will open Kush, selling modern Singaporean skewers and rice bowls, says: "It is anybody's guess how Timbre+ will work out. Whether it is sustainable will be a challenge for all of us."

Portico Platos' chef Nixon Low, 30, says: "Timbre+ is a huge opportunity for us. Yes, there are many brands here and it can result in a price war. But I see this as a collaboration rather than competition."

Timbre+ (73A Ayer Rajah Crescent, JTC LaunchPad @ one-north) opens from 6am to midnight (Monday to Thursday), 6 to 1am (Friday and Saturday). It is closed on Sunday. Live music at night from Wednesday to Saturday . Go to www.facebook.com/timbreplus or www.timbreplus.sg

What: Indian restaurant Gayatri goes modern at Chit Chaat Chai, housed in one of the caravans.

The name is a play on "chit chat" and chaat refers to savoury snacks served in stalls or food carts in India. Chai, of course, refers to the popular masala tea with fragrant Indian spices and herbs.

Inspired by sandwich chains that allow customers to customise their sandwiches, diners can order kebabs and chapati wraps with fillings such as tandoori chicken and paneer (cottage cheese).

Prices start at $6, including a drink.

Gayatri chief operating officer S. Mahenthiran, 27, is also looking to introduce snacks such as mini versions of poori, which are unleavened deep-fried Indian breads usually served with curry. Understanding that diners in the area are busy executives, he says: "People here want things to be fast-moving, no one has time for a five-course meal. Chit Chaat Chai fits that, plus we've always wanted a roadside concept with customisable wraps."

What: Go the whole hog at Iskina Cebu, which specialises in lechon or roast pig.

Previously located in Geylang East Avenue 3, Cebu-born owner Chris Calledo, 34, has found a new home at Timbre+, where he can roast up to eight pigs in six hours.

Returning to the menu are favourites such as lechon, spicy bellychon and sisig (Filipino sizzling pork). He also hopes to introduce more Cebu food such as soups, spicy lechon-infused rice and Cebu pochero, a popular Filipino stew, and dishes to pair with beer.

Mr Calledo says: "Timbre+ is the right fit for the evolution of Iskina Cebu. I get a bigger kitchen and we can cater to special events as well.

What: Fans of wonton noodle stall Wong Kee at Maxwell Food Centre, which closed in October last year, can now head to Timbre+.

In addition to wonton noodles, young hawker Kelly Wong, 27, will also sell classic Cantonese roast meats at her stall, which - in keeping with the design of Timbre+ - is housed in a container.

Besides the signature wonton noodles, the brand is also known for its spinach and tomato noodles, which Ms Wong's father supplies to other hawkers. Prices start at $3.50 for noodles and rice dishes.

On the Timbre+ space, Ms Wong says: "The location is good and is very modern compared with the usual hawker centres. It is also suitable for young people. I'm glad I'm not the only young hawker here."

What: Food meets design at Food Anatomy, run by young hawkers Gee Jia Xin, 25, and Sean Wong, 31. They have been running Western food stall Deli & Daint at Maxwell Food Centre for the past four years.

They serve food that is in layers - like a lasagne - and a serving comes sliced in cake-sized cubes.

For example, a portion of the Loaded Potatoes Trio comes with layers of potato, sweet potato and purple sweet potato, topped with bacon.

Pork cheek charcoal pasta is also presented in compact layers, with the pork cheek on top.

All dishes, from appetiser to main course and dessert, are served this way and diners can pick them from the stall's display chiller. A set of three costs about $10 for lunch and $16 for dinner.

On the layered food, she says: "We've had the idea for a while and were looking for a suitable place. We love the concept of Timbre+. Our food art matches the artistic feel of Timbre+."

What: Kush serves modern Singaporean charcoal-grilled skewers and rice bowls. It is the sister outlet of The Quarters at Icon Village, which is known for going local with dishes such as satay burgers, Duriancanboleh (durian creme brulee) and chilli crab pasta.

The name Kush is short for kushiyaki, which refers to skewered and grilled meats and vegetables.

He will have more premium options such as wagyu and Angus beef on the menu, along with his popular salted egg fries from The Quarters.

"Opening at Timbre+ is part of growing the business and improving our market reach," he says. "Many places lose a lot of flavour to mass-market production. I still want to provide flavour at good prices and serve fresh food to the masses."

This article was first published on March 27, 2016.
Get a copy of The Straits Times or go to straitstimes.com for more stories.