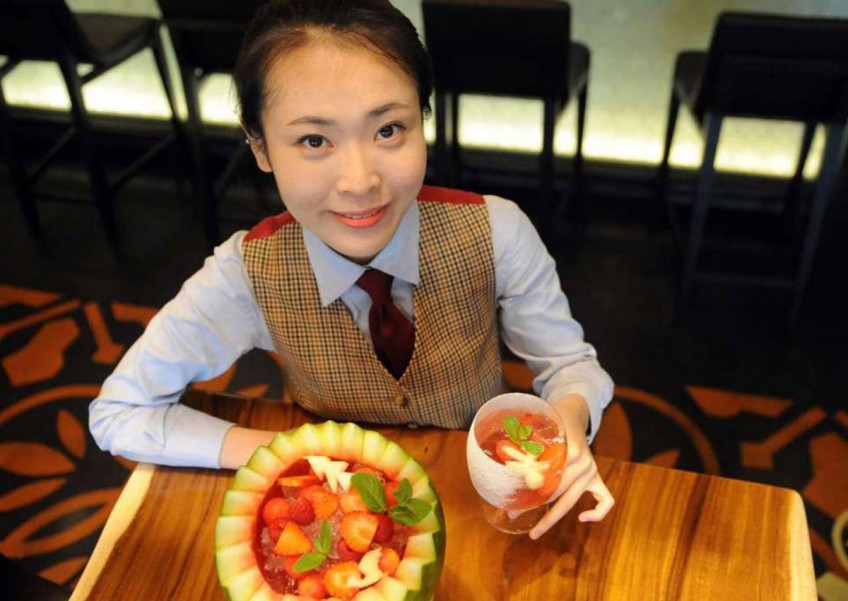 CAN YOU BE MY SANTA?

Mention Christmas and Yugnes Susela, 27, head bartender of Smoke & Mirrors at the National Gallery Singapore, thinks of cosying up to a fireplace.

His cocktail is inspired by Gluhwein (mulled wine), which is served warm in wintry Europe.

He mixes shiraz wine with chartreuse, a green-hued flavoured liqueur aged with botanicals. Then he boils the blend with orange and lemon peel, cloves, cinnamon sticks and five-spice and nutmeg powders.

"I wanted to create a drink that is warm and comforting and goes well with the recent chilly weather," he says.

Home bartenders should not heat the spiced wine to more than 60 deg C or the alcohol will evaporate. Mr Susela adds that the cocktail can be kept in the fridge for up to two weeks, during which it will develop richer and more intense flavours.

The Singaporean says the name of the cocktail is meant to evoke some of the magic that comes with the festive season.

He says: "Kids no longer believe that Santa Claus exists these days, but it is still nice to bring back the feeling of getting together and being merry."

Peel from 1 orange and 1 lemon

2 cinnamon sticks, broken in half

1. Pour the red wine, chartreuse, orange and lemon peel, cloves, cinnamon sticks and five-spice and nutmeg powder into a pot. Stir to mix.

2. Set the pot over medium heat and let the contents simmer for 10 minutes, covered. Turn off the heat and set it aside for three minutes to cool.

3. Strain the mixture into a pitcher, discarding the peel.

4. To serve, chill a champagne flute for 10 minutes and sugar half the rim. Pour in about 120ml of the wine and top off with 90ml of champagne. Serve.

Spending Christmas in tropical Singapore inspired Bannie Kang, 26, assistant head bartender of Anti:dote bar at the Fairmont Singapore, to create a cool and refreshing tipple. It is adapted from one of her favourite drinks from childhood, hwachae.

Hwachae, which means fruit punch in Korean, is usually served in a large bowl filled with fruit and carbonated drinks in the summer.

Growing up near Busan, the South Korean says: "It is summer in Singapore all year round, so I thought of creating a drink that can go with the weather here. My mum used to prepare hwachae by pouring Sprite into a watermelon bowl."

Jazzing up the white rum-based cocktail are fruit slices and maple syrup. For a fizzy finish, she tops the cocktail with champagne. The rum can be replaced with other alcohol, such as soju and vodka.

1. Cut off the top of the watermelon and use a spoon to scoop out the fruit. Slice the fruit for use as a garnish. Slice off the rounded part at the bottom without cutting into the fruit, so the watermelon bowl can sit on a flat surface.

2. Pour the rum, lemon juice, maple syrup and cranberry juice into the hollowed-out watermelon. Stir the mixture. Add the champagne and top with crushed ice.

If you have leftover stollen from Christmas parties, you can use it as a cocktail ingredient.

Aki Eguchi, 34, bar programme director of five Jigger & Pony establishments, including Gibson and Sugarhall, soaks slices of stollen in bourbon for a day.

The Japanese bartender says: "Stollen has dried fruit and spices that contain the flavours of Christmas and these flavours can be infused in the bourbon."

Like eggnog, a Christmas drink made with milk, cream, eggs and bourbon, Humpty Dumpty is a thick and velvety drink. Instead of stirring in these ingredients individually, he uses a shortcut - melted premium vanilla ice cream to replicate the creamy consistency of eggnog.

To offset the sweetness of the ice cream, he adds bitter stout, which gives the cocktail more depth of flavour. He says the stout should be flat before being poured into the mixture as the bubbles would make the cocktail a little sour.

2. Strain the stollen-infused bourbon. Press the bourbon from the stollen using a spatula and discard the stollen. Pour 300ml of the bourbon into a punch bowl. The remaining bourbon can be used for another batch of cocktails. Add melted vanilla ice cream, stout and ice and mix .

3. Grate the meringue over the cocktail. Serve.

Giving the tropical cocktail a Christmas makeover is Seet Jing Ren, 30, food-and-beverage consultant to Aloha Poke, a cafe in Amoy Street that specialises in poke (pronounced po-kay), a raw fish dish from Hawaii.

Instead of rum, he uses Pimm's No. 1, a British gin-based liquor made with fruit juice and spices.

The fruitiness of this tipple is enhanced by citrus fruit, fruit juice and spiced honey syrup. For a Yuletide touch, Mr Seet adds cranberry juice.

Enhancing the drink's warm sensation in the mouth is ginger beer, which also dilutes the deceptively light cocktail.

Tiki cocktails are usually served with dry ice. To re-create the smokiness at home, he recommends lighting up one end of a cinnamon stick for each glass, extinguishing the flame and letting the residual heat release the cinnamon aroma.

He says: "It gives off a smoky and lovely scent that reminds one of Christmas spices."

1. In a mixing bowl, dissolve the sugar in the water. Mix 30ml of the sugar syrup with the honey and stir in the five-spice powder, then set aside.

3. Light up one end of a cinnamon stick for each glass, extinguish the flame and let the residual heat release the cinnamon aroma. Place the sticks in the glasses, pour in the cocktail, garnish and serve.

There is no need to buy expensive equipment. For instance, use a plastic water bottle if you do not have a cocktail shaker.

Instead of buying big bottles of booze, home bartenders can use mini bottles of liquor available in convenience stores for this punch.

His concoction has a fruit tea base mixed with fruit juice, honey and ginger and spiked with Aperol.

The fruit tea mixture contains oleo-saccharum, an ingredient in cocktails and punches used in 19th-century bartending. He makes it by pounding together sugar and grapefruit peel and letting the mixture sit until the citrus oil emerges from the skin.

He says: "The oil adds a zingy flavour and a tinge of bitterness to the fruit punch."

In the spirit of convivial gettogethers, the cocktail has a DIY element. Drinkers can customise it with vodka, cognac or orange liqueur.

After the cocktail is shaken, it is topped with champagne for a bubbly finish. "Cocktails are must-haves at festive occasions. By allowing your guests to choose the alcohol that goes into their drinks and shake their own concoctions, it becomes more fun and interactive."

Peel from 1 to 2 grapefruit

4 to 5 mango and strawberry tea bags

50ml bottles of alcohol such as vodka, cognac or orange liqueur

1. To make the oleo-saccharum, add grapefruit peel and sugar to a mixing bowl. Use a pestle to lightly crush and mash the peel to release the citrus oil. Stir the mixture, cover with Cling Wrap and set aside overnight.

4. Pour the oleo-saccharum into the tea mixture, strain into a bottle and discard the peel.

5. To make a cocktail, pour 50ml of your choice of alcohol, 100ml of the tea mixture and ice into a bottle and shake for 10 seconds. Pour into a glass and top up with 20ml of champagne. Serve.

This article was first published on Dec 20, 2015.
Get a copy of The Straits Times or go to straitstimes.com for more stories.