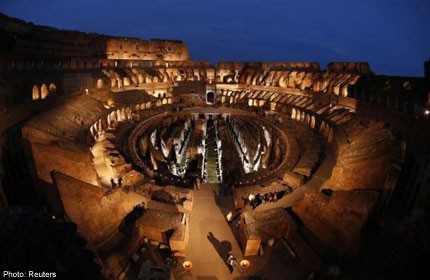 ROME - Italian authorities gave the thumbs-up to the company restoring Rome's Colosseum - once the site of gladiator fights and re-enactments of Roman battles - to carry on their work after a dispute with a rival for the contract.

The task is one of several privately-funded projects to save Italy's historic and cultural landmarks from decay.

Two Italian companies, Gherardini and Lucci, had bid for the contract, financed by 25 million euro ($34.1 million) in sponsorship from luxury shoemaker Tod's.

The council of state, Italy's highest administrative appeals court, said on Monday that Gherardini, which had already begun the work, could continue.

The council upheld a decision by a regional court which found that Lucci, another contract bidder, had not shown it had sufficient technical capability to restore the monument, which was built in the 1st Century A.D.

Elsewhere in Rome, jeweller Bulgari and fashion house Fendi, both owned by LVMH are paying to restore the Spanish Steps and Trevi Fountain respectively. Diesel jeans founder Renzo Rosso is paying to spruce up the Rialto bridge in Venice.