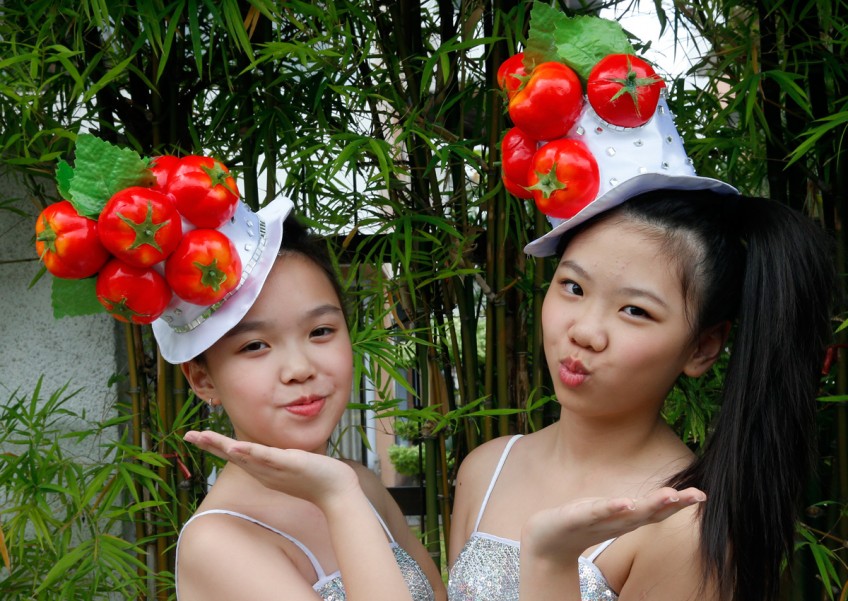 While the 10-year-olds are rookies making their rounds on the getai circuit for the first time this year, they belt out Teochew ditties and bust out simple choreographed moves with ease.

At the Shin Min-Wanbao Getai Awards held earlier this month, they snagged the Most Popular Newcomer nod based on votes by the public. The awards show, in its sixth year, is organised by Singapore Press Holdings' Chinese evening newspapers Shin Min Daily News and Lianhe Wanbao.

Esther, the only child of a housewife mother, 36, and electrician dad, 50, says: "I was really happy and proud to win the award. We may be holding a party to celebrate."

Charlize, the older of two children, adds: "Maybe we can go shopping". Her mother, 45, is a civil servant and her father, 46, is a production operator in a chemical plant.

The precocious lasses, who are Primary 4 pupils at the CHIJ Our Lady of Nativity, may not be blood relatives, but they are as close as real sisters.

Having known each other since they were 17-month-old toddlers at the same childcare centre, they share a chemistry that is palpable at this interview with Life.

They tease each other, chime in on each other's answers and talk fondly about sleepovers at each other's place and their common love of singing.

The pals, who are in the school choir, were paired up for getai after Charlize's aunt, Madam Huang Shan Shang, sounded out Esther's mother about the idea.

Madam Huang, 50, a veteran getai singer of more than 30 years, says: "Initially, Charlize wasn't so keen during her vocal lessons. I thought she'd have more fun with a friend. Now, they are both really into it."

During the 21 shows they performed throughout the Chinese seventh month this year, Esther and Charlize donned ostentatious outfits like all the other getai singers. One of their outfits is a silver dress and a top hat adorned with plastic tomatoes - a reference to their performing moniker, which means tomato in the Hokkien dialect.

Their vocal teacher Goh Moh Chuan, 63, taught them to sing Teochew melodies as "audiences will notice them because not many getai singers perform Teochew songs".

Although Esther is Teochew, she is not familiar with the dialect. Like Charlize, who is Hokkien, she has to learn the lyrics of their songs phonetically.

"Esther usually sleeps really early. I was worried that she would be tired. If she's exhausted, it may affect her concentration at school and her studies," says Madam Che, who accompanies her daughter to the shows.

"But every time she finishes a getai show, she's bursting with confidence. That's why I think it's a good experience for her."

Why are the two of you called the Ang Mo Kio Sisters?

Charlize: The name comes from a local drama we acted in. We played the younger versions of actress Liu Lingling and Pan Lingling in the Channel 8 drama 118. Our characters are the getai singing duo called the Ang Mo Kio Sisters.

Esther: A getai emcee once said that we should be called the crazy sisters. We are so excited to perform that we go crazy onstage.

How hard is it to learn the Teochew songs you perform?

Charlize: I tend to be forgetful. I worry that I will sing the songs wrongly during the shows. Every time I get the chance I will sing, even in the bathroom. Sometimes my little brother hears me and will sing too.

What happens when Charlize has a moment of amnesia on stage?

Charlize: Esther will sing louder to cover up for me.

Esther: When she forgets the song title, I will tell the audience, "Don't care about her. She's really gong-gong (dialect for silly)." This will give her time to recall the name of the song that we will be singing.

What do you do with the red packets that members of the audience give?

Esther: Once, we received $150 in a red packet. We will split the money and buy things to reward ourselves. The rest goes into our savings.

Charlize: I treat my family to drinks and buy toys for my little brother. Because my aunt is a getai singer, we will buy accessories and make-up for her.

Esther: We are grateful to her because she introduced us to getai. She also makes our getai outfits.

Do you have a say in the design of your outfits?

Charlize: I will search for costume designs online and show them to my aunt.

Esther: If we don't like the design, we will tell her and she will change it. Sometimes, she will tell us that the designs that we show her are too "auntie" and old-fashioned.

What music do you listen to?

Charlize: I like American singers Katy Perry and Taylor Swift. I love their songs, such as Swift's Blank Space and Perry's Wide Awake. They are pretty and some of their music videos are very funny.

Esther: I like Katy Perry too. She's famous and pretty. I hope I can be like her one day.

Esther: I hope people remember me for my singing because I started out in getai. I hope they remember our dresses because they are very beautiful.