The Top 5 Highlights of ONE: DEFENDING HONOR

The Top 5 Highlights of ONE: DEFENDING HONOR

PHOTO: The Top 5 Highlights of ONE: DEFENDING HONOR

ONE Championship stormed its way back to the Singapore Indoor Stadium on Friday Night, 11 November, with ONE: DEFENDING HONOR and the event did not disappoint.

The sold-out arena was sent into a frenzy when Eduard “Landslide” Folayang won via TKO against modern-day legend Shinya Aoki to claim the ONE Lightweight World Championship and end his incredible 1,316-day title reign.

Besides the unforgettable main event, there were other amazing feats during the night. This included Ahmed Mujtaba edging out fellow unbeaten prospect Benedict Ang, hometown heroine Tiffany Teo dominating Egypt’s Walaa Abbas in her promotional debut, and ONE Featherweight World Champion Marat Gafurov tapping out former champ Narantungalag Jadambaa and earning his sixth consecutive rear-naked choke victory in the process.

There were many extraordinary moments at ONE: DEFENDING HONOR, but here are the top five highlights of the night.

Eduard “Landslide” Folayang has finally achieved his dream. For the past five years, the three-time SEA Games Wushu gold medalist has made it his mission to win the ONE Lightweight World Championship, and in recent weeks, he has been telling everyone that he would defeat the legend Shinya Aoki.

He said that his time was now. He was right. The Filipino survived Aoki’s relentless submission wrestling and Brazilian jiu-jitsu attack in the first round, started firing off punches, kicks, and knees at the tail end of the second, and finally put him away with a knee and a barrage of punches to claim the belt.

As Folayang celebrated inside the cage, confetti rained down from the rafters and the new champion posing with the gold was a sight to behold.

This title win means so much more than being the best lightweight fighter in Asian MMA. It is a testament to his spirit. The poverty-stricken son of illiterate parents fulfilled his destiny of being a world champion. That is the ultimate cinderella story, and he will serve as an inspiration and a beacon of hope for Filipino youth for ages to come. Michelle Nicolini, one of the best female Brazilian jiu-jitsu practitioners in the world, made her ONE debut and put on a clinic against Mona Samir. She absolutely controlled the Egyptian wrestling champion from the opening bell, took her back in a matter of seconds, and patiently bided her time before submitting her with the rear-naked choke.

Even though this was the first time Nicolini has stepped inside a cage in over two years, she looked, and felt, more comfortable than ever. She also made it clear last night that she wanted more fights and ultimately, the belt.

Though we are waiting for a possible ONE Women’s Strawweight World Championship, it is a good bet that Nicolini, an eight-time Brazilian jiu-jitsu world champion, will be in the inaugural title match. Amir Khan certainly made an impression last night. The Singaporean proved in front of a hometown crowd that his game is certainly evolving, thanks in part to the world-class trainers at Evolve MMA.

Though the local favorite nearly finished Vaughn “The Spawn” Donayre with a rear-naked choke in the first round, the Dubai-based lightweight came out refreshed in the second stanza, and after some back-and-forth grappling, got a favorable position, locked in a deep kimura and torqued the submission with all his might.

Somehow, Khan survived, and in the third round the Singaporean Muay Thai champion did the unthinkable — he beat the Pan Asian BJJ Champion at his own game and submitted him with a rear-naked choke. 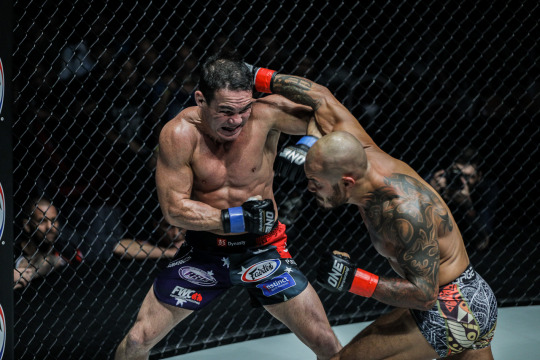 Highlight #4: Roger Huerta and Adrian Pang Put on a Show

Outside of the main event, perhaps the most exciting fight of the night was a lightweight showdown featuring Roger “El Matador” Huerta and Adrian “The Hunter” Pang.

These two warriors fearlessly exchanged strikes with one another all throughout the contest, with Huerta getting the better of the slugfest in the first two rounds and utilizing his wrestling more so in the second stanza. But a broken thumb sustained during the match would eventually slow him down, allowing the Aussie to become more dominant in the third round.

Huerta pulled away with a much-needed split decision victory, but even though both were tired, neither of these two backed down and they kept a lively pace going until the very end. It was non-stop fireworks and everyone loves that, especially ONE fans. The long rivalry of Singapore versus Malaysia raged on at ONE: DEFENDING HONOR, and the home nation got the win as up-and-coming flyweight Niko Soe locked in an armbar and left the Singapore Indoor Stadium roaring in delight.

Haidar tried desperately to fight out of it and he did all the right things, but the Singaporean was able to adjust his position, tighten his grip, and used his sheer strength to force the tap. He got the victory and, quite arguably, the most memorable submission of the evening.