Tough love from a caring father 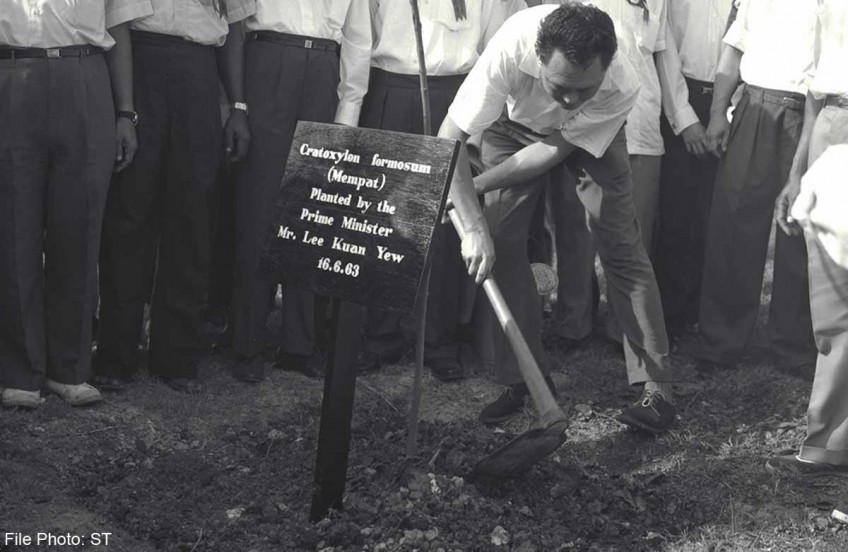 Former Prime Minister Lee Kuan Yew planting a Mempat tree on the Holland Circus to mark the beginning of his tour of the Ulu Pandan constituency in June 1963. This is to signify the start of an island-wide tree-planting campaign to help bring rain. Mr Lee envisioned that a clean and green Singapore would carry a competitive advantage.

The political system former Prime Minister Lee Kuan Yew built during his time was a British parliamentary system in form but truly a Confucian order in substance.

In Confucian ideals, the benevolent leader (emperor) is wise and compassionate and possesses the mandate of heaven (overwhelming popular vote).

The people are highly respectful of their leaders, single-minded in their common purpose and deeply loyal to their nation.

The state is administered by an efficient and educated class of mandarins based on meritocracy and incorruptibility.

There is a merchant class that is prosperous and a peasant class, which is harmonious.

Peace and order (lack of chaos) are the foundation of prosperity and progress.

These were ideals for ancient China, and proven in modern Singapore.

Viewed through Western media and its prescribed "universal" moral standards of governance, Mr Lee and his system have often been unfairly portrayed as oppressive, dictatorial and draconian.

In the East, this is wise, compassionate but strict leadership in the best of Confucian traditions.

In an imperfect world of compromises, many of us with Asian roots would value peace and security above freedom of speech and freedom of the press; economic empowerment before political liberation; and country, community and family before self.

Stop judging Singapore and our founding father by Western ideals (of liberal democracy, absolute freedom of speech, and so on) and you will start to appreciate what we really are and the archetypical benevolent leader that Mr Lee truly was.

As Mr Lee once said, he is answerable to no one, except the then two million lives at stake under his watch.

He did not seek to be popular or loved, but merely to serve his comrades to the best of his ability and up to his last breath.

A loving father who cared enough to be strict with his children, so we may grow up to be hard-working and disciplined, well conditioned to succeed and in harmony.

He knew that unlike large countries, we had no endowments to depend on and would, by default, starve to death if we did not have the will, unity and ability to succeed.

Tough love from a caring father - that is the founding father of Singapore that I know, love and revere for eternity