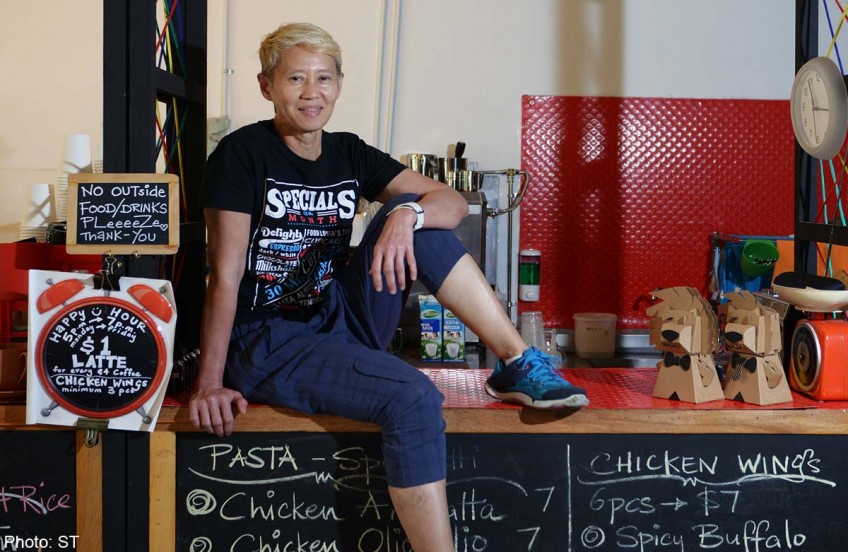 A "drug dealer" has set up a shop in Singapore Management University (SMU) but do not call the police just yet.

Ms Sim Swee Choo, 54, thinks of caffeine as a drug and loves how her job allows her to dole out doses of it to her customers.

She has been in the "drug supply" game since 2010 when she started SOHO7 cafe and bistro on Armenian Street with a partner. While the bistro did well, the enterprise has ended due to partnership issues.

Ms Sim then started 7KICKstart BREWiches at another location on Armenian Street, eventually moving to the Singapore Art Museum (SAM) in 2013 and re-naming the outlet 7Kickstart Museum Cafe.

In March, she opened 7Kickstart University Cafe at SMU, and she now has 15 employees altogether.

Ms Sim's journey in the food and beverage industry began much earlier though, from the time she worked as a manager in a burger and coffee eatery while pursuing her bachelor of commerce degree at Murdoch University in Perth, Australia.

She learnt a lot about coffee in the fast-paced environment as well as how to cook: "The place was very busy. If the cook didn't turn up, the manager had to cook."

These skills came in handy when she decided to start her own business after working for years in hospitality in various companies as well as in publishing.

"I manned the kitchen in SOHO7 and 7KICKstart BREWiches, and I was only relieved of my kitchen duties when we moved to SAM," she says.

"I was back to my happy self again", she says, with time to interact with her customers, which was what she truly enjoyed. "I love engaging people and helping them. I talk to all my customers and remember their coffee orders," she told The Straits Times, right before a customer walked in.

She greeted her exuberantly by name and recited her coffee order of "flat white, little sugar".

This spirit is the very reason Ms Sim started 7Kickstart.

"With technology, people have lost the art of conversing, getting together and just being happy together.

"There's so much coldness. I just wanted to bring back spirited conversations, whether it's the hottest gossip or political events. That's why I wanted to position this cafe as a community cafe, where the community meets."

Her interaction with her customers contributes a great deal to the success of her cafes.

Ms Sim gets her coffee beans directly from a trader instead of a middleman, which lowers costs. The trader gets her unique beans and roasts small batches for her, which most people cannot do.

Her connections helped her to open her two cafes with lower start-up costs than most: she spent about $100,000 on each outlet, including rental deposits.

One of her friends had known someone who was closing down his restaurant, and Ms Sim managed to get some equipment from him. The booths and tables in her SMU cafe were also bought second-hand at a lower price through another contact.

"I try to run a sustainable business by recycling as much as I can," she says.

The help she has received did not stop there. A lawyer who was a cafe customer offered to help trademark her brand of coffee for free. All she had to pay was the $390 licensing fee and she had the brand "Utama" trademarked.

Ms Sim has big plans for this brand. One idea is to launch traditional coffee such as one with a dollop of butter in it, among other ingredients, to make her signature concoctions.

Ms Sim hopes that these can be launched under her new "Utama by 7Kickstart" shop by this year to celebrate SG50. She has a location in mind, but has not secured it. "Trademarking the brand gave me a sense of ownership. It also gave me freedom as people won't try to take my name," she says.

Besides help from friends, Ms Sim has also received assistance in the form of the Productivity and Innovation Credit, which helped to fund the purchase of an automatic coffee machine.

But she gives back to the community around her. She has worked with an organisation that helps former prostitutes and she has hired some of them.

Ms Sim has also hired a person with chronic schizophrenia, saying that she believed her duty was to make sure that he was given training and skills so he could be employable.

"We provide a cooperative model, so if they feel that they're ready to run a restaurant or cafe together with me under the 7Kickstart brand, I'll finance everything and let them co-own with me."

Ms Sim and her 7Kickstart co-owners, Mr Malvin Foo and Ms Natalie Chong, plan to further promote their ice-drip coffee, which is rare here. They also plan to introduce nitro coffee (which is effervescent and cold) on tap.

Ms Sim hopes to trademark such drinks in future as well as open other outlets.

However, no matter how the enterprise expands, Ms Sim said the outlets will stick to community areas.

"Let them be places where the community can gather and be comfortable, just like going to a friend's place," she says.

This article was first published on May 13, 2015.
Get a copy of The Straits Times or go to straitstimes.com for more stories.