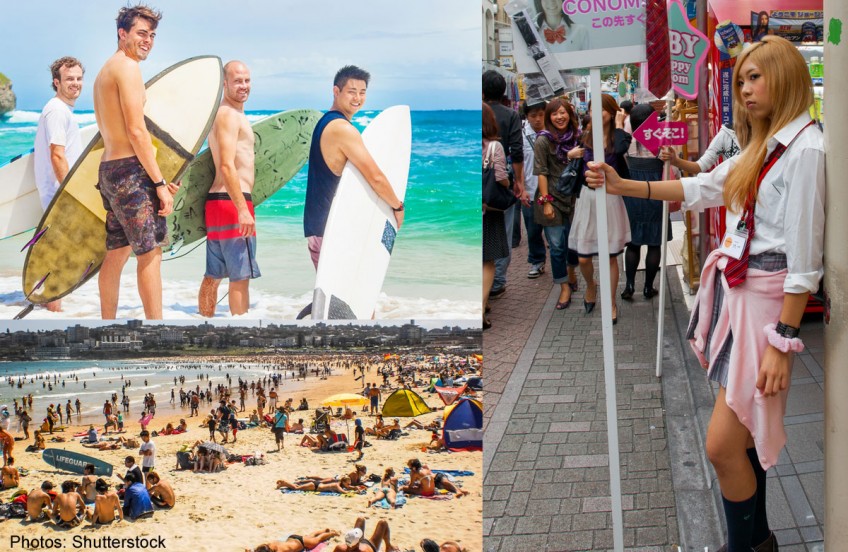 This article was originally published on the flight comparison site Skyscanner.

Eye candy everywhere! If you're looking to avoid eyesores on your next vacation, consider one of these destinations, where the people are just as beautiful as the scenery.

While everyone has their own definition of what makes a hottie, there are some common threads that connect these definitions.

A kingdom of beaches in a land of eternal summer, Brazil is a great place to see and be seen. Rio is home to the nation's best and hottest beaches, along with great food and the Amazon rainforest. While you're there, you can try to find some pickup futsal or volleyball games on the beach, or just watch. If you can't make it for the World Cup, you can always head there for another festive occasion, such as the Carnival, when the streets are packed with gorgeous revellers, or New Year's Eve, when upwards of two million people hit the beaches to celebrate.

You may have heard people say that Japanese women never get old or fat. On top of that, no one leaves the house unless they look impeccable. Appearances matter in Japan, and sometimes, the men are even more beautiful than the women. Healthy diets, healthy lives: and that perhaps explains why there are so many fine looking people walking around the streets of every major Japanese city. What are you waiting for?

Hollywood baby! Shakespeare once said "all the world's a stage", but at the time he didn't realise that every aspiring beautiful person in the world was planning to travel to America to make it in showbiz. Pick a coast; the beaches of Los Angeles are crawling with 10s, and the streets of New York are packed with models and actors. Choose your destination and come see the most beautiful people in the world strut their stuff.

This northern gem is filled with unearthly northern lights, unbelievably beautiful summers and stunningly cold winters. It's got history, amazing nightlife and more art and design than you could possibly know what to do with. The vibrant Swedish music scene has been the next big thing for many years now, and a night out here rivals most of the major party cities you can name. As an added bonus, the people of Sweden are taller and fitter than in most other places in the world. There's more to life here than Ikea, as you'll see for yourself during your next visit.

Maybe it's the accents, maybe it's the stylish dress sense, maybe it's the handsome Mediterranean features. Whatever it is, Italians are simply irresistible. Whether you're in the fashion hotspots of Rome, Milan or Florence, soaking up culture in Venice, or soaking up rays on the sun-kissed Tyrrhenian seashore, you are sure to fall in love at least once an hour. And if you play your cards right, you might even have a chance at amore. Ciao bella!

Who knew that during all those years of Cold Warfare, the Russians were hiding some of the most beautiful people on the planet? Moscow's got its share of arctic beauties, but many travellers are beginning to discover the charms of artsy and well-educated St. Petersburg, the European face of Russia. It's a romantic canal city, the Venice of the north, and you may just fall in love.

Women love rugged outdoorsy men who are good at sports and up for a laugh. Australia is crawling with these types of men: surfers, rugby players, and more. The cities are hip and the nature is stunning. The trip from the Northern Territories down to New South Wales will take you through a wild selection of stunning natural variety and introduce you to an astounding range of great-looking Aussies.

As a crossroads culture, Morocco has some of the most beautiful people on the planet, showing clear influences from Africa, Arabia and the Mediterranean. The cities throb with life, and the deserts offer an oasis of calm for the weary traveller. Sip a cup of sweet green tea while relaxing after a day at the Casbah and bargain hunting at the Zouk.

Sophia Vergara is Hollywood's latest Colombian knockout, and she well deserves the title. However, she is not the first, nor will she be the last, gorgeous Colombian in film. In fact, this up-and-coming South American country has no shortage of beautiful people to offer the world, including porcelain beauty pageant winners and tall, dark and handsome men with cool accents and mad football skills. Have we mentioned the natural beauty of Colombia's rainforests? This is a bucket list destination.

When Sabina Altynbekova was kicked off Kazakhstan's national volleyball team, it wasn't for reasons people normally expect. It wasn't for drugs, it wasn't for misbehaviour, it wasn't even for poor play. No, she was kicked off the team for being too hot. This Silk Road nation, sitting on an old trade route connecting Europe with the Orient, has many handsome men and beautiful women like Sabina that mix the best features of Europeans and Asians. And to top it off, has stunning wilderness and burgeoning cities as well. Fancy a bit of space tourism? Chances are, you'll be blasting off from the Baikonur Cosmodrome right here in Kazakhstan.

Click here for the original article or visit the flight comparison site Skyscanner for more.