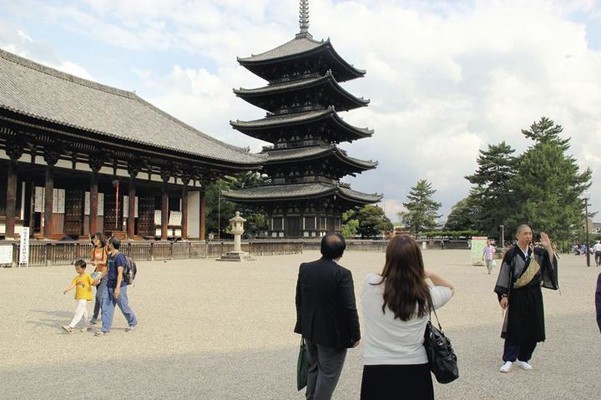 A monk guides participants of a tour designed around the concept of “school trips for parents and children” at Kofukuji temple in Nara.
The Yomiuri Shimbun

With the summer holiday season approaching, many people are thinking about where to go. One idea is to revisit places you visited on school trips - but this time with family members or friends.

There are tour packages and hotel services for adults to re-experience the joys of school trips by revisiting those destinations.

Groups using the tour include children, their parents and grandparents, with Kyoto and Nara pefectures popular. Sightseeing spots include Byodo-in temple in Uji, Kyoto Prefecture, and Horyuji temple in Ikaruga, Nara Prefecture.

One selling point of the tour is the special lectures offered at each destination. For example, before opening hours at Kofukuji temple in Nara, a monk guides visitors around the Kokuho-kan (national treasure museum), where the Ashura statue, a national treasure, is stored.

In March, a 66-year-old woman from Kohoku Ward, Yokohama, participated in the tour with her 40-year-old daughter and 10-year-old grandchild, who is a fifth grader in primary school. The woman was revisiting Nara for the first time since her high school trip about 50 years ago.

"Because I could have a leisurely visit this time, I rediscovered the attractiveness of Nara," she said. "I could share my memories with family members."

JR Tokai plans to offer a total of 11 tours this summer holiday season in July and August - six in Nara Prefecture and five in Kyoto Prefecture.

A two-day tour in which participants depart from Shinagawa Station in Tokyo is priced between ¥42,800 (S$572) and ¥43,800 for adults and between ¥31,800 and ¥33,800 for children. The fee includes Shinkansen bullet train tickets and accommodation.

Hoshino Resorts Inc. offers a tour package called Futa-tabi in which people visit Lake Towada, which straddles Aomori and Akita prefectures and other nearby sites. The lake used to be a popular middle school trip destination for students in Hokkaido in the latter half of the 1970s.

The tour package is priced from ¥32,860, which includes an overnight stay and two meals. Participants need to pay for their traffic expenses separately, and the tour is available until Nov. 23.

As part of the package, participants spend the night at Oirase Keiryu Hotel in Towada, Aomori Prefecture, and can enjoy tour features such as a guided excursion along the Oirase Keiryu river system and privately reserved open-air baths.

The company aims to attract people in Hokkaido and former residents of Hokkaido who now live elsewhere in Japan.

West Japan Railway Co. (JR West) and five prefectures in the Kyushu region, including Kumamoto and Kagoshima, are also promoting a campaign called Remember Kyushu until the end of March next year. The campaign aims to encourage people in the Kansai region to revisit Kyushu, which was once a popular destination for school trips and honeymoons among Kansai residents.

The campaign offers various services, such as assistance for visitors searching for ryokan inns or tourism facilities they previously visited. If visitors show photos of their past visits, they can receive gifts such as bath salts. Information about the campaign is available on a dedicated website and at major travel agencies.

Prof. Norihito Shiga of the College of Tourism at Rikkyo University said participants of such tours can visit sites and spend time relaxing, as opposed to children on actual school trips who have to visit many sites in a limited time.

"An increasing number of people are revisiting places they went to on school trips, not only with their families but also for class reunions. The demand for tours that revisit school trip destinations will likely grow, mainly among postwar baby boomers," he said.

What destinations are currently popular for school trips? According to research by the Japan School Excursion Association, which conducts surveys and research and offers advice on school trips, about 97 per cent of Japanese middle and high schools, including those located overseas, held school trips in fiscal 2014.

Okinawa Prefecture has become a highly popular destination for high school trips in recent years, partly because an increasing number of prefectural governments have allowed schools to use airplanes.

Research indicated that cities with a long history and where famous temples and shrines are located are still popular.