Bali has had enough of begpackers: Freeloading travellers to be sent packing

Ever since Bali first established a position on the tourist trail in the 1920s, the Indonesian island has become a haven for foreign travellers in search of sanctuary among its picturesque paddy fields, deep blue breaks and sacred temples.

From well-heeled proponents of "barefoot luxury" (with a firm emphasis on "luxury") to down-at-heel backpackers for whom budget is the buzzword, Bali has something for everyone. Well, almost everyone.

There is one type of tourist that the island's immigration office recently said is not welcome: the begpacker.

A product of the sort of entitlement only privilege affords, the begpacker has become a scourge across Asia, affecting everywhere from Bangkok to Kuala Lumpur, as well as here in Hong Kong.

Almost always white, the bedraggled begpacker often clutches a handwritten sign appealing for help. "I am travelling around Asia without money. Please support my trip," they might entreat passers-by, blissfully unaware that the cost of their round-the-region journey probably exceeds the annual earnings of the local residents they purblindly petition for help.

In Bali, begpackers have become such an issue that authorities have had enough.

"We have seen many cases of problematic tourists, lately they are either Australian, British or Russian," Setyo Budiwardoyo, who works at the Immigration Office of Ngurah Rai, in Bali, told Indonesian-language news portal Detik on June 25. "Foreign tourists who run out of money or are pretending to be beggars, we will send them to their respective embassies," he said. 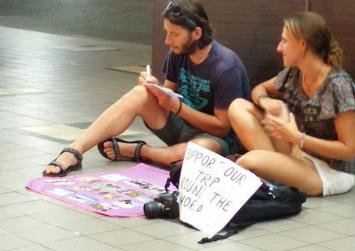 The idea of touching down in a country knowing you don't have the financial means to support yourself is surely unimaginable to all but the most self-indulgent traveller.

Particularly in a place where the tourist dollar (or rupiah) means such a lot to the local community.

Tourism accounts for up to 80 per cent of Bali's economy, according to a 2018 Vice magazine article, and has helped lift people out of poverty through an increase in employment opportunities and a rise in regional income.

While there are environmental arguments against the impact of the industry, Bali's residents are at least financially better off than they were a decade ago.

But only if visitors are willing to spend.

Those who aren't - whether Chinese tourists on zero-dollar tours, on which sightseers are wheedled into shopping at stores where all profits are siphoned back to China, or Western begpackers, who would rather sponge off the kindness of strangers than pay their way - are a financial drain on the island.

And a misplaced passport or a stolen wallet are no excuse, either.

Consulates and embassies exist to, among other things, help travellers in genuine need of assistance; although it should be noted that having made the "lifestyle choice" to travel off others' handouts probably doesn't fall under the category of "genuine need".

As far as Destinations Known is concerned, there is no romance to poverty and nor is there virtue in travelling the world for free. Someone has to pay for it, somehow, so it might as well be you.