Best honeymoon destinations for every month & every budget 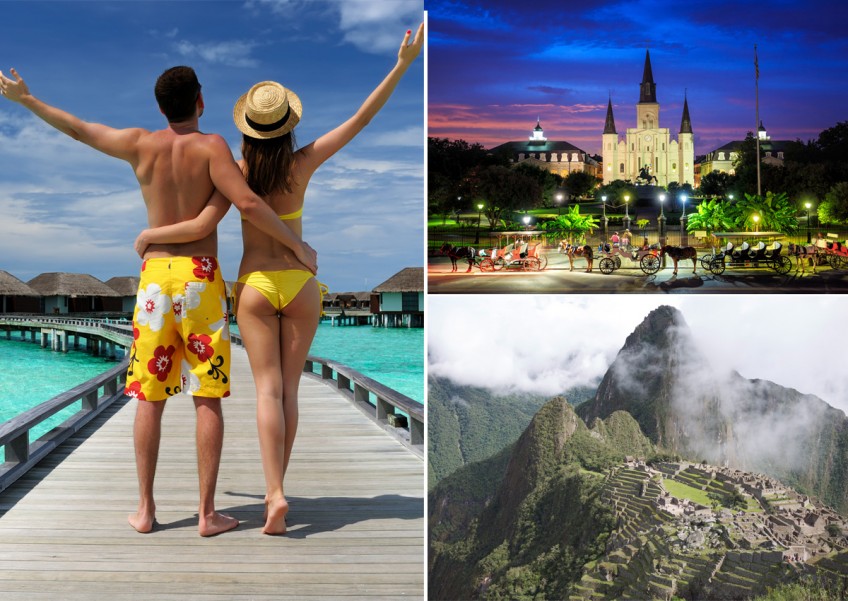 You've spent months fretting over the perfect wedding but chances are, the honeymoon wasn't your first thought. Now you're stuck with a date, some leftover spending money and the desire to get away somewhere truly special.

Worry not. Whether your budget is fully five star or you've got to be a bit more thrifty with your resort choices, we've hand-picked a honeymoon destination to fit every month of the year.

What could be more romantic than seeing the exhilarating blaze of the Northern Lights sweep across a blackened Arctic sky? Snuggle up tight in Reykjavik, at the elegant Hotel Borg, or soak in the outdoor hot tubs at Hotel Glymur, overlooking the spectacular Whale Fjord.

Average highs of 30 degrees C in January, top spa retreats and of course, those powdery white sand beaches straight out of the postcards.

The Maldives is the quintessential honeymoon destination and the ideal place for some post-wedding recuperation.

Try the small and romantic Maafushivaru island hideaway, where there are dazzling coral reefs just off-shore, or Velassaru which most certainly aims its private 'undressed luxury' suites at newlyweds - take a look at their 270 square metre Water Suite for a hint at true honeymoon luxury, the panoramic ocean views will capture your heart (and your purse-strings) instantly!

It's carnival time in Tenerife in February, so get ready to party surrounded by exuberant costumes, music, dancing and much feasting.

Get ready for some sunbathing too, as the weather in the part of Spain is usually mild at this time of year, with temperatures hovering around a pleasant 20 degrees C, and there are plenty of beautiful black sand beaches for you to settle on.

Stay at the five-star Jardines de Nivaria for a beachfront location in the Costa Adeje and outdoor massages.

Few cities are as romantic as Havana, with its crumbling mansions, palm trees and Latino music - not to mention those zesty mojitos.

Check out the elaborate cabaret at the Tropicana, see where Hemingway wrote (the Ambos Mundos hotel) and drank (El Bodeguito del Medio) and check in to the Sarasota Hotel for the best rooftop pool in town.

Ok, so it's going to be a little chilly but who cares when the backdrop is this gorgeous? Bruges is one of Europe's fairytale cities, its medieval buildings reflected in numerous picturesque canals.

Fly to Brussels and take the hour and a half train ride to Bruges, before jumping into a horse-drawn carriage and riding like Cinderella and her Prince Charming through the cobbled streets.

Retire to the five star Hotel Dukes' Palace, to sleep in your very own turret and wake up to a champagne and Belgian chocolate breakfast.

Fancy honeymooning on the Queen's favourite ship? Step aboard the Hebridean Princess for the ultimate romantic cruise around the Hebrides.

You'll discover the gloaming, Scotland's gorgeous twilight, and eat some of the best produce the country has to offer. All while touring the isles from Skye to the Orkneys and dropping anchor in harbours too small for most other ships.

Seville can lay claim to being Spain's most Spanish city, home to tapas, flamenco and more oranges than you can shake those maracas at.

Stay central at the Gran Melia Colon and you can check out the Gothic cathedral and Moorish architecture by day and hit the tapas bars at night - don't miss the jamon iberico ham at El Rinconcillo.

April is the perfect time to visit the steamy city of New Orleans as it gears up for the annual Jazz Festival.

There are plenty of opportunities for spontaneous romance: sugar-dusted beignets at Cafe Du Monde, a horse and carriage ride around the French Quarter, following your ears for live music in the streets.

Edinburgh is arguably the UK's most romantic city, with an ancient castle brooding atop a volcanic rock as its centrepiece.

Stroll the Royal Mile, climb up Arthur's Seat (another inactive volcano) and dine on fresh Scottish seafood at the waterfront in Leith.

Stretch the honeymoon budget for Restaurant Martin Wishart for a real celebration.

Explore a whole new world together at Ningaloo Reef, the world's longest fringing reef, just off the coast of Western Australia.

Sleep under some very luxurious canvas at eco resort Sal Salis and you can swim with the fish - and the turtles and the dolphins - every day. By night, you might even see a kangaroo joining you for a snooze on the terrace.

No country in Europe has a coastline more beautiful than Croatia, nor water as clear. Don't believe us? Check it out for yourselves on a trip up from Dubrovnik to Sibenik.

Stay in the Karmen Apartments to walk Dubrovnik's stunning defence walls and swim from the rocks at the Buza bar before heading north to discover Sibenik and the brand new waterfront D Resort Sibenik for trips to the offshore islands and great spa treatments.

Fancy an active honeymoon? How about hiking the Inca Trail in Peru, reaching Machu Picchu at sunrise?

If three days walking is a little too much, you can drive up to the ancient Inca site instead, but either way be sure to relax afterwards in the hot waters of Aguas Calientes.

Don't miss the city of Arequipa, framed by volcanoes and baroque buildings, and Cusco, the capital of the Incan empire.

The summer is the perfect time to stay local in England, and there's nowhere better for catching some rays than the idyllic south coast.

Find yourselves in the New Forest at the wonderful Pig in the Forest for woodland walks with the ponies before heading south to the Pig on the Beach, at Studland Bay, encircled by white chalky cliffs.

Both hotels have kitchen gardens - and superb restaurants.

It's Great Wildebeest Migration season in Kenya's Maasai Mara National Reserve at this time of year, so why not make your honeymoon a safari?

Check in to the Mara Serena Safari Lodge for your best chance to see it, with two daily game drives, sundowners in the bush and breakfast by the hippo pool.

Ljubljana is at its loveliest in the summer; pastel buildings picked out by the sun, trees in full blossom.

Take a river cruise along the Ljubljanica, or the funicular up to the castle, and discover why Slovenians like to keep Slovenian wine all to themselves!

For a romantic viewpoint over the city, climb up Smarna Gora, the city's highest hill.

Java is often humid, but August sees clear skies and just-right temperatures (around 27 degrees C) on this island in Indonesia.

Blue-fire volcanic lakes and deserted beaches await, but the highlight of any trip to Java has to be Borobudur, an epic complex of stupas that is one of earth's largest monuments to religion.

Get here for sunrise for an extra dash of magic on your honeymoon.

Be two of the first to walk brand new coastal walk The Gobbins, along the coast of Antrim in Northern Ireland.You'll duck under stone-cut archways, cross metal bridges and pose for pictures in places you would never imagine could be reached.

Afterwards be sure to call in at the Giant's Causeway, ideally by kayak to avoid the crowds.

Italy is tailor-made for honeymooners, and the Amalfi Coast is iconic, its churches and town squares clinging to one of Europe's most beautiful coastlines, cliffs towering high above town belltowers.

Base yourselves in Positano at Le Sirenuse, for views over the Tyrrhenian Sea, cocktails on the terrace and Michelin-starred dining.

It's a short walk to the beach from here, and ferries across to the jewel-like Isle of Capri.

Relax in the autumn sun after the rush of your wedding and choose the Canary Island of Lanzarote, its white-washed curves sitting atop black lava.

Check in at the heart of the island, at Finca Malvasia and spend your days touring underground geological wonders and the surreal artistic creations of native sculptor Cesar Manrique, or discover the breathtakingly high village of Haria.

A road trip more your style? Make it a classic, from San Francisco south to San Diego and along the California coast.

You'll see the Golden Gate Bridge and call in at Monterey Bay before reaching Big Sur, a dramatic stretch of coastline where Glen Oaks offers woodland cabins, each equipped with their own fire pit.

Head on south to the bright lights of LA and finally to laidback San Diego, for fish tacos on the beach.

Yes, there's that long-haul flight to pay for but stick with us - Vietnam is one affordable destination once you get there. Dinners for a pound (S$2), beachside villas for less than 30 pounds and a beguiling culture that is yours to explore for free.

Spend a few days in energetic Ho Chi Minh City and don't miss Hoi An, a UNESCO-awarded port town too pretty to be real.

It's also home to Miss Ly's, the sort of restaurant you'll be waxing lyrical about to the kids years later.

Sydney is really hotting up for summer by now and makes the ideal first honeymoon stop, with its gorgeous harbour and iconic Opera House.

See it all from the very top of the Harbour Bridge with BridgeClimb before striking out north, for Queensland and the Great Barrier Reef.

Take a cruise around the Whitsundays for superlative snorkelling and diving.

London is at its most romantic in the run up to Christmas, when strolls in the park end with open fires and mulled wine in ancient pubs.

Book in to The Arch and you'll be within shopping bag swinging distance of Oxford Street - and its Christmas lights.

Don't miss a trip to Tower Bridge, to see the new glass floor, and up the Shard, for expansive views over the city.

It's the height of summer in South Africa so fly down to Cape Town for beaches, wineries and the climb up Table Mountain.

Check out Boulders Beach to see the penguins before heading north to the (malaria-free) Madikwe Hills for some slightly larger beasts - lions, zebra and giraffe.