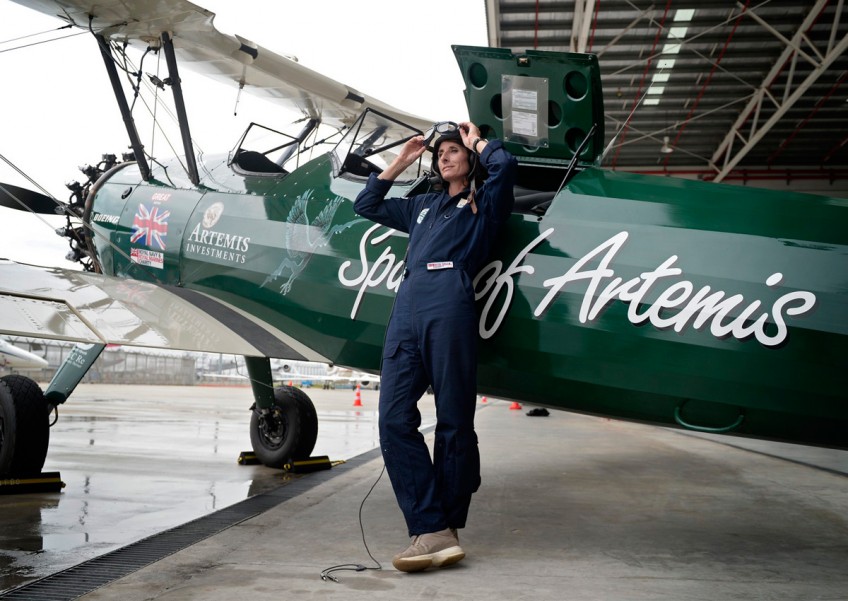 British aviator Tracey Curtis-Taylor flew her open-cockpit biplane across Sydney Harbour and landed at the city's international airport on Saturday (Jan 8), completing a three-month journey from England to retrace a pioneering feat of early aviation.

The 53-year-old aviator set out from Farnborough on Oct 1 to follow the flight path of legendary aviator Amy Johnson, who in 1930 became the first woman to fly solo between Britain and Australia.

"I need a drink," Ms Curtis-Taylor told the waiting media as she climbed from her 1942 Boeing Stearman and was handed a glass of champagne.

"Seeing all the most iconic landscapes, geology, vegetation, just the best view in the world," she said. "Very few people get to fly it like I just did." Braving sea spray and smog in her "Spirit of Artemis", a reconditioned piston-engine plane, she crossed 22,000 km and 23 countries using 8,000 litres of fuel.

She had struggled to secure supplies of "avgas", or aviation gasoline, not readily available at many modern airports, and relied on a support plane that followed behind. "In doing something like this you have to be absolutely self-sufficient," Ms Curtis-Taylor told Reuters in an interview before her arrival.

"We have done something like 54 stops and that is what takes the time." Her challenges included scrounging for fuel with the help of Aborigines after an impromptu landing in the Australian outback, and spending a day scraping salt off her propellers after flying over the Timor Sea.

In the post-9/11 world of aviation security, she also encountered wary airport officials, especially after the Paris attacks in November and the downing of a Russian airliner in Egypt the month before that. "Everything is in high alert," she said.

Bad weather in Romania held the flight up for days, and she had to fly around war-torn Syria. She has met royalty and took a Saudi princess for a spin in the aircraft. In Jordan, underprivileged girls she met were amazed by her audacity at undertaking the journey at her age.

It is a far cry from the world of 1930. At that time, most of Ms Johnson's stops lay within the British empire. Red tape was minimal.

Ms Johnson was just 26 and her flight ended in Darwin, Australia, which her successor Curtis-Taylor reached on Jan 1 this year. This week marked the 75th anniversary of Ms Johnson's death, at the age of 37, in a flying accident in England during World War II.