Camel safari in the desert 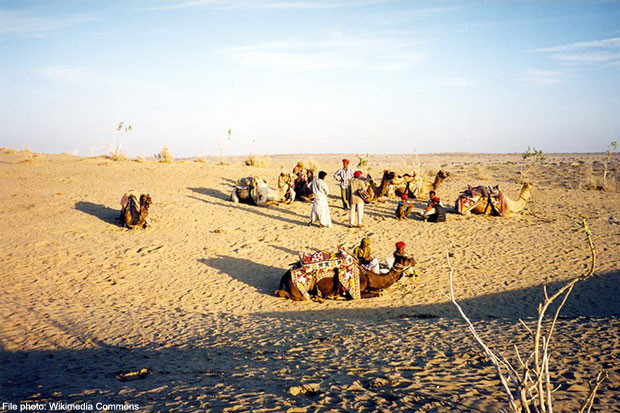 I wriggled and adjusted myself on the cushioned saddle fastened to Ladin, my camel. With a jerk, I was thrown forward leaning at an angle, almost falling over before regaining my balance when Ladin's front legs straightened.

My camelman Nara was busy securing the ropes on the convoy of camels. He did a last check on the equipment, water and groceries and we set off.

I was exploring Jaisalmer, the westernmost city in India, just 100km from the Indo- Pakistan border. Located in the heart of the Thar desert, this is one of the oldest living fortified cities in the state of Rajasthan.

We stopped at a desert village where life is still primitive. Huts are made of mud, covered by twigs and straw. Villagers rear cows and goats.

As I left the village, I saw several women with buckets of water balanced on their heads.We trudged through the dunes under the cloudless sky before we hit a pitstop - an unusually lush tree in the desert. Nara untied the saddles and unloaded all necessary items needed for lunch before letting the camels roam free. With a wok, some flour and water, chapatis were made and served with ever-refreshing chai (tea).

After an afternoon nap, Nara ventured out to bring back Ladin and company and we resumed our journey. The safari not only allows travellers to view animals roaming the treacherous Thar desert, it also provides close interaction with the camels. I was enthralled when I was able to lead Ladin to the nearby waterhole to quench its thirst.

As night fell, Nara set up the campfire to keep us warm before cooking dinner which consisted of the same fare as lunch - curry, chapati and pakora. Nara levelled the sand and laid out a thick "bedsheet" for me. I covered myself with two blankets to combat the 10 deg C chill accompanied by Afswirling winds. With traditional Hindi music from Nara's mobile phone in the background, I dozed off.

From a distance, the Jaisalmer fortress rose prominently like a gigantic sandcastle. Houses, havelis (private mansions) and the fortress glistened in the sunshine as they are built from the yellow-tinged sandstone.

The declining desert town was once an important outpost along the Silk Road, traversed by merchants on camel caravans.

The bazaar beneath the fortress, where merchants gathered in the old days and still do, was once the hub of trade in spices and camels, as well as groceries and water.

The glorious days of Jaisalmer faded after the emergence of the sea route as the preferred mode of transport. Trade in Jaisalmer dwindled further when the partition of India in 1947 left it as no more than a drought-prone town stranded between international borders.

Ironically, the frosty relationship between India and Pakistan gave Jaisalmer strategic importance. The Indian air force and army both have military bases nearby. Together with rejuvenated tourism, this helped to boost livelihoods on the western frontier.

The scorching sunshine, intensified by the golden sandstone, encourages travellers to explore the city in a more comfortable temperature. Take a walk down the cool alleys between the buildings. Colourful handicrafts, ornaments and textiles are strategically decked along the walls and in front of stalls. Streets and alleys can get a little crowded, with wandering cows and boys playing miniature cricket. An alternative to avoid the mid-day heat is to explore the palace. Home to the Maharajahs, the palace has well-designed interiors with intricate balconies and windows.

The sunset is brilliant from the viewpoint north of the fortress. The paranomic view is speckled by several kites flown by kids from rooftops.

- There are many direct flights to Indira Gandhi International Airport (New Delhi) from Singapore via Air India, Jet Airways and Singapore Airlines.
- The Delhi-Jaisalmer Express leaves Delhi at 5.30pm and reaches Jaisalmer at 11.30am next day.

- Many guesthouses can be found within the fortress and just outside. Rates start from 300 rupees (S$6) for a basic room.

- There are many rooftop restaurants with unique designs in Jaisalmer. Thali, a spread of various dishes, along with the local chai (tea), should not be missed.

- The duration of the camel safari can be customised from half a day to up to 21 days. The cost to rent a camel from Ganesh Travels for one day and one night is 1,050 rupees. Website: www.ganesh-travels.com.

- The railway system in India is developed but may be confusing to firsttimers. Visit http://www.indianrail.gov. in/ to check on the various train codes, train names and times before making reservations online.

- Scarf, sunshades and sun block lotion are useful items to take on the camel safari. November to January are generally the best months to visit when it is cooler.
- Verify that the seal on bottles of mineral water is intact before you buy. Bring charcoal tablets and antibiotics.
- While Hindi is the official language, most locals, especially those in the tourism industry, are able to converse in English. Useful phrases in Hindi to learn: Hello - "Namaste"; Thank you - "Shukriya"; and Good, Okay - "Accha".

This article was published on April 29 in The Straits Times.