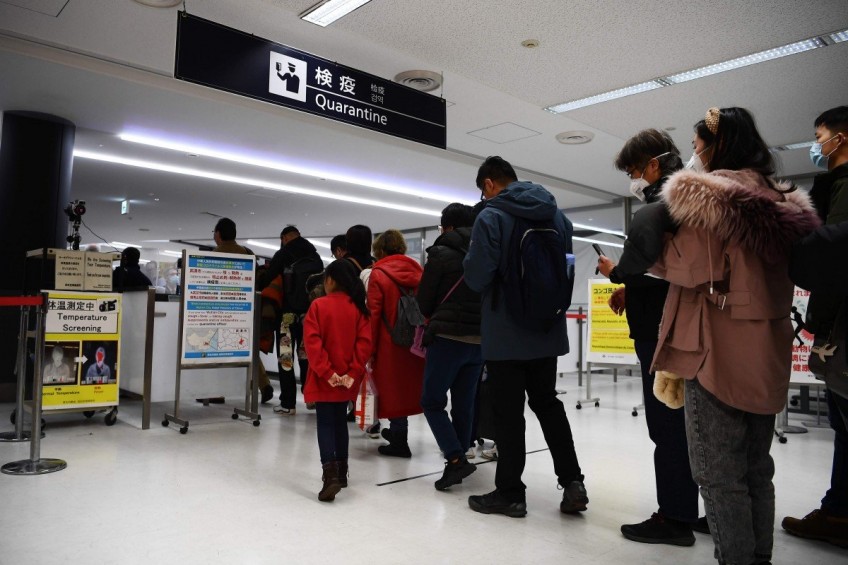 Chinese embassies have urged citizens travelling overseas to comply with airport health checks put in place in response to the coronavirus outbreak.

It comes after a woman from Wuhan - the central Chinese city where the outbreak began - posted photos of herself at a restaurant in France on social media, saying she had been feeling ill when she travelled to the country so she took medication to bring down her temperature before arriving at the airport.

The Chinese traveller wrote that she had flu-like symptoms before she left Wuhan.

"I had a fever and a cough before I left - I was so scared. I quickly took some medicine and checked my temperature. Luckily the temperature was controlled and I had a smooth journey through the border," the woman wrote on social network WeChat, according to Chinese news platform Sohu.

It is not known which airport in France the woman travelled through, or when she arrived.

Her post met with criticism on social media, and the Chinese embassy in France responded on Wednesday night with a notice calling on citizens to comply with border checks.

"Our embassy has received multiple phone calls and emails from Chinese nationals regarding a woman from Wuhan who posted on social media about deliberately taking fever medication in order to evade the airport temperature checks," the notice posted on the embassy's website read.

"We attach high importance to this incident and were able to contact Ms Yan, who is involved in this incident. We have requested that she call the French emergency hotline [for her case] to be handled by the relevant departments."

French authorities meanwhile said they would separate any passengers arriving in the country who had a fever so that they could be assessed by emergency health personnel.

Other Chinese embassies, including in the United States, South Korea and Thailand, have issued similar notices to nationals travelling abroad.

More than 570 people have now been confirmed as infected with the pneumonia-like virus, with 17 deaths since the outbreak began in late December. Outside mainland China, cases of the new coronavirus have also been reported in Macau, Taiwan, the US, Japan, South Korea and Thailand.

Chinese experts have confirmed that human-to-human transmission has played a role in the outbreak, and Wuhan is now in lockdown, with all public transport in and out of the city stopped on Thursday morning as authorities try to limit the spread of infection.

In a separate notice on Thursday, the Chinese embassy in Washington advised there would be extra quarantine measures for travellers arriving from Wuhan at five US airports.

New York, San Francisco, Los Angeles, Atlanta and Chicago are all conducting checks for fever and other symptoms of the virus on passengers arriving from the Chinese city. The measure was put in place after the first confirmed US case of the coronavirus was reported in Washington state on Tuesday.

In Britain, passengers arriving in London from Wuhan are being placed in isolation to be screened for symptoms. Other countries have put similar measures in place.

Those arriving in South Korea, where a case of the coronavirus has been confirmed, are required to fill in a health declaration form. And in Japan and Thailand, where virus cases have also been found, screening has been stepped up on travellers from Wuhan.

China is heading into one of its busiest outbound travel seasons with the week-long Lunar New Year holiday beginning on Friday. Last year, more than 6.3 million outbound tourism trips were taken over the holiday period.

That figure was expected to exceed 7 million this year, but the virus outbreak may cause holidaymakers to get the jitters and change their plans.

China's Ministry of Culture and Tourism also tightened the approval process for overseas tour groups departing from regions affected by the outbreak on Wednesday. And the Wuhan city government has now banned tour groups from travelling to and from the city.

In the Cambodian resort town of Siem Reap - gateway to the ruins of Angkor Wat and a popular destination for mainland Chinese - a local tour guide said he had heard about the coronavirus outbreak but there had been no warnings from the government.

"I have not received any alert from local authorities, and we are seeing a lot of Chinese tourism now," said the tour guide, who gave his name as Adun.

The Cambodian embassy in China did not reply to a faxed request for comment.