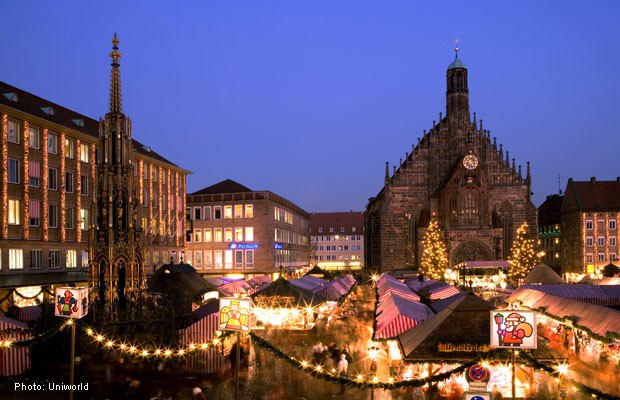 Nuremberg is your quintessential mediaeval city with an added advantage: it is home to one of Germany's oldest and largest Advents markets every winter in Europe. Called the Christkindlmarkt or the market of the Christ Child, Nuremberg's event is indeed very child-friendly, with many performances and processions just for children.

The city is also famous for specialities such as the lebkuchen or spiced cakes that Germans eat at Christmas, and the string of Nuremberger bratwurst which are short, stubby sausages fried on the spot, served with ketchup or mustard and accompanied by sauerkraut or potato salad.

You can eat the sausages in combinations of six, eight, 10 or 12, which is the local way. And no, Nurembergers - the people, not the sausages - don't look any bigger than Germans from other cities.

When I was there 20 years ago, I also remember a cup of hot chocolate so thick the spoon literally stood in the middle of the cup.

And oh yes, the cup! Every market has its own cup which you can either keep or return afterwards to the stand for a refund. It makes a good souvenir.

Most of all, I remember there was an elaborate Gothic fountain surrounded by a metal grille in the middle of the town.

Built into its filigree railing is a golden ring - which when touched supposedly makes one's wishes come true. Now, I have lit my fair share of candles in cathedrals and thrown plenty of coins into fountains, but this ring seemed particularly potent to me.

Recently, I found myself in Nuremberg again, this time in the middle of German schools' summer vacation.

At other times besides Christmas, Nuremberg holds annual festivals or performances of sacred and organ music, which can range from a Gregorian concert at St Sebald Church early in the year and a flash-mob Beethoven's Ode To Joy performance in the old town square in June.

Past the cafes and churches, I stood before the fountain with the ring, once more.

In the midst of the Christmas crowd, I'd missed out on all the details so many years ago.

The 19m-high fountain is actually a pyramid stacked with 40 figures representing Biblical characters, the ruling parties of the day but also Christian and Jewish heroes.

My first wish has come true - a baby who has since become a tall, strapping lad about to embark on his own backpacking trip to see the world.

At the risk of seeming greedy, I touched the ring somewhat tentatively again.

Fly to Munich or Frankfurt and commute by train as the local airport serves mostly domestic and regional flights. It takes about 75 minutes from Munich Main Train Station and 2 hours 20 minutes from Frankfurt to reach Nuremberg.

■ Bundle up and visit Christkindlmarkt, which starts on the first Advents Sunday around Nov 20.

■ If you visit in June next year, catch the International Sacred Music Festival. Look out for a non-traditional programme, including a yoga session accompanied by the organ and a screening of the 1923 silent film The Hunchback Of Notre Dame accompanied by live music.

■ Restaurant Heilig-Geist-Spital (Spitalgasse 16, 90403 Nuremberg) is a former hospital and home for the aged dated back to the 14th century but today a popular restaurant. For vegan options, head for Lotos Naturkostladen at Am Unschlittplatz 1, 90403 Nuremberg.

This article was published by the Special Projects Unit, Marketing Division, SPH.

This article was first published on October 28, 2014.
Get a copy of The Straits Times or go to straitstimes.com for more stories.