Up-close with rare animals at cafes in Seoul 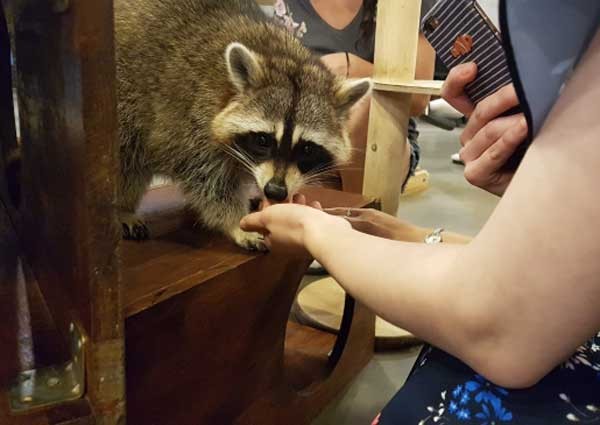 In recent years, a host of cafes with furry creatures rarely seen in the city have popped up around Seoul.

Most of the cafes are owned by enthusiasts who began raising the animals at home as pets, but decided to open a shop when their numbers got out of hand.

Dozens of local visitors and foreign tourists were spotted in such cafes, concentrated in the Hongdae area, on a Tuesday afternoon. Some cuddled the animals, while others observed with curiosity.

There were also those who just sat and sipped their drinks in the presence of the rare creatures.

Before entering the Raccoon Cafe located in Hongdae, visitors are required to stow their bags in lockers and empty their pockets, as raccoons tend to rummage through things, according to the trainers there.

The raccoons and dogs get along well, chasing each other playfully or napping together.

"I started by just raising one. I got another in case he got lonely and the numbers just grew," said the cafe's owner Shin Myung-ho, 30.

After being drawn to the animals' cute appearance, Shin soon discovered that the medium-sized mammals were quite high-maintenance and required thorough training, as they are prone to biting humans.

Raccoons know what they want and are straightforward in expressing their demands, Shin said.

"If they don't want to be bothered, they let it show," he said.

"We watch their behaviour and if we feel like they might show aggressive tendencies, we let them relax in a cage for a while."

Raccoons tend to exhibit wild instincts despite domestication. They have irregular sleeping hours and eat almost everything, from animal feed to fruit and chicken, he added.

Shin, who runs the cafe with his wife, also takes the animals for regular check-ups at specialised veterinarian clinics.

A growing number of people are raising unusual pets at home, said Shin, such as foxes, snakes and tarantulas.

"Some people come to the cafe to check out raccoons because they're interested in adopting them," he said.

"Others come because they want to have pets but they can't."

At Meerkat Friends, which opened in January, visitors will find 18 meerkats, a wallaby, an arctic fox, a silver fox and two cats.

The meerkats, small, burrowing animals that originate from South Africa, are kept inside a glass enclosure in the centre of the cafe, where visitors can take turns entering for limited periods of time.

The cafe's owner, Koo Jung-han, 45, previously ran an online shopping mall for pet products and had raised squirrels and porcupines at home before adopting meerkats through an acquaintance.

"I discovered that they're very charming creatures," said Koo. Meerkats are extremely affectionate, seeking their owners and cuddling with them when they go to sleep, he said.

"If you give them plenty of care, a lot of animals besides cats and dogs are able to recognise their owners, which is why people want to try raising unusual animals," he said.

Koo decided to open a cafe when it became too much to raise all his animals at home.

"Meerkats love having fun and being mischievous, so they would scratch all the wallpaper at home. I figured a cafe would be a great place to care for them and let others enjoy them as well."

Only animal lovers would be able to run the business, he added.

"First of all, they're quite pricey," he said. At a bargain, meerkats can be bought for around 2.5 million won (S$3,043); several years ago, they used to be around 6 million won.

"You have to devote so much of your time and money to caring for them," said Koo.

"If not, (the cafe) will become focused on commercial purposes. If you just let the animals loose, accidents are bound to happen."

After frolicking with friendly critters, visitors may want to venture to Thanks Nature Cafe to enjoy the calming presence of two lambs -- Anna and Sam, born early this year at the Daegwallyeong Sheep Ranch in Gangwon Province.

The sheep are housed outside in a special wooden enclosure, equipped with fans -- sheep tend to get hot with their wool coats.

Nipping away at their feed or simply bobbing around, the snowy, docile creatures bring a sense of peace to the observer.

The cafe was opened six years ago by owner Lee Kwang-ho who wanted to bring nature into the city.