Coming through the Rhine 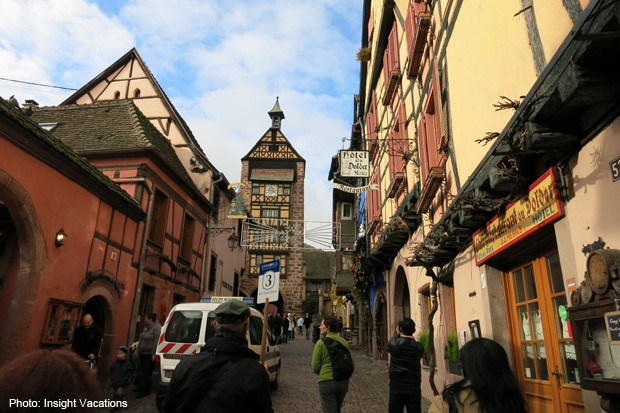 GERMANY - Travelling up the Rhine river gives unique insights into Germany, its less famous towns and its culture and history.

Germany is known for big cities such as Berlin, Frankfurt and Munich. But exploring its lesser-known towns, which are equally rich in culture and history, can give unique insights into the country.

A cruise up the Rhine river did just that for me. As I travelled upstream from Basel in Switzerland to Amsterdam in Netherlands on an itinerary called Castles Along The Rhine, our cruise ship - run by the boutique American cruise line Uniworld - docked at several small towns and storybook villages that I would have never visited on my own.

I arrived in Basel early last month, along with a group of seven other journalists and travel agents, as part of a familiarisation trip organised by Uniworld. Our trip started rather inauspiciously, when we landed in Basel and were told our ship had not made it there because of high waters.

Instead, it was docked in Breisach, Germany, and we would have to get there by bus. The hour-long bus trip - on the heels of the 17-hour journey by air from Singapore we had already taken - was soon forgiven, when we were warmly welcomed onboard the S.S. Antoinette.

The luxury ship is decorated in a style reminiscent of late 18th-century France, with opulent marble floors and walls, and a 3m sapphire-studded chandelier as the ship's centrepiece, hanging over its main spiral staircase. In addition to amenities such as a heated swimming pool, fitness centre, spa and a laundry room for guests, the ship also boasts a 3-D movie theatre. Rooms on-board the ship consist of eight one-of- a-kind suites and 69 staterooms in categories one through five. I stayed in a Category One stateroom - which included a full balcony with an armchair to look out at the passing river - and shared it with another journalist. The room was small, but we were impressed by its luxuriant comfort.

Most of the passengers on the cruise ship were American retirees who had seen the main European sights and were looking for something different, but packaged in a manageable way. The cruise delivered exactly that.

With the boat docked at Breisach, the first day's tour took us over the border to the French region of Alsace, home to a 170km stretch of vineyards and quaint hillside villages known as the Alsatian Wine Route. The hour-long drive to the wine villages of Kaysersberg and Riquewihr flew by as we drove through postcard-perfect undulating hillsides, corn fields and rolling vineyards that stretched as far as the eye could see.

Kaysersberg and Riquewihr turned out to be villages straight out of a storybook, with cobblestone streets, houses made half with timber and half with stone and balconies decked with flowers.

While Kaysersberg was pretty and undoubtedly worth the visit, Riquewihr was the clear winner in our brief survey of Alsatian wine villages.

We quickly ran out of things to do in Kayersberg - after admiring the cobblestone pavements and deliberating over crepe shops - but Riquewihr boasted traditional inns and wine cellars sprinkled among the half-timber homes.

Our tour guide joked that when he used to live in the village, he never got anything done because he felt like he was in a dream every day, and it was not hard to see why. Visitors to the town should plan to go in November or December, when the festive cheer is in the air. The flower-decked balconies bore Christmas wreaths and smells of pain d' epices, similar to gingerbread, wafted out of every third shop.

Try kougelhopf (€3, or S$5.20, for a small one), a sweet bun with raisins marinated in fruit brandy that is a speciality of the region, and freshly baked macaroons at the Maison Alsacienne Biscuiterie (60, rue du general de Gaulle, Riquewihr, open 10am to 6.30pm daily).

The ship made its way next to Kehl, Germany, where it docked for the day while we made our way by bus back to France.

The highlight of the city of Strasbourg is undoubtedly the Strasbourg Cathedral, also known as Cathedrale Notre-Dame, which is widely considered to be one of the finest examples of Gothic architecture in the world and among the most stunning cathedrals in Europe. Built over three centuries, it is the highest stillstanding structure that was built entirely in the Middle Ages.

While the cathedral's berth and stained glass windows are awe-inspiring, be sure to go with a guide so you can pick up interesting trivia too.

There is, for example, a cute story behind the tiny statue of a dog sleeping at the base of a carved stone pulpit. It involves a clergyman who preached such long sermons that his pet dog would fall asleep.

The dog has become a lucky charm of sorts, with local lore saying that those who rub its head would be blessed with longevity. Lines formed immediately to do just that when the tour guide announced this.

Our next docking point was Mannheim, Germany, from where we drove 20 minutes to the small town of Speyer. Our local guide proved invaluable here as many locals did not speak English. Our group drew more curious looks here than at our previous stops.

A walking tour of the town threw up interesting tidbits, particularly about its Jewish quarter, where Jews had settled as early as 1084 and lived with protection and privileges for centuries before they fell prey to anti-Semitism and persecution. The town still boasts the ruins of a synagogue as well as a mikveh, a traditional Jewish bathhouse.

While there was only one excursion on most days - a three-hour morning affair after which we were welcomed rapturously back on board the ship with hot towels and hot cocoa - guests had the option of heading out after lunch for a second excursion on this leg, to the old university town of Heidelberg.

Perhaps better known for its references in pop culture - such as the 1925 Fred Raymond song I Lost My Heart In Heidelberg, as well as a passing reference in J.K. Rowling's Harry Potter universe - the city should be on any traveller's itinerary for its castle ruins and picturesque Old Town.

While I was bemused by the hordes of uniformed Japanese school children I saw in the city - the place does not seem like it would be an Asian educator's top pick in history-rich Europe for a field trip abroad - Heidelberg locals did not bat an eyelid. According to them, Japanese are the second biggest tourist group after Americans in the city, for reasons they are not sure of themselves.

While in Heidelberg, be sure to sample Heidelberg Student Kisses at a local sweet shop. These are confections with a nougat and chocolate centre on a waffle base and covered with dark chocolate. They were invented in the city and are sold only here. They are available for €1.75 at Cafe Knosel (Haspelgasse 20, Heidelberg, open from 11am to midnight daily).

There was a frisson of excitement when we arrived at Rudesheim, Germany, the next morning. It was the day many of the travellers had told me they were most looking forward to - it promised the first sightings of the "castles along the Rhine", as our tour was named.

But first, we took a trip to the Schloss Vollrads, or Castle Vineyards, an 800-year-old wine estate famous for its Riesling. During a guided wine-tasting, we sampled three wines of increasing sweetness in three rooms of a large manor house, after which we were free to wander the compound or pick up some of the wines we had tried. Travellers on this itinerary may want to save all their luggage space or alcohol allowance for the visit to Schloss, as there is a wine to suit every palate for a reasonable average price of €11 a bottle.

Then came the highlight everyone was waiting for.

That afternoon, the ship began its cruise through the most romantic part of the Rhine river, dotted on both banks with nearly 30 mediaeval castles. The cruise manager kept up a running commentary, identifying the castles and giving guests a bit of history about each. While most guests started out standing in the open-air upper deck, the cold quickly got to many. Along with most of them, I headed down to the heated lounge to listen to the commentary and watch the castles float past the windows from the comfort of the warm lounge. While cruising down this portion of the Rhine, look out for the Loreley, a rock that rises 120m above the water and marks the narrowest part of the river between Switzerland and the North Sea. Only a very narrow portion of the river here is navigable, due to a strong current and rocks. This has caused several boat accidents in the area and given rise to a legend of a maiden who sits on the rock and distracts sailors with her singing.

Koblenz was the ship's next stop, and the walking tour on this day proved to be one of the least distinctive on the trip. Koblenz is a perfectly pleasant small city that I might have been more taken with had I seen it earlier on in the trip. But having seen more quaint and picturesque stops, I was not too impressed.

Still, the city does have its share of quirky tales and attractions. In the city centre stands a statue of a young boy spitting, thought to be reminiscent of the Manneken Pis statue in Brussels of a young boy urinating into a basin, and it can soak you every few minutes if you are not mindful of where you stand.

Cologne was our last tour stop before we were to disembark at Amsterdam the next day. The fourth- largest city in Germany is perhaps the best known of our stops and likely to be on the radar of most tourists. The city skyline is dominated by the Dom Cathedral, which can be seen from everywhere in the city centre. Its claim to fame: Although Allied bomb strikes during World War II destroyed almost 90 per cent of the city, the cathedral emerged unscathed.

Cologne is also the most cosmopolitan of our stops, giving us the first real shopping streets we had seen in a while. Hohe Strasse and Schildergasse are the city's main shopping streets and they boast mainly luxury goods and department stores.

Our trip came to an end on a Sunday morning. We had breakfast and checked out before disembarking in Amsterdam. No formal tour was provided by the ship or its partners on this day, so our motley crew of journalists and travel agents wandered the streets on our own for a bit - checking out Amsterdam's famous tulip market and cheese shops in the short time we had to ourselves - before hopping on a flight to Frankfurt and then making our own way back home.