A day at the races: Le Mans, the biggest race on earth 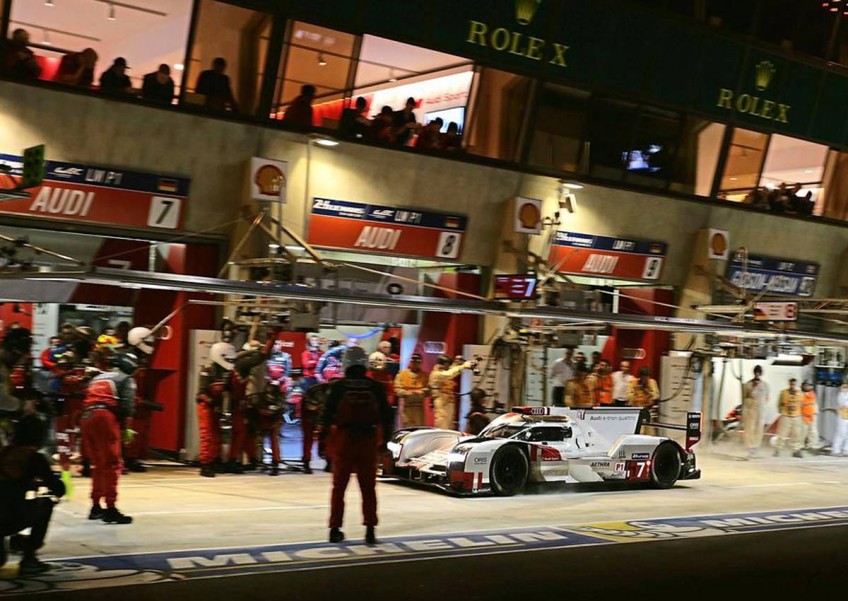 They call it the biggest car race on Earth, and it's hard to argue with that.

The 24 Hours of Le Mans endurance race might not have the global mainstream appeal of Formula One, but to real petrolheads, it is the ultimate pilgrimage.

We could go on and on about the history and romanticism of the race, but the numbers say it all - more than 260,000 motorsports fans descended on the quiet city of Le Mans in France for this year's race in June. To put that in perspective, the population of Le Mans is around 140,000. One can only imagine the love-hate relationship locals must have with the race.

A whopping 55 cars made it to the starting grid, each with three drivers, taking turns over 24 hours of (literally) high octane action to race for one of the most coveted prizes in motorsports.

And so it has been every year since the race first flagged off in 1923, minus a few rough years like, y'know, World War II.

Formula One drivers like Jenson Button, Fernando Alonso, and Daniel Ricciardo have spoken about their desire to race at Le Mans. In fact, double F1 world champion and current McLaren-Honda driver Alonso was reportedly offered a drive this year, only to be denied time off by Honda, according to The New York Times. One F1 driver who did get to race at Le Mans this year was Niko Hulkenberg, and remarkably, he ended up winning it. He called it the "greatest achievement" of his career, and to be fair, it'd probably be the same for any driver in the world who wins at Le Mans.

So what is it about Le Mans that makes it so special?

While the main race itself lasted "only" 24 hours, spectators were treated to an entire week of qualifiers, warm-up races, concerts, autograph sessions, parades, and, of course, plenty of sweet rides on display. Car manufacturers set up temporary luxury lounges throughout the circuit, offering views of the race track, multiple TV screens, some pretty impressive F&B options, and the manufacturers' latest models for all the car geeks to ogle.

We were granted access to the exclusive Audi Racing Arena, which was rather ridiculously well-equipped. It had three different gourmet buffet spreads, a gelato stand, a pizza stand, two coffee bars, two actual bars, a barbershop and a spa. Yes, you heard that right. A spa. (More details in A luxe Le Mans on page 4.)

But more importantly, it gave guests the chance to hang out with the Audi Sport drivers and technical crew ahead of the race.

Audi Sport has dominated Le Mans over the past two decades, winning 11 of the past 16 races.

Two of the team's greatest champions, past and present, were there: Tom Kristensen, the retired nine-time champion they call "Mr Le Mans", and Andre Lotterer, the defending champion who won in three of the last four years.

We spoke to Lotterer the day before the race, and the Belgian-German racer seemed pretty relaxed considering he was about to go into a 24-hour race he and his team had worked on for a year.

"It's a very mythical and historic race," he said. "It's been around for almost 90 years, so it has created a lot of heroes and milestones in the automobile industry and motorsports.

"That's why a lot of brands come here to show their new technology. It's the greatest race in the world, where anything can happen."

Le Mans' race rules and format encourage innovation, which often trickles down to road cars. That's why car lovers love it, and manufacturers see it as the perfect platform to showcase new tech.

Le Mans isn't just about building ridiculously fast cars - the machines competing at Le Mans have to be road-worthy, reliable, durable, and fuel efficient (the less time you spend refuelling over 24 hours, the more laps you make).

There are four categories: two for custom-built prototypes, and another two for grand tourers, which are basically your average sports cars (average as in Ferraris, Audis, Porsches, etc). They all compete at the same time, and prizes are given to the winners of all four categories as well as the outright winner.

(Fun fact: Hollywood actor Patrick Dempsey took part in the race this year, and he actually finished second in his category, one of the grand tourer categories.)

And the cool thing about Le Mans is that it draws people from different walks of life. Some came in caravans (the trailer parks were massive), others came in sports cars. Some watched the race from the grass, others rented helicopters for a bird's-eye view. Some took the train in, others flew in on private jets. There was a constant stream of them flying into and out of the dedicated airfield next to the circuit. But once the race started with a wave of the French tricolour at 3pm, followed by the tradition of three fighter jets painting the sky with a trail of red, white, and blue, everyone was united in excitement.

We followed the race mostly from the balcony of the Audi Racing Lounge and on the giant screens they had set up inside, which really enhanced the whole experience because we were getting live technical info and footage from all around the track. (Being able to stuff ourselves at the buffet at the same time didn't hurt either.)

The night segment of the race was the best. The view of the lit-up track, with the cars zipping by in the crisp night air, was simply spectacular.

We stayed until 1am, and that's when the jet lag kicked in. Audi had 100 shuttle vans on standby for all their guests to get around the enormous race village, so we took one of them back to our hotel - a temporary space set-up in a warehouse just outside the circuit. It was pretty impressive despite being temporary, with hot showers and all.

We rejoined the race around 9am to find Lotterer's car trailing behind Hulkenberg's and Mark Webber's. And yes, that's the same Mark Webber who used to drive for Red Bull in Formula One.

With a few hours left, we moved over to the Audi Racing Club, another exclusive lounge, one with the best seats in town, right on top of the finish line.

Mario Goetze, the Bayern Munich footballer who scored Germany's winning goal at the 2014 World Cup, watched the final few hours there just a few feet away from us.

Even though it was a bit of an anti-climax as Hulkenberg coasted to victory in the final hours, and our new friend Lotterer was stuck back in third, most of the spectators were running on adrenaline by then, so there was still a heady exhilaration in the air.

It was incredibly emotional as the winners took to the podium. Hulkenberg was ecstatic, Lotterer was dejected, Dempsey was crying tears of joy, and the fans were revelling on the tarmac.

It was, after all, the biggest race in the world.