Diabetic patient who cycled 18,000km from Italy to Singapore survives to enjoy her slice of cake 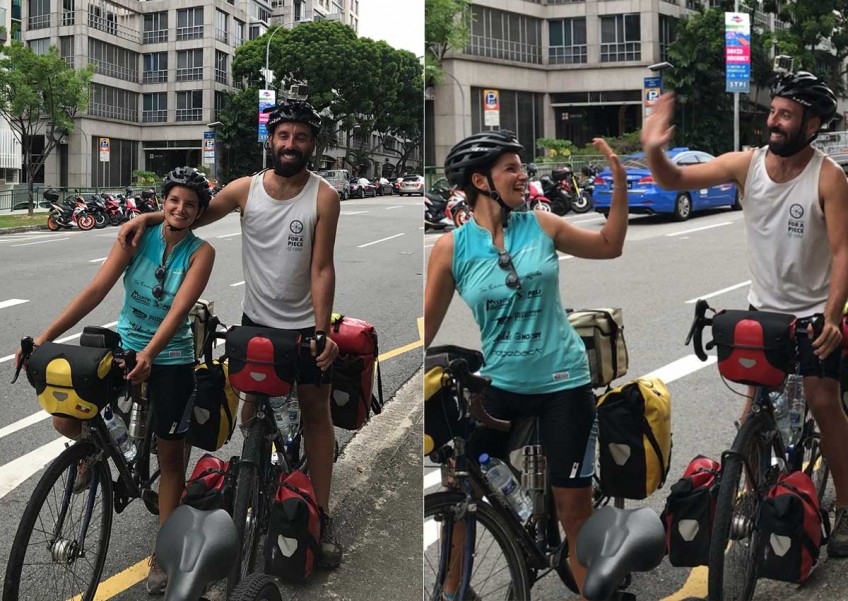 27-year-old Chiara Ricciardi from Italy embarked on a year-long cycling trip with her boyfriend Riccardo Rocchi, 33, last June from Cesena to Singapore. The trip is to raise awareness for diabetes.
AsiaOne

How far would you go for a slice of cake?

Maybe you'd go to a hipster cafe, or for lazy ones like me, to the bakery down the street.

For Chiara Ricciardi and her boyfriend Riccardo Rocchi, they went to great lengths - cycling 17,550km from Italy to Singapore - to savour one of the best cakes here.

Recently, the couple rolled their bikes to a stop at The Patissier along Mohammed Sultan Road, 385 days after setting out from their Italian hometown in Cesena last June.

And you might wonder why go through all that trouble for a slice of cake?

Chiara, who was diagnosed with Type 1 diabetes since she was 11, wanted to raise awareness about the condition. Hence she and photographer beau embarked on a year-long project, "For a Piece of Cake", to make a statement and encourage others with similar conditions.

A slice of cake, which may be a regular indulgence for many of us, can have severe consequences on Chiara's health as her body is unable to produce any insulin by itself. This is unlike Type 2 diabetes, where one's body does not produce enough insulin or does not react effectively to insulin.

But diabetes is not a crippling condition that should stop one from pursuing their dreams, said the spunky 27-year-old.

While neither Chiara nor Riccardo are pro cyclists, they are sports enthusiasts who had previously cycled 1,600km from Trieste in Italy to Patras in Greece. That trip gave them the idea to take a longer journey - this time, half way around the world.

However, it was no piece of cake cycling across continents from Europe and the Middle East to Central Asia and South-east Asia, and they found themselves having to quickly adapt to different situations along the way.

Adapting her therapy along the way

While on the road, Chiara could not monitor her diet as the food options varied widely from place to place, especially in smaller villages. "Most of the time, we had to adapt our diets to the place where we were at, and I had to adapt my therapy to these diets," she said.

To cope with her condition along the way, she ensures that she takes an appropriate amount of insulin before every meal, and keeps a close watch of insulin levels via a tracking device that she wears on her body all the time.

There is almost nothing that she cannot eat, as long as it is in moderation, said the civil engineer, who has a sweet tooth.

Dealing with the unexpected

The couple also had to change their plans at two points during their trip when they were "stuck a little bit", said 34-year-old Riccardo.

The first time was when they decided to pass through Romania, Moldova and Ukraine to get to Georgia, in order to avoid political unrest in Turkey.

The second time, they realised that they could not cycle to Myanmar from India by land due to "disorder" around the land border so they had to take a plane instead.

"With a bus, there is no way we would have stopped in the little villages in the middle of nowhere, but with the bicycle, you have to, and then you always get surprised. And at the end of the journey, we look back and we see that those surprises were the best parts of the journey." - Riccardo Rocchi

Despite the change in plans, they remained unfazed and embraced each as part of their adventure.

Said Riccardo: "The best part of the journey is the unexpected, the unplanned part."

The challenge of storing insulin for the long journey

The weather was also unforgiving, especially when they were in Cambodia and Thailand where temperatures reached a high of 40 deg C, added Chiara. "We had to start cycling very early in the morning to avoid the very hot hours of the day, but apart from that, (we had) no big troubles."

Chiara's insulin supply, which needed to be stored between 2 to 8 degrees Celsius, was kept in special medical transport bags that could remain cool even on the hottest of days.

Despite the challenging weather conditions, the thought of giving up never crossed their minds.

"Sometimes we were stressed about the hot weather, but we were always motivated to go on," Chiara said.

Highlights of the trip

Riccardo added that the highlight of their journey was not visiting the tourist hotspots, but getting up close and personal with the locals.

"We found places that we would have never stopped at if we were travelling by any other transport," he said.

"With a bus, there is no way we would have stopped in the little villages in the middle of nowhere, but with the bicycle, you have to, and then you always get surprised. And at the end of the journey, we look back and we see that those surprises were the best parts of the journey."

Now that they have gotten their cake - The Patissier's signature Passion Fruit Meringue - and eaten it too, the couple are looking forward to the future.

They are considering ways to continue the project, but have yet to come to a firm decision on it, said Chiara.

"The best part of the journey is the unexpected, the unplanned part." - Riccardo Rocchi

If given a choice, the couple agreed unanimously that they would take the 18,000km bike trip all over again.

For Chiara, what's even more important is that fellow diabetics do not let their condition stop them. "With diabetes, it's possible to do anything," she said.

"Just be aware of your condition and do what you like."