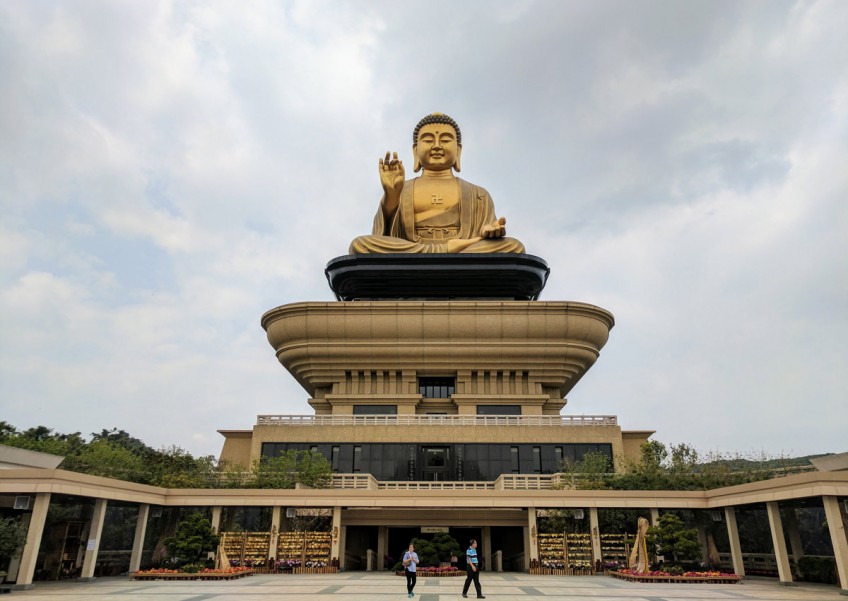 When people visit Taiwan, they mostly go to Taipei.

Many wouldn't know much about Tainan, the oldest city in Taiwan.

But it has some of the country's richest heritage and food culture.

It is the country's largest port and second largest city after Taipei.

If you're feeling adventurous and want to visit a place that not many Indians have been to, add Tainan and Kaohsiung to your to-go destinations list.

Scoot flies three times a week to Kaohsiung and Tainan is just an hour's drive away.

During my five-day trip earlier this month, the weather was cool.

During the day the temperature was a pleasant 22 degrees C but it plunged to about 13 degrees C in the evening.

While language was a barrier since I know very little Chinese, I got by with pointing to what I wanted.

Most restaurants I visited had a couple of dishes on the menu catering to vegetarians.

An important part of the Tainan cultural experience is to visit at least one of the night markets there.

The market is unlike Singapore's pasar malams.

Compared to Singapore, it is more crowded there and you get a chance to immerse yourself in the rich street food culture.

Instead of having dinner at a restaurant, we explored the Da-tong night market and ate our way through the wide array of local street food.

I even tried fried smelly tofu for the first time.

The must try snacks there are the fried potato balls, oyster omelette, braised meat in soya sauce, pork ribs and spring roll with ice cream.

It is better to visit the market in a group so everyone can try more snacks in small amounts and it won't fill you up so quickly.

If you're at the night market and are missing food from Singapore, fret not as I spotted stalls selling roti prata, laksa and kebabs.

This is one place that tourists flock to as it is the second largest department store in Taiwan and it boasts a whole lot of history.

It was founded by Japanese businessman Hayashi Houichi on December 5, 1932 during the Japanese rule, after the first department store in Taiwan, Kikumoto Department Store, opened in Taipei.

The Hayashi Department Store was bombed by the US airplanes at the end of World War II, and while the air raid did not destroy the building, bullet holes are still visible on the rooftop structure today.

There is a lot to buy at this five-storey mall in Tainan - from designer apparel, handicraft, household items to traditional dessert and packaged specialty snacks.

We were pleasantly surprised when we headed to the top floor of the mall where we got a good view of the streets of Tainan.

There is also a Shinto shrine built during the Japanese colonial era on the rooftop.

There are hardly any treehouses in Singapore so if you get a chance, this is a must-visit.

This treehouse in Tainan has a mysterious yet extraordinary air about it.

Over the past 70 years, a huge banyan tree had taken over an old warehouse and thus turned the Anping Tree House into a popular landmark in Tainan.

Now what remains of its architecture is the banyan tree's roots and trunks embedded on the walls of the warehouse.

There is also a suspension bridge above the treehouse which gave us a good view of the tree from the top and also, its surroundings.

The stunning architecture here is a mix of Chinese and Indian.

The main hall consists of Four Noble Truths stupas on the four corners which imitate lofty Indian stupas, while at the same time, stand tall and graceful like the Mahabodhi Temple in Bodh Gaya, Bihar.

In this oasis of peace, the main attraction was the magnificent 108m-tall Fo Guang Shan Big Buddha, which is equivalent to the height of a 36-storey building.

The perfect photo opportunity and a chance for a closer look came when I got up to the Big Buddha Terrace, which is about a 10-minute walk from the entrance of the memorial centre.

The Big Buddha sits cross-legged with his hands in the lotus mudra.

During a guided tour, we were told that the head of the statue alone is three stories tall.

We also went to the Jade Buddha Shrine where the tooth relic is kept.

If you're looking for some fun family activity, visit Lin's pasture in Kaohsiung.

At the farm, we were treated to fresh goat's milk and goat milk pudding as the owner gave us an overview of the farm.

We then took a leisurely walk around the farm to understand how it operates.

We fed the goats in the barn and also observed a milking session.

We were then led to a pineapple farm where I learned to pick my own pineapple.

It required a certain skill, which I picked up quite quickly.

The pineapples there seemed to be juicier and sweeter than the ones sold in Singapore.

The peak season for cultivating pineapples is from March to August and the production is concentrated in Chiayi, Nantou, Tainan, Kaohsiung and Pingtung.

It was my first time in Taiwan and at first, the Indian in me felt that it was an unlikely destination.

But my experiences on the trip have proved me wrong.

I will return to explore other cities in the country.