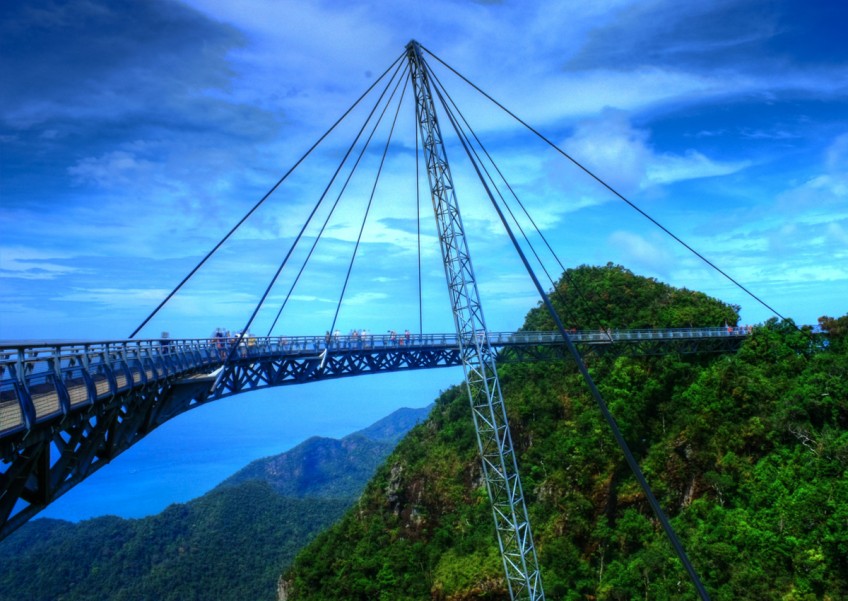 Months of haze got me teary-eyed, literally, for blue skies. I missed breathing in the cool morning air and seeing the sun peeking from between the clouds at the break of day.

So I jumped at the opportunity to visit Langkawi. It ticks all the boxes for me. Beach, check. Breathtaking view, check.

Thanks to this Firely media trip, I found myself back in Langkawi. I have been there before but it was always the basic languid self-drive kind of trip. But the Langkawi Development Authority (Lada), who were co-hosts, had other plans for our group. It set the pace with its eco-tourism theme, and I was shown that beaches were not the only attraction in Langkawi.

We were whisked away to a jetty off Cenang beach. That day, we were to visit a handful of islands out of the 104 in the archipelago. Island-hopping is what they call it, and hop for joy I did.

On a motorboat of 15 people, I was treated to a breezy ride on the waters off the coast. Not the most ideal for those prone to motion sickness, but a few minutes of picture-perfect scenery going past at a "click or you will miss it" speed, and you are bound to forget you are feeling queasy.

You may have heard of Pulau Dayang Bunting, or the Island of the Pregnant Maiden. If you look at it from a distance, you can make out the shape of a woman lying on her back, with a distended belly. Legend has it that bathing in the lake there will make a woman fertile.

On the island, I came across some words of caution. Other than the standard reminders of "No littering" and "Leave nothing but footprints, take nothing but pictures", there was a sign cautioning visitors against feeding monkeys. Some visitors missed it, in their rush to bathe in the magical waters.

What the sign didn't say was that these intelligent creatures can spot your picnic stash from a mile away. Plastic bags filled with snacks are a dead giveaway, and tiny packets of food stuffed into handbags are fair play too. Many a tourist have had plastic bags yanked out of their hands and kids lost their candy to the furry fiends. One of the girls in front of me was attacked from above and her handbag was ransacked for the tiny empty sweet wrapper that was peeking out.

If you survive that ordeal, I assure you a visit there is worth your while. At the sight of the Dayang Bunting lake as I made my descent from a hill, I felt as if I had stumbled upon a hidden treasure. It is impossible not to want to soak your feet in the cool waters.

It could have been sunstroke but I joined a group of people in what I can only term as an "extreme fish spa". Swimming close to the banks of the lake, wild catfish glided over feet and nibbled at those of anyone brave enough to put their feet in the water. I'm embarrassed to say I was squealing throughout.

If feeding monkeys and catfish is not enough, then watching and feeding eagles (as the island is named after) at Singa Besar island may be a highlight. I have never before seen so many of them flocking in one area, and seeing up-close these birds of prey gracefully and precisely swooping in for the kill is a privilege. It feels like trespassing on their turf and catching them in a private moment.

A little unconventional for an island holiday, but I dare say that the trip to the Mardi Agro Technology Park made for some "sweet" memories. You would think, as a local, you have had your fill of native fruits. But you have never had fruits like those at the Mardi fruit farm.

Manager Abdul Kadir Din is proud of, er, the fruits of Mardi's labour. He speaks fondly of the techniques incorporated to grow the best fruits and the care they take to ensure quality.

Going around the fruit farm in the shuttle, I saw that the park is well-kept and organised. My love for fruit smoothies saw me concocting new ideas for them as fruits of all colours zoomed past.

Initially, I thought it would be a flying visit but I was taken to a buffet to sample the fruits in season. These were choice fruits, freshly plucked off the trees. The pineapples are sweeter than any I have eaten and the watermelons, juicy and refreshing. It was a treat on that sunny day.

But Abdul Kadir had more treats in store for us. Whipping out some leaves from nearby fruit trees, he began teaching us how to weave grasshoppers and flowers from them. And from there he led us to several photo opportunities the park had set up - from giant fruits to cempedak with "faces" - to make the visit more memorable.

The thing that caught my eye the most was the urban herb garden that Mardi has cultivated. They are urging city folk to create their own herb gardens. Made out of several pots of different ulam and herbs, the plants form a "vertical" garden that is aesthetically pleasing as well as useful in cooking. It has inspired me to start my own garden; it's cost-effective and convenient for this Masterchef hopeful.

On my flight home, I thought, if on my short trip I managed to see a new side of Langkawi, then what more can I uncover that's hidden in plain sight? Certainly much more is just waiting to be explored.

Firefly flies from Langkawi to Kota Baru every Tuesday, Thurday and Saturday. For more info on schedules, visit www.fireflyz.com.my.