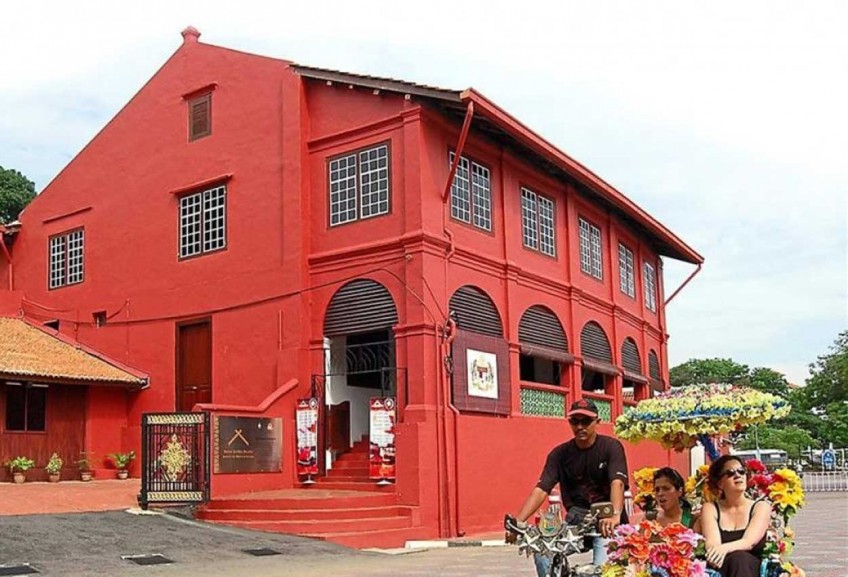 You may been to Malacca many times before, but if you take a walk along the Dutch Heritage trail, you just might find out a few things that you didn't know about the historical city.

According to Dennis De Witt, 49, a management consultant and historian who has authored History Of The Dutch In Malaysia, Melaka From The Top and Historical Tombstones And Graves At St Paul's Hill Malacca, The Malacca Dutch Heritage Trail was an initiative by the Netherlands Embassy in Malaysia. To commemorate the 375th anniversary of the Dutch occupation in Malacca, it was reissued this year.

"The intention of the trail was to help visitors discover the Dutch part of the joint history that Malacca shares with the Netherlands. Many visitors, and even the people in Malacca do not realise that it was the Dutch era that was the longest - for over 160 years - compared to 130 years of Portuguese rule, and 155 years of the British.

"A visitor who goes on this trail will be able to learn that Malacca was made up of two parts during Dutch times - one was enclosed by the fortress and the other was the town area across the river. The fortress served as a means of defence for the main part of the town and its administration, while the town originally served as a place of residence and trade for the different communities living there," he added.

"Visitors will be able to see and learn about old buildings, their European architectural influences, as well as cultural influences in places of worship and homes," said De Witt, who became interested in history after studying about his own Dutch roots and realising there was very little known about the Dutch era in Malaysia. he Porta De Santiago or Old Gateway of the A Famosa was known as Borts Gateway (after one of the Governors) to the Dutch.

When people refer to the old gateway in Malacca as the A Famosa (or Porta de Santiago), they often think of it as a Portuguese gateway. But, look at the top of the gateway, and you will see a crest which was the town's coat-of-arms, and the soldier on the crest carries a shield with the VOC emblem. VOC is a Dutch acronym for Vereenigde Oost-Indische Compagnie or United East Indian Company, which was founded in Holland in 1602 to trade in the Far East. The Dutch name for the gate was Bort's Gateway, named after Governor Balthasar Bort, Malacca's governor from 1665 to 1679. It was also commonly known during Dutch times as the landpoort or land gate because it gave access from the fort towards the land (as opposed to the other gate named zeepoort or sea gate which led to the sea). The Dutch Graveyard is located at the foot of St Paul’s Hill.

If you climb up the steps of St Paul's Hill, to the right at the foot of the hill, you will see an enclosure housing the Dutch Graveyard for VOC officials and their families. It was used by the Dutch from 1670 to 1882, but out of the 38 graves, only five belonged to Dutch people. There are also Dutch tombstones located in St Paul's Church. Having a garrison of 550 Dutchmen and a population of 50,000, the Dutch converted St Paul's Church into a burial ground when the Dutch Reformed Church (now known as Christ Church) was completed. In 1932, the Malacca Historical Society removed the tombstones within the ruins of St Paul's Church and placed them against the interior walls of the church ruins to protect them from exposure to the elements. St Paul's Church was not a Dutch church, and that was not its name during Dutch times. The Dutch Reformists do not name their churches after saints. After the capture of Malacca, the church was converted to a Dutch Reformed Church for the Malacca community, and it was just called the Bovenkerk or Church up the Hill. Because of its strategic position on top of the hill, it was used as an observation point for the fort and its surrounding areas. The Stadthuys is actually the old spelling for Stadhuis, meaning town hall in Dutch. It was built soon after the Dutch first captured Malacca and is said to have been designed after the Old Stadhuis of the Dutch town of Hoorn. However, the Old Stadhuis of Hoorn no longer exists, so the only place in the world to see what it once looked like is in Malacca. The Christ Church was originally known as Church Down the Hill.

Christ Church is now an Anglican church. It was built by the Malacca Dutch community to commemorate the centenary of the Dutch occupation in Malacca, and just known as Benedenkerk or Church down the Hill. The granite bricks that pave the floor of the church did not originate from Malacca but were brought in as ships' ballast and the incised letters on some of them are evidently storage marks. The front doors are decorated with intricate carvings. The doors were taken from the Stadthuys and were most likely from a Dutch ship. The Youth Museum and Art Gallery was once a Dutch administrative building.

Just behind Christ Church is a narrow road that runs parallel to the river and leads to the town square. It has the atmosphere of an enclosure with many traditional shophouses. The most significant building here is the Administration building built in 1784, which became the Malacca Free School in 1826. It was later used as the state General Post Office before being converted into the Youth Museum and Art Gallery. An authentic Dutch era shophouse is located at No. 8 Heeren Street.

Kampung Belanda (or Dutch Village) is made up of Heeren Street and Jonker Street. This is where the old Dutch community used to reside. Their homes were eventually taken over by the rich Peranakans of Malacca. On Heerenstraat or Heeren Street, which means First Class Gentleman Street in Dutch, some of the magnificent homes have been converted into hotels or private museums. A grant has been awarded to carry out restoration of a Dutch era shophouse located at No.8 Heeren Street. The Bistro Year 1673 is housed in the former Dutch tax office.

Parallel to Heeren Street is Jonkerstraat or Jonker Street, which means Nobleman Street in Dutch. The traders and merchants' townhouses were located here. The materials used for the main entrance steps and passage thresholds leading to the air wells of these homes indicate the owners' social standing. Housed in this two-storey 1673 Dutch heritage building is the Bistro Year 1673, a popular restaurant. The old building was the former boomkantoor or tax office for the VOC where the havengelden or taxes were collected. The building structure, doors and windows were cast from 17th century metal. The Middleburg Bastion was built by the Dutch in the 1660s to protect the old quay at the Melaka River.

Many who have passed by the Malacca River mouth where the roads meet in front of St Paul's Hill are unaware that here is where the magnificent old city once lay, 1.2m below the new one. The fort wall ruins and Middleburg Bastion were discovered in 2006. The 1.5km fortress wall that encircled the city was built by the Portuguese in the mid 1500s. The Dutch added the Middleburg Bastion and Henrick Bastion in the 1660s to protect the old quay.

Built in the 1700s, the Architecture Museum (see top image) is typical of Dutch architecture and design, with its thick walls, symmetrical floor plans, upright staircase on the upper floors, large windows and protruding beams. It was the official residence of senior VOC staff. In the early 1960s, it became the Malacca State Library and was packed with students. Today, items related to the architectural history in Malaysia are housed here. The Museum and Antiquities Department has the typical Dutch structure.

Also built around the same period, the Museum and Antiquities Department possesses the same typical Dutch architecture and design. It was also occupied by senior VOC staff. The Stamp Museum was the first museum in the state.

Located along the same row is the Stamp Museum. For 300 years, until 1930, it was occupied by the Westerhout family, and after 1957, it was converted into the state's first museum.