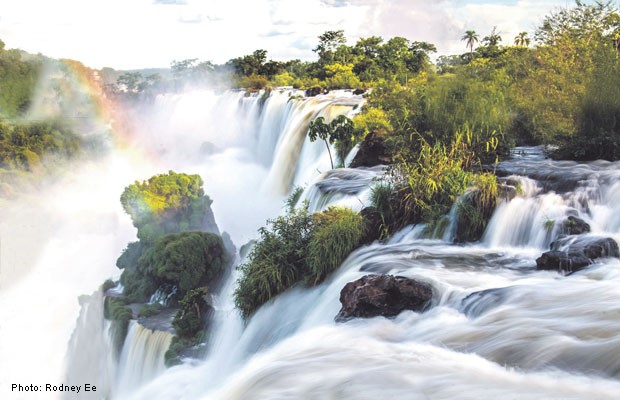 At the border between Argentina and Brazil, we stared down the Devil's Throat.

There was no fire or hot molten lava, but instead, millions of litres of rushing water plunging into a U-shaped chasm every second, with an incredible plume of mist and spray as high as a 150m above it.

Nicknamed the "Devil's Throat", or Garganta del Diablo in Spanish, this U-shaped chasm is where half of the flow of the mighty Iguazú River tumbles - with metal catwalks on both Argentinian and Brazilian sides of the falls allowing visitors to get up close to witness the violent force of the water as it tumbles down from the Parana plateau.

The rest of the water plunges down at other points of the plateau, and depending on the season, there are between 150 to 300 waterfalls, which collectively make up the mighty Iguazú Falls, one of the seven natural wonders of the world.

Most of these waterfalls are on the Argentinian side of the falls, and are reached through two walking circuits - the lower circuit, Circuito Inferior, and the upper circuit above the falls, the Circuito Superior.

In addition, there is a third circuit on Isla San Martin, an island along the river, which can be accessed when the river levels are deemed safe to land.

We headed for the Devil's Throat first, as we had read that it was the most spectacular part of the falls. To get there, we hopped on the Ecological Jungle Train.

The train chugged along at a snail's pace through the forest within the park, and got to the start of the short trail that led us to the Devil's Throat.

As we stood at the catwalk that looked down at the chasm, we were awed by the spectacle.

Upstream, the river looked deceptively calm, but at the edge of the plateau, it vanished with a roar into the pool of swirling mist and spray below.

Onwards to the Circuito Superior, we stopped frequently at various viewpoints to take photos of the waterfalls and rainbows below us.

This circuit took us through the rainforest, and includes a panoramic view of the Mbigua, San Martin and Escondido Falls.

The next morning, we were up early, looking forward to the catwalk that leads right up to the edge of the Bossetti Falls via the lower circuit.

With swimwear under our T-shirts and shorts, we did not mind getting drenched from head to toe from the horizontal spray coming from the falls as we stood beside it. Given the intense summer heat, it was a welcome reprieve.

To add to the fun, we boarded a speedboat at the river's edge, which took us upstream to within sight of the Devil's Throat, then turned back and headed towards the falls around the Isla San Martin.

With our life jackets securely fastened, we felt the full fury of the falls as the whole boat went completely under the curtain of water, came out for a breather, then went under again.

It was as if we were taking a ride in a water theme park, and all around the boat everyone had big smiles or were giggling away like kids.

After returning to the hotel for a "proper" shower, we made our way across the border into the Brazilian part of Iguazú National Park.

Here, there were more panoramic vistas from an observation tower next to the Floriano Falls, as well as more wildlife, including colourful birds, iguanas and a small family of coatis - animals of the raccoon family that are indigenous to South America.

From here, one could also take helicopter flights over the falls, with tours to the massive Itaipu Dam and the rainforests.

We have been to many waterfalls around the world and been awed by nature's grand design, but none more than the mighty Iguazú.

The best gateways to South America from Singapore are Sao Paolo and Buenos Aires.

Good connections can be made on Lufthansa, Air France, British Airways and Turkish Airlines. We flew into Cataras del Iguazú Airport on the Argentinian side, and left via Sao Paolo after three days and two nights.

From Buenos Aires, there are around 10 daily flights to Cataras del Iguazú Airport operated by Aerolineas Argentinas, and LAN Argentina.

■ There are only two hotels in Iguazú National Park - the Sheraton Iguazú on the Argentinian side, and the Hotel das Cataratas on the Brazilian side.

■ Singaporeans do not require a visa to enter Argentina or Brazil.

■ Don't feed the animals in the park, especially the coatis, which can become aggressive and have been known to bite people.

This article was published by the Special Projects Unit, Marketing Division, SPH.

This article was first published on October 28, 2014.
Get a copy of The Straits Times or go to straitstimes.com for more stories.