Going off the beaten path with a trusty jeep 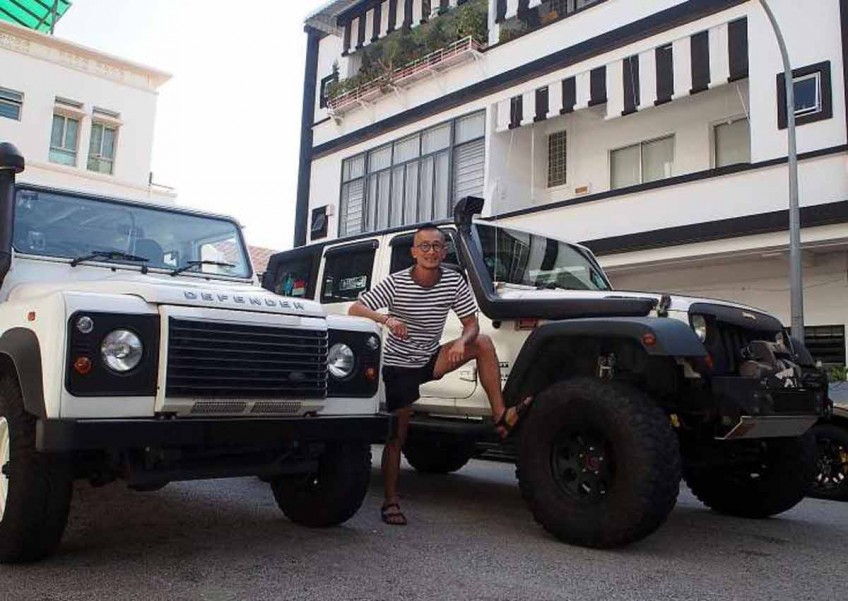 His Jeep Wrangler Unlimited Sport sees off-road action in the jungles of Malaysia, where he tackles muddy gullies and river crossings regularly.

The 42-year-old managing director of an engineering company loves 4x4s so much that his daily ride to work is a 2015 Land Rover Defender 110 - not quite your regular automotive fare. It is also one of the last iconic-shaped Land Rovers to be registered here, which makes it even more special.

The British off-roader, however, does not venture much off tarmac. In its cavernous boot is a permanently stowed mountain bike.

When Mr Oh gets the itch to ride off-road in Mandai or Bukit Timah, he drives the long-wheel-base Defender to the starting point. He keeps his riding gear in the off-white 4x4, along with a bicycle pump, work boots and a power drill he sometimes needs for work.

His 2009 Jeep Wrangler, on the other hand, is equipped with serious off-road tyres and a 9,000lb winch, which comes in handy often. He uses it to recover his buddies' Jeeps if they are stuck deep in mud or when he needs to be bailed out.

Other functional modifications include a snorkel for river-crossing and a 4½-inch suspension lift kit for better obstacle clearance. He also has an Air Locker kit, a device to lock the differentials to overcome the challenging terrain of Sungei Mas in Kota Tinggi.

The 3,800cc Wrangler doubles as the family's weekend ride. Mr Oh's wife does not share his passion for anything off the beaten path, but his 16-year-old son does and has accompanied Mr Oh on many 4x4 trips.

"There is nothing like finally reaching our destination by the banks of a river deep in the jungle and setting up camp for the night," Mr Oh says.

"One of our kakis (Singlish for friends) is a chef and he whips up a delicious dinner. Another buddy brings beer kept ice-cold in a portable refrigerator. We dine and chat under the starry sky to the backdrop of insect calls."

He has spotted elephant dung in the jungle on a few occasions, but has not encountered any of the wild giants.

When he is not driving off-road in Malaysia, mountain biking in Mandai or trail running in MacRitchie, Mr Oh runs ultra-marathons.

His badge of honour includes the Monster Ultra 200 in 2014. He ran the 200km round-island route in 38 hours. His Jeep buddies took turns driving their 4x4s to keep him company and one even cycled alongside him the whole time.

Earlier this year, he finished a 100km race in Hong Kong with a cumulative elevation gain of 4,800m in the mountainous region of Lantau Island. He trained by running up the 164m-high Bukit Timah Hill - a molehill compared with the race location.

The training had to be intensified with staircase-running in high-rise buildings.

When asked which of his two 4x4s he loves more, he says: "It is like asking someone which of their two children they love more."

The writer is a contributor to Torque, a motoring monthly published by SPH Magazines.

This article was first published on July 16, 2016.
Get a copy of The Straits Times or go to straitstimes.com for more stories.