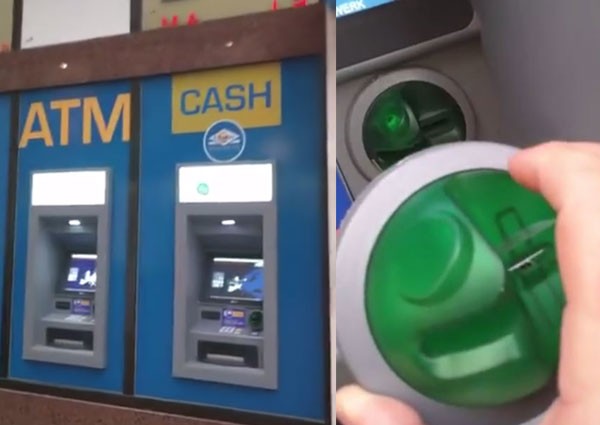 Using the ATM when you're in a foreign country is sometimes a necessary evil, especially when you've run out of cash.

We've heard stories about how ATM card skimming is one typical racket that is commonplace in Europe.

One tourist confirmed our fears when he discovered a dodgy ATM in the Austrian city of Vienna.

But unlike the stories which warn you to beware of ATMs in quiet places, the compromised machine was located right in downtown Vienna, next to several hotels.

In a video recording posted on Facebook, the man says he noticed 'a bit of glue' on the card receiver, which roused his suspicions.

He gives the plastic device a tug and actually manages to pull it off. Speaking off-camera, he says: "This is very well made, you can see it's an exact replica [of the card receiver]."

A skimming device captures the details in a credit card, allowing fraudulent charges to be made using the information.

The man then notices a woman at the next machine about to key in her pin number and dives in to stop her. However, a check of the ATM reveals nothing out of the ordinary.

In the voice-over, the tourist reveals that he works with a cyber security company, and says "it pays to be paranoid".

"In Europe, always check for ATM skimmers, before putting in your credit card".

See also: 5 tourist scams you should watch out for in Europe

Facebook user Jake Gibson left a comment on the video, confirming that tourists should always be vigilant. He shared another horror story: "I went on a month long trip to Europe last summer and two of the people I was travelling with had their information stolen from ATMs such as these.

"Their checking accounts had been entirely depleted and they had no money to spend for a couple of days.

"Make sure you are careful and use cash if possible (although I know how some people feel about carrying large amounts of money)."

However, credit card fraud has also been reported in Asia. This just means that it pays to be careful when it comes to your personal safety and security, no matter where you are.