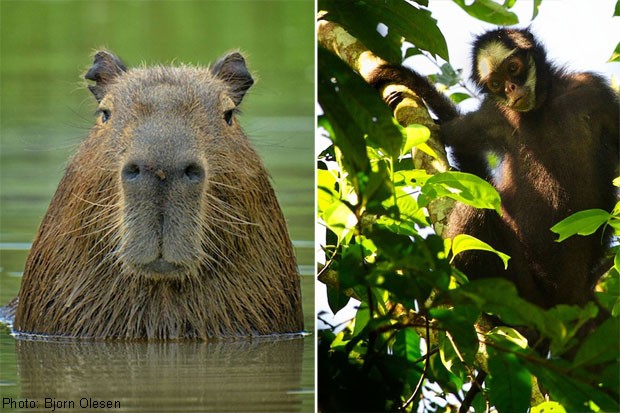 BRAZIL - Observing jaguars in the wild has been on our wish-list for many years.

During our previous visits to Ecuador and Peru, we had failed to see the magnificent cat, the third largest after the tiger and the lion. So, in September, we journeyed into the remote jungles of Brazil in search of this spotted feline once again - a trip which yielded close encounters with a whole host of other wonderful wildlife.

Our adventure started 250km north of Sao Paulo in Itatiaia, Brazil's first National Park. The Mantiqueira mountain range, 300m above sea level, afforded all- embracing panoramic views of the pristine Atlantic rainforest. It is priceless to wake up to clean, fresh mountain air, listening to the calls of toucans and whirring wings of hummingbirds.

From Itatiaia, we descended to Ubatuba, a magnificent coastal area between Sao Paulo and Rio de Janeiro. It is one of the few habitats where the Atlantic rainforest covers the land from the mountaintops right down to the sea, with an overwhelming variety of birds. It is also the surf capital of Brazil. With more than 100 beaches, it is a conducive breeding ground for beach bums - all you need is a pair of Havaianas flip-flops, swimwear optional.

There, we enjoyed churrascaria - which is Portuguese for barbecue - a rotisserie of beef, pork, chicken and sausage with pineapple, all charcoal-grilled to perfection in an open oven. Some restaurants have waiters coming to your table with a skewer of chunky meat to offer you the cut you want. Others operate a buffet that charges for food by the weight consumed, be it meat or vegetables.

From the Atlantic rainforests, we flew north-west to sleepy Cuiaba, state capital of Mato Grosso and the gateway to Pantanal, wetland and aquatic heart of South America.

From Cuiaba, we drove two hours on a dusty undulating gravel road, in punishing 42 deg C heat. Passing through dried-out farmland, we finally arrived at the natural lagoon in Nobres, an oasis with crystal clear, icy blue water formed from subterranean sources near Rio Salobra. Following the current, we snorkelled and floated down the river for a few kilometres, enjoying the cool unpolluted water, surrounded by huge freshwater fish and stingrays that you can reach out and touch.

Pantanal is the world's largest freshwater wetland and an Unesco World Heritage Site. In the rainy season, this grand wetland floods up to waist-deep with water. But in the dry season from July to September, it offers a spectacular concentration of wildlife, transforming it into a wildlife watcher's paradise.

On the Transpantaneira highway through the Pantanal, there are many fazendas or ranch-houses offering B&B with comfortable air-conditioned rooms and home cooking. Meals are all buffet-style with generous servings of farm-fresh beef or chicken, chunky root vegetables, and the essential rice and beans. We usually finished off our meals with fried bananas or a yummy mini cheese bun. Then relax with a good cup of thick and aromatic Brazilian coffee or a glass of Cachaca, a native liquor distilled from sugar cane.

It took eight hours to cross 122 wooden bridges connecting the 150km Transpantaneira highway with the Cuiaba River. On the way, we photographed owls, roseate spoonbills, storks and marsh deer, and saw hundreds of caimans sunbathing, while vultures circling above scavenge for carcasses or perhaps an exhausted tourist.

Many capybaras families were enjoying their mid- afternoon mud spa alongside their main predator, the caiman, while the Jacani storks nursed their newborn chicks in treetop nests. We saw a hairy, shy armadillo searching for juicy ants in the bush.

Our houseboat was anchored upstream of the Cuiaba River and, at 5.30 every morning, we took our small boat to check out the wildlife scenes. Our first actor was a large male jaguar nicknamed Mick Jaguar. It was about 1.6m long from nose to tail, and stood at about 70cm tall. It had a bad eye sustained from a bullet wound - according to our guide, a rancher had shot it after it ventured into his cattle ranch and killed a newborn calf.

The name Jaguar is derived from the native American word yaguar, which means "he who kills with one leap".

This apex predator stalks and ambushes its prey skilfully. It can swim fast without any splashes and dash like lightning. Its powerful jaws and canine teeth can bite and suffocate any animal, or pierce through their skull instantly. Not surprisingly, Pantanal has the highest concentration of jaguars in the world, as the animal's diet comprises more than 80 species of animals including birds, monkeys, fish, turtles, caimans, deer, capybaras and tapirs.

We followed Mick quietly on our boat for 20 minutes, probably not more than 15m from the bank, to observe it feeding on freshly caught deer.

A few weeks later, the same jaguar appeared in a National Geographic video, fighting a caiman crocodile. It is a small world for wildlife photographers.

We spotted an astonishing six different jaguars within a week and we even saw one sneaking up on a capybara - without success. We were amazed to discover how big (weighing up to 160kg) and what great swimmers they were. And they seemed to enjoy a good bath too. Watching them closely, from the safety of a boat, was a hypnotising experience and one we will never forget.

Another favourite moment was having breakfast with the endangered giant giver otter, the largest otter in the world that grows up to 1.7m, with only about 1,000 left in the world. Once they were heavily hunted for their soft fur, but in Pantanal, their population is slowly recovering, making them easier to spot.

We followed three families on three consecutive mornings, observing these apex predators fishing and sharing akari catfish, communicating with their young and vocalising their pleasure. Their dens are mud holes a few meters above the riverbanks with multiple entrances, and the same family group have a few different dens strategically located, suitable for both dry and wet seasons.

One evening, we saw an otter mum bring her month-old pup out to experience the real world for the first time; they were surrounded by excited, playful and cooperative uncles and aunties taking turns to hold the cub in their mouth. Soon, the ceremony was over, and one by one the nine family members retreated into the seemingly small entrance to the den, some having difficulties climbing up the slippery mud bank (too much fatty fish?). The last male made a full surveillance of the surroundings before calling it a day.

Slowly, we made our way back to the houseboat looking forward to grilling the freshly caught 5kg catfish for dinner. In the intoxicating golden sunset, flocks of magnificent hyacinth macaw squawked nosily and showed off their colourful plumages. It is one of the most beautiful birds among the 450 bird species in the Pantanal. Sadly, these deep blue, large-headed and heavily beaked birds are the most sought-after trophy pets in the world.

As we cruised serenely on the tranquil tributary, a huge black shadow suddenly flashed on the riverbank. A secretive South American Tapir was having his happy hour drink in front of us. Typically solitary and nocturnal or crepuscular (active during dawn and dusk), it likes to forage in the dark.

It is the biggest mammal in South America with a 250kg body, but it is as agile as a ballerina, tiptoeing effortlessly up the steep and slippery riverbank.

Our final stop was in the heart of the Amazon rainforest. We stayed at the Cristalino Jungle Lodge nestled in the middle of a 12,000ha private reserve offering wildlife observation towers, boating, trekking, swimming, an endless number of amphibians, insects and rare plants.

It was the nesting season of the rare Harpy Eagle and our bungalow was only three minutes away from its nest on a 30m-tall Kapok tree. Together with the Philippine Eagle, the harpy eagle is considered the biggest and most powerful raptor in the world, feeding mostly on monkeys and sloths, which are plentiful in this area.

Entertained by hundreds of different insect species, including a couple of fierce-looking tarantulas, during our night walks, we shone our headlamps to investigate tree barks, nests and webs. One night, our lights attracted a wasp, which ensnared itself in a strange- looking web. Within seconds, a hairy spider crawled out to snatch and subdue his prey, cocooning it skilfully.

Brazil has more than 70,000 species of insects and more are being discovered every week. Would it not be wonderful to discover a mean thing like this and name it after your enemy?

After a month - and a return journey to Sao Paulo that took 14 hours by boat, four-wheel-drive and two no-frills domestic flights - we bade farewell to the Brazilian wilderness.

Singapore Airlines flies directly to Sao Paulo three times a week, with a brief stopover in Barcelona. From Sao Paulo there are direct flights to most destinations within Brazil.

When to go: The best months for wildlife watching are from August to October; try to avoid the main holiday periods from mid-December to the end of February as well as the month of July.

Where to book: For visits to the Pantanal area, Pantanal Nature Wildlife Tours (www.pantanalnature.com.br) can organise individual or group itineraries.

For visits to the Amazon rainforest, go to www.cristalinolodge.com.br/ for help with travel arrangements, as well as booking of domestic flights.