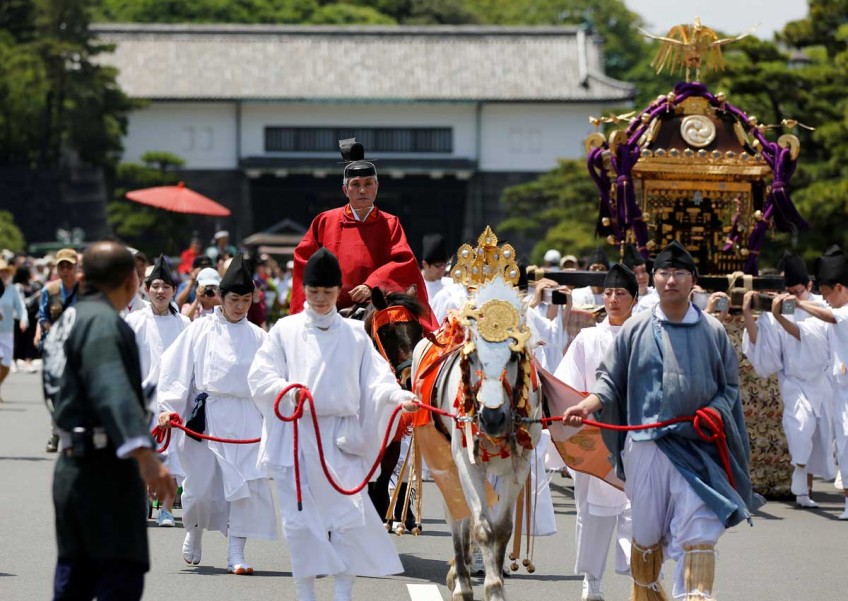 Participants dressed in ancient Japanese costumes take part in a parade at the Imperial Palace during the Sanno Festival in Tokyo, Japan June 10, 2016.
Reuters

The Imperial Palace in Tokyo can now be visited without reservations, as more facilities related to the Imperial family, including the Kyoto Imperial Palace, are being opened to the public and made easier to access starting in this fiscal year.

The opening up of Imperial facilities is partly aimed at attracting foreign tourists, the number of which is expected to further increase ahead of the 2020 Tokyo Olympic and Paralympic Games.

Responses from foreign tourists were highly favourable. One said, "I can deeply feel Japanese culture."

Although it was cloudy around the Imperial Palace on Saturday, about 30 members of the public formed a line in front of the palace's Kikyomon gate early in the morning to register as visitors on the day.

Saturday morning, a total of 245 people participated in tours inside the palace grounds, including those who had made reservations. Of them, 140 were foreign tourists.

Accompanied by guides, the visitors took a walking tour in which they saw such things as the former Privy Council building, Fujimi-yagura (Mt. Fuji-view Keep) and the palace building beginning at 10 a.m. During the approximately hour-long tour, they took photos.

A 25-year-old university student from Uruguay came to Tokyo as a tourist and heard in a hotel that registration of visitors to the palace on the day would begin Saturday, and took part in the tour.

The student said: "I was surprised to see the palace is full of greenery though it is in central Tokyo. It's good that with a simple procedure, we can have experiences of deeply and closely feeling core parts of Japanese culture."

The government has set a strategy of attracting more tourists from overseas as an economic stimulus measure. To this end, the Imperial Household Agency decided to open more Imperial facilities to the public.

Visits to historic Imperial facilities in Kyoto, including the Sento Imperial Palace, Katsura Imperial Villa and Shugakuin Imperial Villa, with same-day registration will become available by the end of this fiscal year.

Currently, visitors must make reservations and be accompanied by guides for visits to the Kyoto Imperial Palace. These regulations will be also changed so visitors will be able to freely enter and leave anytime the facility is open.

Mainly for sanitary reasons, Goryo Bokujo (Imperial Stock Farm) in Tochigi Prefecture, and two Kamoba (Imperial Wild Duck Preserves) in Chiba and Saitama prefectures, which are managed by the agency, have been closed to the public in principle. But the government has decided to also hold tours for the public at these facilities.

Foreign tourists have become increasingly interested in facilities related to the Imperial family year by year.

According to the agency, since the start of the Heisei era (1989-), the number of visitors to the Imperial Palace has been between about 30,000 and 80,000 a year. But about 10 years ago, the percentage of foreign visitors among all visitors to the palace began rapidly increasing.

In recent years, foreign tourists who were apparently disappointed could often be seen around the Imperial Palace. They wanted to tour the main facilities in the Imperial Palace, but police officers of the Imperial Guard stationed near the gates explained to them that they had to make reservations.

An official of JTB Corp., a travel agency company based in Shinagawa Ward, Tokyo, said: "In Britain and other countries, royal facilities are popular tourist spots. If the opening of the Imperial facilities progresses, tourists from overseas will be glad."

The company is enthusiastic about the possibility of increased sales of travel service products for foreign tourists in line with the move.

The agency is developing application software for smartphones that will provide foreign tourists with information about the Imperial Palace and the Kyoto Imperial Palace in English, French, Spanish, Chinese and Korean.

At other Imperial facilities, the agency aims to prepare audio guidance devices in other languages besides English for foreign tourists.

Prof. Chieko Chiba of Shukutoku University, who is also a tourism journalist, said, "Foreign tourists regard the Imperial family as a symbol of Japan's mystique and so feel more attracted than Japanese assume."

She praised the opening up of Imperial facilities, saying that doing so will promote tourism in Japan.

However, the Imperial Palace is a place where important ceremonies and rituals are held, and it also where the Emperor and Empress reside. And all Imperial facilities in Kyoto, including the Kyoto Imperial Palace, are precious historical buildings. Therefore, it is necessary to make preparations to accept more visitors.

Shinichiro Yamamoto, deputy director of the agency, said: "We hope visitors will enjoy seeing the facilities that have long and deep ties with the nation's history, tradition and culture, and will be encouraged to deepen their understanding about the Imperial family's activities. On the other hand, it's important to take measures to preserve the environment and ensure security. We will address these points very carefully."