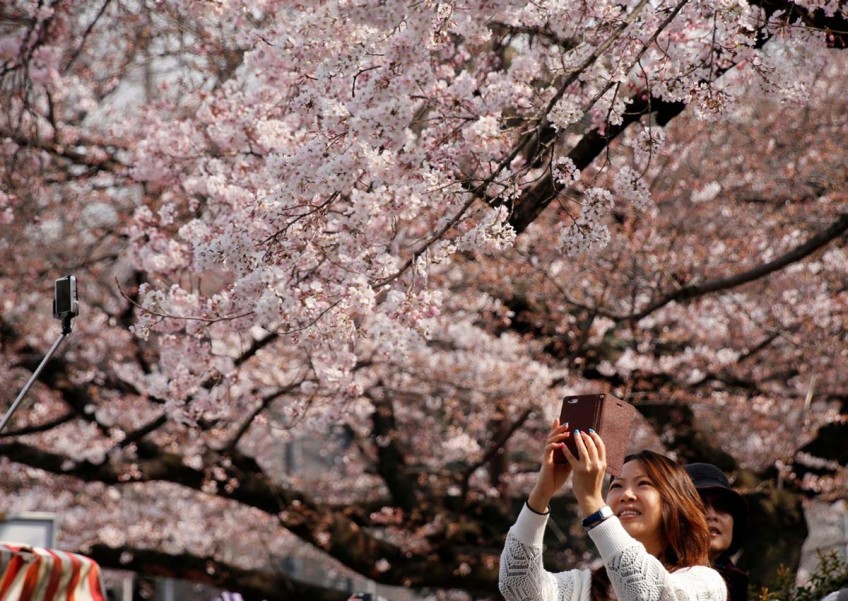 A woman takes a picture of blooming cherry blossoms at a park in Tokyo, Japan March 30, 2017.
Reuters

MITO - Japan's cherry blossom season kicks off boozy parties across the country and draws tourists from far and wide, but the annual coming-of-spring ritual isn't official until inspectors like Hisato Nishii sign off on it.

Over the past few weeks, local weather offices have been sending civil servants like Nishii out to so-called barometer trees that signal when sakura - cherry blossom in Japanese - have bloomed.

It's no small matter. Millions of Japanese celebrate the explosion of white and pink flowers heralding the change of season, with the Tokyo area expected to hit full bloom this week.

Parks are full, restaurants are packed, and companies get in on the action with sakura-branded merchandise, from pink beer cans to flower-motif candy.

The festivities come at a time when Japan kicks off a new business year, many university graduates start their first full-time jobs, and older colleagues shift into new positions.

The very short season - full blooms only last about a week before the petals start falling off trees - has long been cast as a symbol of the fragility of life in Japanese art and literature.

"Sakura have soaked into Japanese people's minds because they come at a time when many are starting a new chapter in their life," Nishii said, as he inspected a barometer tree in Mito city, about 100 kilometres north-east of Tokyo.

"They capture people's hearts because they bloom only for a short period of time."

'WE DRINK BECAUSE IT'S SPRING'

Blooms in a particular area - they start as early as March in southern Kyushu and as late as May in northern-most Hokkaido - are official when a half dozen or more flowers blossom on a barometer tree.

Inspectors initially come once a day, but once the buds start swelling up, the visits increase to twice daily, Nishii said.

The location of a sample tree is a tightly guarded secret to prevent pranks."We carefully observe them so as not to miss any open buds and once we confirm it, we officially announce the blossom season's start," he said.

The Japan Meteorological Agency has been monitoring cherry blossoms since 1953, but timing the blooms is still far from an exact science.

A big rainfall can wash out the delicate flowers while a cold weather snap sometimes delays their appearance.

It's a nail-biting experience for some, including many tourists who book travel around the expected times for a full bloom when trees are covered in a blanket of flowers.

Read also: Planning on seeing sakura in Japan? Here's when it'll blossom in 2017

Parks in Tokyo have already been filling up as friends, families and colleagues stake out choice spots, laying plastic tarps on the grass as they start hours-long parties under the pretty-in-pink trees.

Yusuke Kinoshita was one of thousands of locals and tourists who gathered in Ueno Park, one of the capital's most popular sakura viewing spots, even before the blooms started."I've been drinking since 10 this morning," the 39-year-old hotel worker said one recent weekday afternoon after his shift, noting that his boss would be joining the boozy party later on.

Read also: When and where to see cherry blossoms in Korea