Journey into the glacier 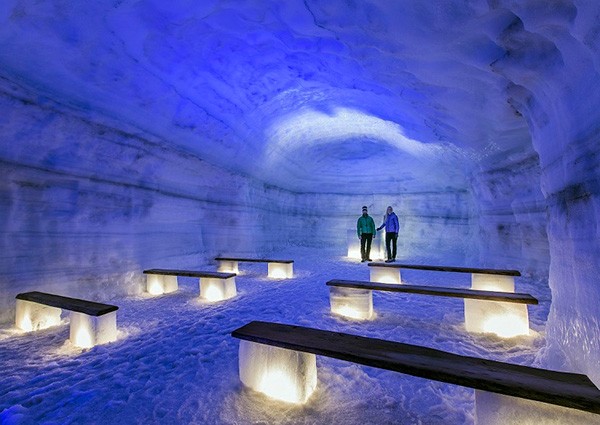 Halfway up Langjokull glacier in Iceland, things get a bit hairy.

Snow has been falling all day on the glacier and the glacier surface is covered in a fresh layer of powder. Visibility is fast dropping, as the world is whited out.

The driver of the Mercedes-Benz van we are in keeps getting out to deflate the tyres to improve its grip on the slippery snow, but it is obvious we are moving painfully slow - one step forward, two steps back.

Some in our party are in a separate SUV. They stare at us, van-riders, from their windows, pointing at our jerky "progress". Then they start - literally, mockingly - driving circles around us.

By now, a couple of us are beginning to look a little green around the gills. Each rapid slide backwards is accompanied by massive head-banging as our driver, of strong Viking stock and unflappable, stomps on the brakes, as the vehicle loses its fight with gravity and starts down the incline again. The van then lurches forward, along with our stomachs. Stop. Start. Stop. Start.

What will people do for a good drink? A lot, apparently.

We are on our way to the world's first man-made ice-cap glacier cave, nestled deep within Langjokull glacier, about 140km north- east of Reykjavik, in order to set up a pop-up bar.

In attendance, too, are journalists from the United States, Britain, Malaysia and Singapore. But the multinational wisecracking has now acquired a kind of nervous edge.

Fortunately, an eight-wheel Ice Explorer - a Nato-built vehicle modified for navigating glaciers - passes us. We follow in the tracks it makes, travelling easier up the ice on compacted snow.

In less than 20 minutes, we are up the glacier's west face, at the entrance to a tunnel hollowed out of the glacier: a 400m-long circuit that lies 30m under the surface of the glacier and goes 200m sideways into its heart.

With snow swirling around us, we pull on crampons - essentially rubber lattices covered in studs that fit over the soles of your shoes - to improve our grip on ice and avoid slipping inside the tunnel. Once kitted out properly, we stuff our numb fingers into gloves and head into the mouth of the tunnel, into 0 deg C air.

Leaving daylight behind, we trudge through slush, deeper and deeper into the glacier. Fairy lights are strung along the sides, providing us with faint illumination.

"These Christmas lights are temporary," says our guide. "There'll be proper lighting once the tunnels are completed."

Work began on the ice cave and its tunnel in 2013 and they opened officially on June 5 (we are visiting a month before, in May).

Langjokull, or "Long Glacier" in Icelandic, with an area of about 950 sq km, is the second largest in Iceland after Vatnajokull and one of the biggest in Europe. Much of it sits more than 1,200m above sea level.

The whole tourist attraction is the brainchild of two Icelanders, Baldvin Einarsson and Hallgrimur Orn Arngrimsson, who wanted to take people into the glacier ice cap to see the blue ice buried deep beneath the surface.

When snow on the glacier is compressed, air bubbles are squeezed out and the ice crystals enlarge, thus giving the ice its blue hue.

Wearing weatherproof parkas, boots, gloves, hats and scarfs, we feel our way along the walls, avoiding the frigid puddles of water in the centre of the path. The tunnel is 3m wide and there is enough head room that one does not feel claustrophobic.

Along the way, exhibits such as ice tools and wall text are embedded in the tunnel walls for those inclined to examine them. At various points of the hike, our guide points out the faint aquamarine and deep black crevasses in the ice.

I pepper the guide with questions about the ice excavation process and safety precautions.

How much equipment was needed to carve this thing out? Short answer: Two huge digging machines. How old is the ice here? Thirty to 40 years old - young, compared with other parts of the glacier.

What needs to be done in terms of maintenance? The ice in the tunnel will grow by a few centimetres in thickness a year - but by as much as 50cm a year in the ice cave that has been dubbed "the cathedral", a chapel-like space that can be hired as a wedding venue. This extra ice will need to be shaved back periodically.

The operating company's website, intotheglacier.is, states that it has "taken expert advice from a top international engineering and consultancy business headquartered in Iceland" and retains the services of a "leading geo-physicist".

There is no age restriction to visit the ice cave, but one must be fit enough to walk 500m on snow and ice, and stand for about an hour.

After about half an hour of walking, we turn into the "cathedral". Six wooden benches are held up by translucent ice blocks, lit from within by white spotlights. An "altar" sits in front - a plain square counter also of ice - but there are no religious insignia around, just the cruel, freezing beauty of nature; the strata lines of time on the ice walls and ceiling.

We sink gratefully onto the "pews", resting our legs and tucking into gourmet bento lunches.

Mr Petch and his team lose no time in setting up his "bar" on the altar block, chopping mint, slicing limes and unboxing glasses.

The cameras click as booze- hound journalists document him at work, pouring from clear bottles of Reyka Vodka. The cocktails are handed around and the liquid goes down like smooth fire in our throats. "Skal!" we say, Icelandic for "cheers", as we raise our glasses. Cameras click again - this time for a slightly tipsy group picture.

I feel a little frost-bitten, but there is something to be said for drinking cleanly distilled spirits in such a surreal environment. After all, the vodka depends on Iceland's abundance of pure arctic spring water, melted from glaciers such as Langjokull, to maintain its small-batch quality.

Then it is time to complete the ice tunnel circuit, head back into daylight and make our way down the glacier by van. The expedition will end at Reyka's distillery, in the town of Borgarnes, on the way back to Reykjavik.

There, we will gawk at the custom-made copper Carter-Head still, one of just six in the world, used by master distiller Thordhur Sigurdsson to distil the vodka, which is then filtered through porous lava rocks.

After the slightly alarming beauty of the glacier, the distillery will seem as safe as a house. In fact, we will be rather surprised to find it is not much bigger than a house, its entrance marked by a cartoon orange cottage.

But before all that, the ride down is even bumpier than the ride up, if that is possible. When Mr Fjalar Sigurdarson, the Icelandic consultant accompanying us on the expedition, suggests we all fasten our seatbelts, nobody argues.

I thank my lucky stars the alcohol I imbibed in the ice cave does not choose to reappear again. Then, fortified by Dutch courage, I sleep through the rest of the descent.

The writer's trip was sponsored by Reyka Vodka.

This article was first published on August 9, 2015.
Get a copy of The Straits Times or go to straitstimes.com for more stories.