The living goddess of Hawaii's volcanoes 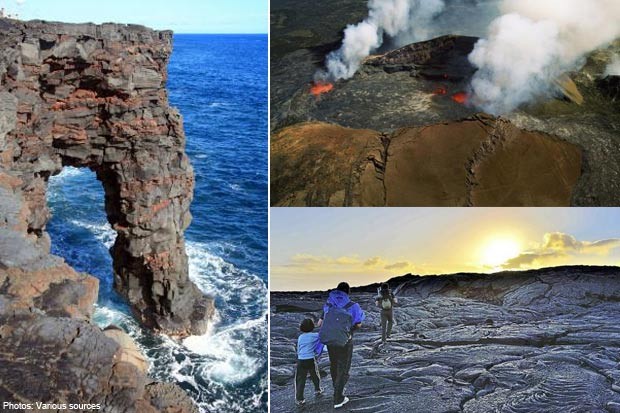 HAWAII - Mysticism, marvel and sometimes mayhem surround Kilauea, one of the world’s most active volcanoes on Big Island, Hawaii. Said to be the home of Pele (pronounced pay-lay), the Goddess of Volcanoes, Kilauea is as spirited and rambunctious as its dweller: spewing molten lava, devouring homes and villages, as well as giving life to new lands.

Hawaiian legends tell of Pele’s travel from the islands of Tahiti in search of a new home to contain her fires – moving from northwest to southeast down the island chain until she finally settled down in Halemaumau, a crater within the Kilauea caldera where she resides until today.

By digging with her magic stick, the paoa, she was able to dig fire pits to form craters such as Oahu’s Diamond Head and Maui’s Haleakala, which are now dormant volcanoes.

Inside the park, I could see smoke billowing from the Halemaumau crater. Venturing further proved futile as rain poured down relentlessly. Perhaps, it was crossfire between Pele and one of her lovers, Kamapua’a. It is said that Kamapua’a would lash at Pele with torrents of rain to douse her fires and send wild boars to dig the soil for seeds to grow.

I sought shelter at the adjacent Jagger Museum, which houses an impressive collection of equipment and exhibits on volcanology. Equally compelling are the stories and murals of Pele, depicted by local artist Herb Kawainui Kane as a striking woman with smouldering eyes and jet-black lava-flowing hair.

Pele has often been described as jealous, fickle and tempestuous, and is feared for her destructive nature – ravaging homes and villages, and destroying forests. Yet, she can also be tender and nurturing, as seen in the growth of new scrubs and forests on the lava fields. She is revered for creating new land.

Such is the personification of the constantly changing and dramatic landscape of Big Island, created by ongoing eruptions. The eruption of Kilauea Iki crater on November 14, 1959, enthralled more than 750,000 visitors who came to witness lava fountains shooting up to 580m, higher than the Petronas Twin Towers.

Instead of waiting out for the feud between Pele and Kamapua to wane, I decided to explore the Thurston Lava Tube.

The 0.8 km roundtrip hike took me through an underground tube that was created after lava drained from it hundreds of years ago. Lava flowed through here at 1,090 °C, re-melting the ceiling and inner walls to form stalactites from molten rock.

By the time I emerged from the tube, the rain had ceased. I embarked on a 2.3km hike over 400 to 700-year-old lava flows to see the largest field of petroglyphs in Hawai’i at Pu’u Loa (Long Hill). The petroglyphs record the history and culture of ancient Hawaiians who used sharp as well as blunt stones to carve on rocks.

The name puuloa also implies “hill of long life”, therefore families would bring and bury their child’s piko (umbilical cord) here, hoping that the child would be blessed with a long and prosperous life. Each hole was created to house a single child’s piko. Of over 23,000 petroglyphs found in Pu’u Loa, 16,000 are piko-related carvings.

From there I took a leisurely drive down the Chain of Craters road past old lava flows before heading to the end of the road, where lava had flowed into the ocean.

Here, thundering waves pounded against lava cliffs. Marvelling at the Holei sea arch, a 25m-high natural arch, one can only imagine the driving force of nature as lava and ocean collided once upon a time.

The entire park represents the living history of geology, where nature and culture intertwine seamlessly.

Here, displays present facts alongside local folklore, making the volcanoes glow with life as dramatically and spellbindingly as the Goddess who rules these lands.

No visit to Big Island is ever complete without an encounter with flowing lava, especially when it is accessible for safe viewing. The Hawaiian volcanoes are considered “benign” even when erupting compared to Indonesia, Iceland or Japan, where eruptions were explosive and deadly. The Kilauea volcano has been erupting steadily since 1983, and although the villagers are powerless to stop its flow, they are able to react and evacuate before it claims their homes in most cases.

Wanting to experience the lava at close proximity, my family wanted to embark on a lava hike. However, there were many reasons to sway us into choosing a docile helicopter ride or boat tour instead.

For one, it would be the longest hike attempted with the kids: an 8km roundtrip of over six hours. Second, it would be trekking on rough, uneven and even jagged lava terrain. And third, we would be hiking back in the dark.

But Pele beckoned like a siren song. And so, we engaged a geologist from one of the tour companies that specialises in lava hikes. Starting our journey from a private estate in Kalapana – lava flows are on private land – we headed out in high spirits, undeterred by the slight drizzle.

We hiked through the lava flow of 1983, where the fields are covered with scrubs. The rich volcanic soil had softened for plants to grow. Kamapua’a wild boars had also gone to work. As we trekked further, the lava fields became barren; here, the lava flow was more recent.

The hike proved to be long with no end in sight. Miles of black glistening lava stretched across the vast horizon as we followed in the footsteps of our guide, mindful not to step on jagged edges. As the sun sank into the horizon, we could see smoke stemming from the Pu’u Oo vents from a distance, and the grounds became warmer.

We saw the first glow of lava from the cracks on the grounds. More sightings followed. Across the endless fields of black, glowing crimson blobs of lava greeted us. Some flows moved with syrupy slowness, stilled then dimmed as if someone had doused its flames.

We learnt that lava oxidizes and hardens the moment it reaches the surface, forming black crusts on the surface. Using a hammer, our guide broke open a crust and fresh lava clung to the edge of the hammer, as well as long strands of glass, known as Pele’s hair. We stood transfixed in the pouring rain, watching red hot molten lava as it gurgled and spluttered, intent on crafting its signature on the ground.

The return journey proved arduous in the dark, with only the moon and head lamps for light. We saw a woven basket filled with oranges and flowers. Hawaiians would make offerings to Tutu Pele or Grandmother as she is fondly called, before the consumption of ohelo berries on the land, and local tour guides often continue the tradition for the safety of their visitors.

Half way back, I realised my missing backpack. The guide attempted to retrace our steps but the vast land and darkness made his efforts futile. The last few hundred steps were the hardest as our energy and stamina dwindled amidst the lashing rain and wind. Step by step – climbing past lava mounds, hopping over cracks and gliding on loose soil – we made it back to our car at 9:30pm. For six hours, we had journeyed on living earth, interacted with the force of nature and developed an affinity and respect for the land. My last thought before succumbing to exhaustion on the bed: I hoped Tutu Pele liked the chocolate chip cookies inside my backpack.*

* The backpack was recovered two days later by other people, but we never claimed it back as we had already gone elsewhere.

Preparing for a lava hike

The guide will pack and carry most equipment like headlamps, snacks and water, but personal items such as those listed below are essential to ensure a safe and enjoyable hike:

• Wear sturdy shoes, hiking shoes if possible. Be prepared for sharp lava rocks to wear down the soles of shoes. Definitely no open-toe sandals or slippers.

• Pack a waterproof jacket. The weather is unpredictable and it can get chilly at night during the return hike.

• Wear long pants as a fall can cause not only bruises but deep cuts.

• Wear gloves, as we tend to use our hands to break our fall. Lava rocks are sharp.

Getting to and around Big Island:

1. A popular choice is to take a one-hour scenic helicopter ride. Some companies offer a door’s off experience! Flights take place only during the day and weather conditions can mar the viewing of lava.

2. The sunrise or sunset boat rides would be a great option only if lava is flowing into the ocean. Those prone to sea sickness should avoid this option.

3. Hiking to the lava flow provides the greatest proximity. However, this is the most strenuous option and not appropriate for those with limited fitness.