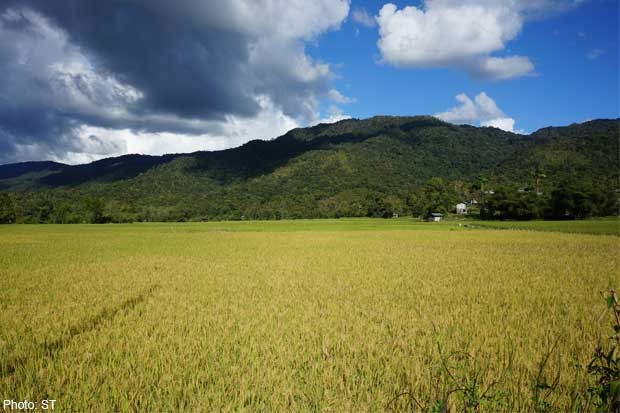 It was almost like waiting for the new Pope to be chosen as we stood watching for the smoke. A cloud of white drifted from the faded green hut at the far end of the pasture, rising to meet the clouds above.

They were there: the women who make salt.

We crossed the pasture ringed by forested mountains and over a covered wooden bridge to get to the hut where two women were feeding hefty logs into a roaring fire.

This is where the people of Ba Kelalan make salt from the salt springs that dot the mountains of north Sarawak, the only place in Borneo where salt water bubbles up from the ground.

It is hard work. I sat on a low bench to watch the women draw salt water from the well and pour them into drums balanced over the roaring fire. The water must be kept boiling for at least 24 hours to crystallise it into powdery white salt rich in iodine.

I dipped a finger into the salt and tasted it: less salty than store-bought salt.

"The Ba Kelalan salt is special because it is tasty and healthier," said Mrs Agustin Dawat, around 45, who has been making salt since she was a girl. The salt springs can be used by any villager willing to chop and cart firewood there.

Why not, I thought. I filled a bucket to top up the boiling water and immediately got splashed as the weight of the pail caught me by surprise, to the amusement of the women who think nothing of hauling heavy buckets that weigh around 10 to 15kg. It was heavy work. I decided to help Paulus pack the salt instead.

The salt springs were discovered generations ago by hunters who found that their prey tasted better when it fell into these salty pools.

The people soon began using the tasty water for cooking and later learnt how to make salt, and still do so up to today in Ba Kelalan. They use the salt for themselves, sell it to other villagers and to the town as well.

Ba Kelalan is the collective name for the nine villages nestled in the Tamabo mountain range that divides Borneo into Malaysia and Indonesia. The international boundary is just 4km away while the nearest Sarawak town of Lawas is 150km.

Hidden in the remote Heart of Borneo conservation area, Ba Kelalan is surrounded by dense rainforests for hundreds of kilometres all around. At 1,000m above sea level, its days are fresh and nights cool with temperatures often dipping below 20 deg C.

Like most visitors, I stayed in the biggest village of Buduk Nur, a remarkably scenic village ringed by lush rice fields and forested mountains shrouded in wispy mist. Home to around 100 people, it has "roads" which are cement walkways which villagers share with dogs, cats, chickens and buffaloes, and the occasional motorcycle.

The village lives off the grid, with electricity coming from generators for a few hours at night or solar panels, and water directly from the rivers.

Right in its centre is a huge church which can seat 1,000 (the main religion here is Christianity from the Borneo Evangelical Mission denomination) and a large field for football and other games.

Its tiny "commercial hub" comprises a couple of general stores crammed with sundry goods, vehicle spare parts, and agriculture needs such as wheelbarrows and barbed wire.

And what would life be without cafes to linger at with coffee? There are few of these too. The cafes are pretty rustic and basic, some with homemade tables and plastic chairs. They serve either local coffee or instant coffee.

It takes just 10 minutes to see the village on foot but it is much better to see it as a bird does. And so we did, by taking a short trek up a hill for breathtaking views over the valley and beyond.

There are two viewpoints and I visited both as each trail is just half an hour long. It takes about 10 to 15 minutes to walk to the start of either trail and then it is a steady climb through the forest, but not killer-steep.

Both are easy even for first-timers, albeit with some huffing and puffing, and rewarded us with vast views over the village and padi fields.

Standing high above the land, it is immediately apparent how important wet rice farming is to this Lun Bawang hill tribe whose forefathers had carved out the fields a long time ago.

The village is surrounded by a vast jigsaw of interlocking green and gold rice paddies, mesmerising in their beauty.

Rice farming is still carried out here the old way - by hand, without machines, and without fertilisers or pesticides. Mountain streams water the fields and buffaloes fertilise and plough them.

Ba Kelalan's school teacher Sang Sigar - and my host - said the people do not use machinery, fertilisers or pesticides because the old ways work best with the fragile environment. "It is sustainable and works best with our environment," he said in English.

During planting season in August and September, the fields are filled with men and women bent over to plant each and every seedling by hand.

It does not look that hard but I can confirm that rice planting is very hard work because I tried my hand at it... Oh, my aching back.

It takes much patience to bend over for hours to push each flimsy stalk of padi into the mud, one after the other. After planting about a million seedlings, I stood up and looked in dismay at the very tiny corner that I had covered. And I also seemed to have planted myself into a corner.

Visitors are welcome to help with padi planting, harvesting or winnowing but they do not have to, of course.

Being part of this mountain village life, or just watching life go by, is the charm of Ba Kelalan which entices visitors to find their way here on the tiny Twin Otter plane operated by Malaysia Airlines' rural air service. These 18-seater planes are an adventure in themselves for those unused to small aircraft.

For those seeking even more adventure, Ba Kelalan is also known for its tough mountain trails.

Sarawak's highest mountain, Mount Murud, is a two-day walk from Buduk Nur. Or they may try the three-day challenging trail to the neighbouring settlement of Bario. Both these trails are meant for experienced hikers.

Ba Kelalan is best experienced, though, by slowing down to breathe the fresh mountain air or walking under a blanket of stars on a clear night.

With hardly any artificial lighting in the village, the glittering stars have the entire velvet sky as their playground. Their silvery light was bright enough to light our walk along the padi fields one clear night.

Do watch out for slumbering buffaloes, though.

"Once people come here, they always want to come again," said Ukab Labo, a young man who grew up in the village.

This article was first published on June 29, 2014.
Get a copy of The Straits Times or go to straitstimes.com for more stories.