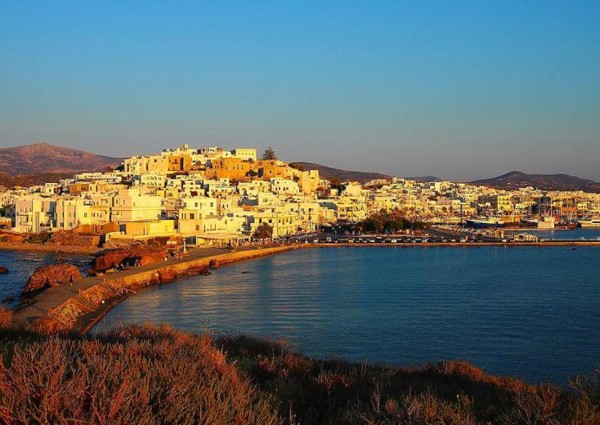 Naxos at sunset is truly a sight to behold.
Asnah Ahmad/The New Paper

Instead of the expensive Santorini, try the underrated Naxos

Whenever one thinks of Greece, Santorini - with its identifiable Cycladic white-and-blue buildings and the famous blue-top church in Oia - comes to mind.

The island is extensively promoted by the Greek tourism authorities and travel industries around the world, and it seems to be on the top of the list for most when travelling to the Hellenic Republic.

According to most travel magazines, guide books and websites, there is nothing more bright and idyllic than the cliff-side walkways of Santorini.

I beg to differ.

While it certainly has amazing views of the Aegean Sea, I personally find it teeming and bustling.

Instead of spending time meandering along the cobblestoned walkways, you have to fight your way through the crowds.

The tourist-mobbed island that sees more than half-a-million visitors a year, makes this "paradise" an overrated beach destination, not to mention maddeningly expensive.

And that is certainly not my idea of an island getaway.

It was my pursuit of an authentic experience that prompted me to look towards the less popular islands, and spend just one night on Santorini.

But, there are so many Greek islands that it was indeed hard to choose.

Greek sovereign land includes 6,000 islands and islets scattered in the Aegean and Ionian seas, of which only 227 are inhabited.

Most of them are found in the Aegean Sea and are divided into seven groups (from north to south).

Santorini belongs to the Cyclades, a group of 56 islands that are more commonly visited.

Some of the other islands that fall in this group include Andros, Kea-Kythnos, Milos, Mykonos, Naxos and Paros.

If you are into the party scene, you might want to consider the trendier Mykonos, Ios or Corfu.

But if you are not, Naxos is ideal.

It is rarely on the must-visit list of travel sites - something I find puzzling, especially after having been there.

I found out about it when I was looking through a map of the Greek islands.

After Googling its name and reading just one or two reviews by other travellers, I decided it would be worth exploring.

The first sight of Naxos from its picturesque harbour made the hours trawling the Internet so worth it.

A quiet oasis, charming and breathtakingly gorgeous from all angles.

Naxos is everything Santorini is not: Private, laid-back and full of local flavour.

It is perfect for those looking for a little Greek culture and nature to go along with their holiday.

There is no shortage of quirky little shops and craft markets in the narrow alleyways of Naxos.

The buildings have a lovely island feel and the Venetian architecture dominates - with hints of blue sky and sea - making them the perfect retreat from the sun.

The beaches in Naxos are among the most beautiful in Greece, and are located just a few minutes' drive from traditional villages perched on mountaintops.

Most are great for diving, with their rich coral reefs, wrecks and crystal clear waters.

A commercial centre that does not depend only on tourism, Naxos has a year-round population of Greeks and foreigners, and boasts a good public transport system, making it convenient to get around.

It is also famous for its variety of cultural events and traditional fairs.

The island consists of several mountains separated by green valleys, vineyards and orchards.

Naxos was once conquered by the Venetians so you can also see many Venetian towers there, some ruined and others turned into museums.

There are not many islands with their iconic archaeological site located right on the harbour, and visible even from your ferry as you approach the island.

The rectangular frame is the Portara, the doorway to the ancient Temple of Apollo.

Construction on the structure began in about 530BC but it was never completed.

Lygdamis, the tyrant ruling Naxos then, intended to make it the largest and most glorious temple in Greece.

But he was overthrown before it was completed.

The Portara is 8m high and made of four blocks of marble.

The view of the Portara in the sunset against the blinding whitewashed houses on the cliffs is truly a sight to behold.

Naxos' understated natural beauty will leave you with some of the most magical memories of Greece.

This article was first published on Mar 17, 2017.
Get The New Paper for more stories.