Shopping for antiques in Bandung 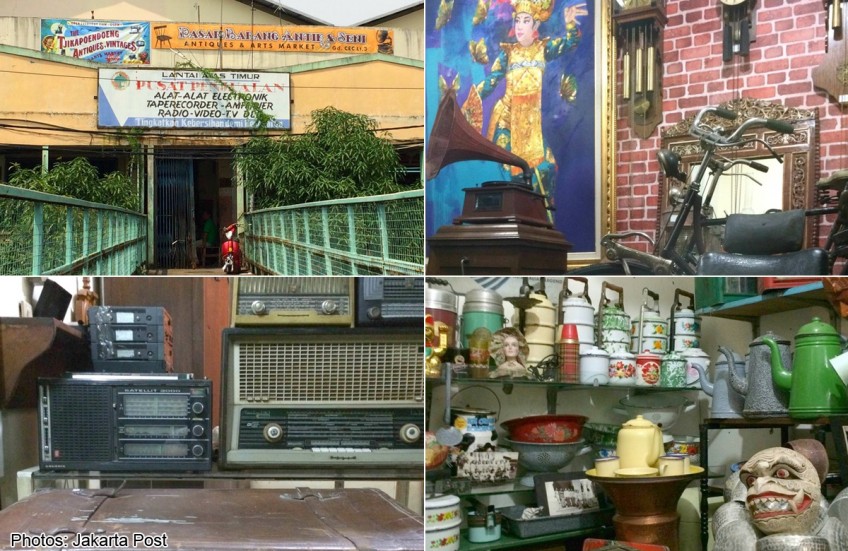 I came across the Cikapundung antique market as I was driving down Jl. Cikapundung Barat turned onto Jl. Naripan.

There, on the wall of the end building, was a huge banner adorned with a painted blonde girl with red lips and red writing advertising "Tjikapoendoeng Antiques & Vintages".

My curiosity aroused, I decided to pop by the market on a Saturday at 11 a.m.

I started my trip from Jl. Cikapundung Barat where I parked and walked down the street, the Cikapundung River mirroring my direction on the other side.

I crossed Jl. Naripan and climbed stairs leading to a bridge and to the building, known as the CEC (Cikapundung Electronics Center), where the banner was hung.

From there, I climbed to the third floor and was awarded an unusual yet interesting view of the Braga and Cikapundung areas that I had never seen before; a mix of dense and chaotic housing and buildings that have landmarks and icons in the Braga area.

Reaching the third floor, the place was rather quiet -- many stalls appeared to be closed. I explored the alleys and finally found one with a bustle of activity.

"You should have come in the afternoon or at least after lunch time," said Jacky, owner of Ambas Shop.

I was glad to meet him as he became my guide, telling me stories of vintage and antique items found here and the market's history.

According to Jacky, the market was inaugurated around two years ago by Bandung Mayor Ridwan Kamil and was now run by an antique-seller association led by Haji Dany Yudiana.

"The problem is, we still haven't got a decent parking lot and a green garden as promised to us," Jacky addressed the issue of why the market was rather empty, quiet and "hidden".

An adequate and accessible parking lot is crucial to bring customers to businesses in Bandung.

Yet, despite not having many visitors, Jacky said the market was quite well-known among tourists from Bangkok, Malaysia and Singapore who came to hunt for vintage and antique items.

"The Thais are more general, but Malaysians usually hunt for clocks, while Singaporeans are usually after furniture, besides clocks," Jacky added.

He then showed me around several shops and pointed out some old clocks mounted on the wall, reminiscent of old movies or your grandparent's house. From time to time, the clocks would emit loud and rather eerie tolls.

"Junghans is among the most sought-after vintage clock brands," Jacky said, pointing out a cupboard-sized clock with dangling bells visible through the glass front.

The brand produced clocks, he said, whose quality was not diminished by the decades.

"Usually the collectors prefer old clocks with eight sticks and three holes. The eighth stick determines the music and the older the clock, the more expensive it gets," Jacky said.

His colleague who sold the clocks then told me that their prices ranged from Rp 2 million (US$153.2) to Rp 3.5 million, while standing clocks could start at Rp 20 million.

Jacky and his colleagues said that they usually scavenged while traveling to remote villages in Malang, East Java, or around West Java. They would try to find items from residents' houses after noticing their furniture.

Next, Jacky showed another favourite item among collectors: a gramophone. Jacky brought me to another colleague, who demonstrated one he had just cleaned.

The device played vintage-sounding music, bringing a nostalgic mood to the air and painting images in your mind of romantic films set in war-time. No music player today can produce a similar sound.

I ended the exploration in one alley full of paintings that were just left in the middle, as if abandoned.

But according to Jacky, the paintings were actually being displayed that way and indeed, some were incomplete.

The market fascinated me; I left enchanted by the beauty of the craftwork of yesteryear, so achingly absent from the poverty of modern life.