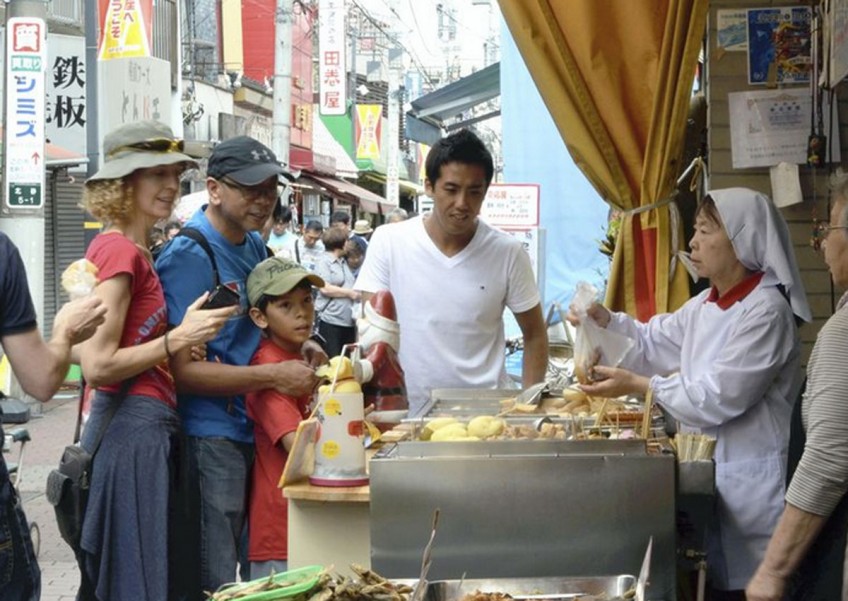 Shotengai neighborhood shopping streets are a fun way for foreign visitors to experience everyday life in Japan, thanks to organised tours that let participants sample recommended dishes and interact with shop owners.

In early June, six travelers from overseas embarked on a tour of the Sunamachi-Ginza Shotengai shopping street in Koto Ward, Tokyo. The 670-meter-long thoroughfare is home to about 180 stores that sell food, clothing and daily necessities.

Their tour guide shared trivia along the way, telling them, "The recipe for this yakitori sauce is a family secret," or "This tea shop has been around for more than 70 years, and the current owner is the third generation."

Over the course of about three hours, the participants ate yakitori and tried their hand at Japanese tea-making.

American Shellie Javier, 44, signed up for the outing with her family. She said her stroll through various shops peddling tableware, shoes and other goods gave her a firsthand glimpse into the ordinary lives of Japanese people.

So far, 19 tours with a total of 52 visitors have been organised. No special preparation is required on the part of participating merchants.

"These streets tend to have family-run specialty stores that have been handed down for several generations," said Knot World director Yu Kono. "For those from outside Japan, the history might be interesting, too."

According to Daniels, in England it is rare to see cooks preparing food directly in front of customers or elderly people showing passionate dedication to their work, especially in a big city.

In Osaka, Swissotel Nankai organises a free tour of the local Sennichimae Doguyasuji Shotengai shopping street every Friday for non-Japanese guests. Executive Assistant Manager Kazunori Tanaka takes them to an about 130-year-old area that specializes in knives and other kitchenware.

More than 200 guests have opted to take the tour since it was first offered in January.

"The area isn't in guidebooks, so it isn't touristy yet," Tanaka said. "That's probably why it's such a hit."

Last year, Japan saw a record 13.41 million tourists. According to the Japan Tourism Agency, 43.1 per cent were first-time visitors traveling for sightseeing or leisure, while 17.1 per cent were on their second trip to the country. The number of repeat visitors was high, with 11 per cent having been to Japan 10 or more times.

"Those repeat visitors tend to want to experience daily life here instead of heading to the big-name attractions," said Shinichi Shimizu, who lectures about tourism at Rikkyo University. "Shopping streets seem to be the best place to do that."

Some shopping district associations are especially prepared to welcome travelers from abroad.

Yurinoki-dori Shotengai shopping street is taking advantage of its location in Hamamatsu, a regular site of international music events. The area organises hands-on activities to give visitors a chance to wear a kimono and practice calligraphy.

Seiji Okano belongs to a group of younger merchants in the Sennichimae Doguyasuji shopping area. "Foreigners who visited sometimes post feedback online, so we have an idea of what they liked. At the same time, local residents can rediscover all the great things about our shopping area," he said. "That eventually becomes the driving force that sustains these shopping districts."

According to the Japan Shopping District Support Center, there are about 13,000 shotengai shopping districts nationwide.

"They serve as an open kitchen for people in the community. They're a place where people of various generations feel at home, from elderly people to mothers," said Toshihiko Kuwajima, the centre's president. "That's why foreigners find them fascinating."

However, many such districts face the closure of their shops when large supermarkets open up nearby, Kuwajima said.

"Merchants can revitalise their areas by bringing out their individuality, such as by creating scenery that's unique to the district or raising the profile of shop owners. At the same time, it's important to make a safer environment for shoppers by minimizing stairs and controlling traffic," Kuwajima said, adding that bustling shopping districts are a boon to communities.

Kenjin Takeda, editor-in-chief of the city magazine "Sanpo no Tatsujin" (Master of strolling), said the cosy, comforting atmosphere of small shops lined up next to each other is one of the selling points of Japanese shopping streets.

"Visitors get to know the place, since they deal directly with the owners and can look at displays closely. They're fun places to visit," he said.

Takeda offered six tips on how to enjoy strolling through shopping districts:

1) Dress comfortably for a long walk and avoid carrying anything in your hands.

2) Walk the street from end to end.

4) Find foods that are fresh from the oven. (It's fun to pick a "food of the day" - such as croquettes from meat shops - and sample the flavors in different shopping streets.)

5) Converse with the shopkeepers (It can make the experience memorable.)

6) Closely examine how displays are put together. (The way that goods are showcased differs from region to region. Handwritten price tags are also cute.)

To find out more about Japan's attractions, visit http://the-japan-news.com/news/d&d