Karen Lim
AsiaOne
W.T.M. Why This Matters
Airlines around the world have been coming up with creative or quirky safety video demonstrations to keep passengers captivated. Singapore Airlines' new video is shot at various locations in Singapore - and some safety demos are done at the oddest places.

Airline safety videos are akin to tech manuals - people rarely read or watch them. Those who travel frequently would have seen safety demonstrations being done so many times, that most of us would rather be getting some shut-eye instead.

In order for passengers to pay attention to instructions that might save lives, airlines around the world have been trying to outdo one another by introducing quirky and creative safety videos to keep passengers captivated.

Our very own Singapore Airlines (SIA) has also recently unveiled its new in-flight safety video that gives a different take on its safety demonstration - by taking passengers out of the aircraft cabin.

The 5-minute video shows the Singapore Girl, cabin crew Elizabeth Quek, travelling through familiar landmarks such as Boat Quay, River Safari, Gardens by the Bay, and so on.

While she traipses all over the city, showing various kinds of scenery - which were beautifully shot, by the way - she also goes through all of the safety instructions that are required. And some are demonstrated at places that seem a little bit...out of place.

"Ensure that your tray table is stowed away"

At The Intan Peranakan Museum, a woman is seated on an antique-looking wooden chair while the SQ Girl talks about stowing away the tray table and keeping the seat upright.

"An oxygen mask will automatically drop in front of you"

Ok, this managed to incite some giggles in the office. For the safety demo on oxygen masks, where the masks will drop automatically in the aircraft cabin when there is a change in pressure, the demo was filmed along Haji Lane where two masks magically dropped mid-air.

At Adventure Cove, safety instructions on how to wear life vests:

At Capitol Theatre, electronic devices need to be switched off:

Although some of the safety demonstrations seemed a bit awkward at first glance, the way the video was shot did indeed paint Singapore as a beautiful garden city, with warm sun rays penetrating our alleyways and landmarks.

According to SIA, the new safety video was launched in collaboration with the Singapore Tourism Board to showcase the city state to the world. It won't be screening on SIA flights until end the year but hey, you get to see it here first. 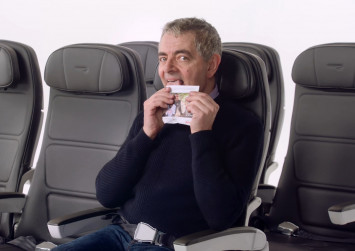