Singapore has world's best airport but Hong Kong is the place to eat?

Hong Kong took the consolation prizes of best immigration and dining experience on Thursday as Singapore's Changi Airport extended its run as the world's best airport for a seventh consecutive year.

Asian airports took the lion's share of accolades at the annual Skytrax World Airport awards for 2019. Tokyo Haneda, Seoul Incheon and Doha all came ahead of Hong Kong International Airport (HKIA), which slipped to fifth, equalling its lowest position in the rankings since 2010.

Hong Kong maintained the title for best airport dining experience for the third year running and also secured the award for immigration services, run by the Security Bureau's Immigration Department. 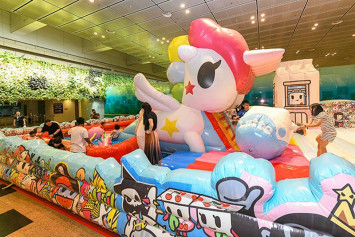 The airport, which had 75 million passengers fly in and out last year, was not ranked in the 10 best for its terminal, its revamped website nor the speediness of baggage delivery.

In one of the newer categories, Hong Kong was ranked eighth best for passengers with reduced mobility and accessibility, despite garnering some unwanted publicity in recent months with cases of disabled passengers being denied travel by an airline.

The airport had tried to address the slow transfer of bags by taking over some services from ground handlers and charging airlines a fee for every piece of luggage put on the carousel.

The airport is spending HK$144 billion (S$24.7 billion) to add a third runway and new passenger terminal through land reclamation, expected to be completed by the end of 2024.

In the near term, the operator Airport Authority Hong Kong will revamp the look and feel of all boarding gates, to include new seats and automated boarding gates, which should be complete in 2021.

The strong performance in dining could be traced to an increase in high-end, gourmet dining options including Beef & Liberty, Caviar House & Prunier and Lady M patisseries.

Singapore will in April unveil its huge new precinct, connected to the terminal buildings, which will include a massive indoor waterfall and new shopping and leisure experiences in a bid to keep its rating as the world's best airport.

Among mainland China airports, Shanghai Hongqiao ranked the best, having benefited from more recent renovation projects and consistently performing well among the nation's airports - despite being much older.

Its newer and much larger hometown rival, Pudong, undergoing a major expansion including a new terminal, was not ranked for the second year running. Pudong suffers from regular air traffic control delays.

Guangzhou airport, which doubled in size with a second passenger terminal in the past year, was ranked in its best position of 39th, rising sharply from a ranking of 104th in 2018. Beijing Capital dropped from 33rd to 72nd.

The Hong Kong Airport Authority pointed out it had been recognised as Airport of the Year 2018 by Air Transport World magazine and Best Global Airport at the freight-themed awards by Air Cargo News.

"HKIA is well recognised for its service excellence," a spokeswoman said. "We are committed to providing passengers with a pleasant and delightful airport experience. "