May Ong
AsiaOne
W.T.M. Why This Matters
Have you noticed the increase in number of Chinese tourists in the recent years? Read on to find out why Singapore and other countries are attracting them.

Singapore as come out as the most favoured Asia-Pacific (APAC) destination for Chinese travellers to visit within the next 12 months, according to a Chinese International Travel Monitor (CITM) study done by Hotels.com this year.

The CITM study, which is done annually, was conducted within a sample group of more than 3,000 Chinese international travellers combined with over 3,800 accomodation partners of Hotels.com. Travellers that were part of the research were between ages 18 and 57, and have travelled overseas in the past 12 months.

Results of the study have shown 'safety' as a key factor in determining their next travel destination. Historical and heritage reasons come close next, followed by the travellers' personal 'bucket list'.

No wonder Singapore topped the APAC charts, with its reputation as a 'safe city' and its colourful heritage harbouring different cultures that are of interest to Chinese travellers. 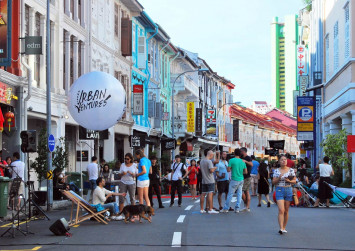 Taking a selfie at Singapore's iconic infinity pool of Marina Bay Sands is also listed in their bucket lists.

Besides that, Singapore attracts a large Chinese audience with Mandarin as one of its four national languages. The easy and abundant access to Chinese food may also be appealing.

However, Singapore ranked ninth in separate list of countries that are most welcoming to Chinese tourists, with Thailand, Japan and Australia taking up the top three spots.

Chinese tourists are now travelling more frequently than before, with the average number of trips across the globe increasing from three to four in the past year.

Trips are also lasting longer, with the number of days per trip increasing from five to seven days.

Over 80 per cent of Chinese travellers surveyed also expressed that they would visit multiple cities per trip, and would not just stay in one city.

The study also observed an increase in Chinese travellers' spending on travel across all age brackets.

On average, Chinese tourists' spending on travel was calculated to be about US$3,600 (S$4,900) in the last 12 months, a 4 per cent increase from the previous year.

A boost for Singapore's tourism industry

According to preliminary estimates by the Singapore Tourism Board in 2016, Chinese tourists in Singapore have been the biggest spenders for two years in a row, contributing to a 36 per cent increase in visitor arrivals.

Hotels across APAC are now recognising the needs of Chinese tourists, turning to social media and marketing programmes.

Solutions may also include an increase in the number of Mandarin speaking staff and offering Chinese payment facilities, according to Hotels.com.