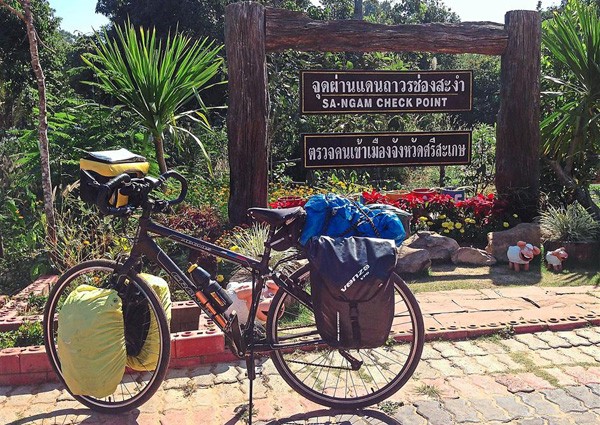 The Dangrek mountain range forms a natural border between northern Cambodia and Thailand and I was about to cross the checkpoint called Chong Sa Ngam.

I had cycled around the ancient Khmer capital of Angkor and was now headed towards the ancient Thai capital of Ayutthaya. But the checkpoint was located right at the top of the mountain pass at 334m. Even though that did not seem very high, the ascent uphill was incredibly steep.

After cranking the pedals for about 10 minutes and feeling every gram of my pannier bags, my thighs gave way. I surrendered and decided to push my bike up.

Chong Sa Ngam was a relatively quiet checkpoint and usually only used by local traders from both the Thai and Khmer side, so I must have been a curious sight plodding my way uphill.

Crossing the border was simple and uneventful. The counters were made up of simple huts and the officers were less than friendly - probably because tourists are rare at this checkpoint.

Soon, I was rolling downhill surrounded by lush forests and greenery, which was a refreshing change after the relatively barren bushlands on the Cambodian side. Several other big differences began emerging - Thai roads had nicely painted lines, ample signages, and a lot more junctions and turns compared to the bare roads of Cambodia.

The part of Thailand I had just entered was the Isaan region, which is a part of Thailand that attracts few visitors. Having earlier adjusted to rural Cambodian culture, I found myself plunging headfirst into rural Thai culture, without the usual tourist trappings to ease myself into it.

Unlike elsewhere in Thailand, where there are abundant signs advertising massages, cafe lattes and money changing, there was a total lack of English signs anywhere for my first two days here, except for major road signs. Even the milestone markers were in Thai.

In Cambodia, I could at least spot words like "hotel" or "guesthouse" in English, but there was no such linguistic luxury in Isaan. I found my first motel by identifying blocks of buildings with identical units and doors! Naturally, I had to negotiate the price of my room with lots of hand gestures and head movements.

However, I really enjoyed this part of the tour, when I pedalled west, skirting the Cambodian border, towards Bangkok.

With a bike, the writer could explore the smaller temples around Ayutthaya at her leisure. Photo: The Star/ Asia News Network.

Roads in Isaan are quiet and undulating. Instead of the busier highways, I purposely connected my route through small rural roads, winding through paddy fields, sugar cane plantations and villages.

These backroads provided the best moments of cycle touring, where I got to interact with locals at every break or meal stop. There may have been a language barrier, but they were all very friendly and fascinated by my bicycle. I got a handful of thumbs-ups on the road; a very enthusiastic ice-cream seller even flagged me down to give me a free drink.

One of the main tourist draws in Isaan are the scattering of Khmer temples similar to those in Angkor. During its peak, the Khmer empire was vast and stretched across into modern day Thailand.

Two of the most iconic ruins are Muang Tam and Phanom Rung. In comparison to the tourist hordes in Angkor, the visitor numbers at these two sites were considerably muted, consisting mostly of Thai locals. Phanom Rung was the more stunning site, located right at the summit of an extinct volcano, with incredible views of the Isaan flatlands spread out below.

Muang Tam is one of the ancient Khmer temples in north-east Thailand. Photo: The Star/ Asia News Network.

I decided to spend a rest day in the provincial town of Nang Rong. Aside from highway 24, which cut through the middle of it, the town had no distinct attractions; it was probably precisely this that gave the town its local laidback charm. Occasionally, an elephant was seen wandering the street with its handler!

I spent a wonderfully lazy day exploring the town, trying out street food, enjoying local coffee, and getting a much-needed massage. Nang Rong has a quaint backpacker hostel that hosts the occasional traveller keen to visit Phanom Rung, so for the first time in five days, I finally met people who could converse in English.

For my journey, I had occasionally referred to blogposts by fellow cycle tourists chronicling their experiences, and I had read about "love hotels" in Thailand. Essentially, these are hotels found along the main highways; rooms are basic with no windows, and there is somewhat, er, "arousing" decor. And, they provide complimentary items like condoms.

So the day I rolled into a small rural town called Chakkarat, locals pointed me 3km out of town to find a motel. I managed to find it, on a quiet stretch of highway with just a petrol station nearby; I also found a horizontal full-length mirror right next to the bed in my room.

That night, as I made my way to the petrol station to find dinner, I passed by a shack that had turned into a neon-glowing speakeasy with some dressed-up ladies lingering about. I was quite glad to have insisted on the cheaper fan room; it was in a stand-alone block so I had no neighbours to provide me with any overnight "soundtrack".

Sometimes elephants would wander down the streets of Nang Rong, a laid-back provincial town. Photo: The Star/ Asia News Network.

My next destination was Ayutthaya, the ancient capital of Siam. As the only roads leading there were mainly busy highways, I decided to take a local train from Chakkarat to Ayutthaya. It was relatively easy even with my bicycle; all I had to do was to buy a cargo ticket, and the bicycle sat in the cargo carriage on the same train that I boarded.

All the railway officers I encountered were extremely helpful and friendly. The convenience of transporting bicycles on the trains really makes Thailand an attractive destination for cycle tourists. The train ride was slow but the scenery more than made up for it; and it sure made for a pleasant change of pace from being on the road.

Most travellers visit Ayutthaya on day trips from Bangkok, but I think this place deserves more time than that. Despite being a tourist destination, the main town itself is quite laidback with great markets and food options.

Ayutthaya has more than 30 ancient sites spread out over the region, and cycling is a great way to slowly explore them. By this point in my cycle tour, I had lost count of the number of temples I had visited. Yet the history of the ancient Thai kingdom was quite interesting and the sites were well managed, so I still enjoyed my explorations.

These boat noodles in Ayutthaya were cheap, filling and delicious. Photo: The Star/ Asia News Network.

Ayutthaya is also where the famous "boat noodle" originated from. Contrary to the small, modified version we find in Kuala Lumpur, the original version here had at least five mouthfuls of noodles, meat and vegetables.