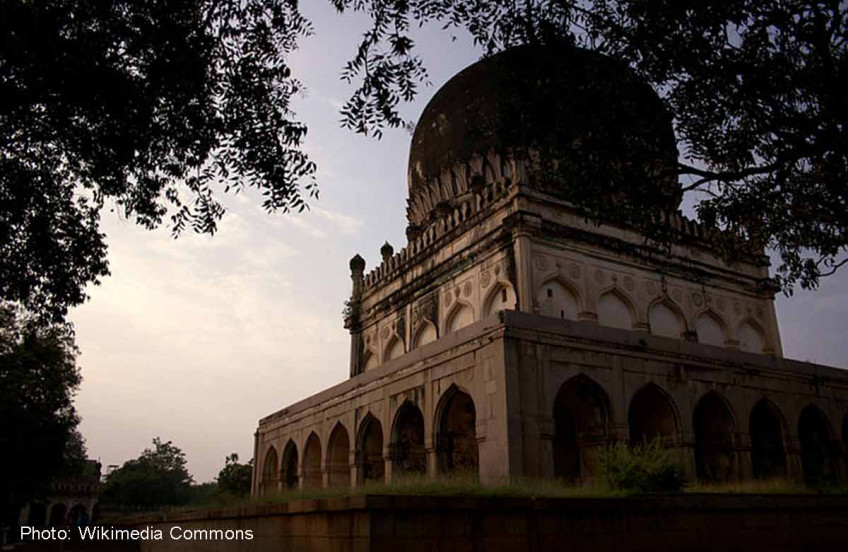 I first heard of the Qutb Shahi tombs from a local golfer who played regularly at the Hyderabad Golf Club.

"It's the most magnificent architecture in India," he said. He also told me that the idea for the Charminar monument and mosque in Hyderabad came from the Grand Mosque at the Qutb Shahi Tombs.

I was born in the city and studied there, and, I was embarrassed that I had never been to this wonderful monument.

The next day, I hired a car and set out to find Ibrahim Bagh, where the tombs are located. I was flying back to Singapore that evening, and having already seen many times the grandeur of the Golconda Fort nearby, I gave myself about 30 minutes for a quick tour of the tombs. Google Maps proved its worth, giving accurate dier's broken English and my poor Telugu (the local language), we got there pretty quickly.

Emerging from the car, I saw magnificently proportioned, graceful domes framed against an azure sky. Weatherbeaten, but simply wondrous.

Sitting serenely in landscaped gardens, the graceful domed tombs of seven of the nine Qutb Shahi kings are an unforgettable sight. The complex consists of 30 tombs, mosques and a mortuary bath.

It is an outstanding example of the graceful and distinct Qutb Shahi school of architecture, marked by liberal use of minarets, arches, domes and columns. It stands as a unique testament to the diversity characteristic of the mediaeval period in the Deccan region.

The Qutb Shahi Dynasty integrated the Iranian origins of the founder and its noblemen with the more established Deccani Muslims and the local Telugu-speaking Hindus. This integration of the multiethnic and multi-religious society led to a wonderful fusion of Persian, Hindu and Pashtun architecture with intricately carved stonework and gorgeous geometric fusion across the various tombs and the attendant structures, including the mortuary bath and mosques where the last rites were performed.

The tomb complex belonged to the Sultans of the Qutb Shahi Dynasty, their queens and children, and noblemen who served the dynasty, spanning a 130-year period from 1543 to 1672.

The most modest of the tombs, ironically, belongs to the founder of the Qutb Shahi dynasty, Sultan Quli Qutb-ul-Mulk. He designed it himself and the tomb is symmetrical while simple, almost austere, in its design.

The most impressive is the tomb of Hyderabad's founder, Sultan Muhammad Quli Qutb Shah, with a large impressive dome, 28 exquisitely proportioned arches and minarets and richly ornamented parapets.

Most of the tombs have two storeys, with the burial vault in the lower crypt and the impressive visitor-vault in the upper crypt. Many of the domes were originally inlaid with blue and green tiles, but with the ravages over time, only a few now remain.

Immersed in the sculpted beauty of the necropolis, I spent around three hours there. I could have spent a lot longer - the history and the stories of each of the sultans and their noblemen and courtesans were fascinating. It was as if each brick had a story to tell. However, my flight home beckoned and reluctantly I had to leave.

The Qutb Shahi tombs serve as a reminder of everything magnificent about mediaeval India.

■ Car hires are available from all hotels. Check that the driver knows the way there. Ensure you tell the driver to wait while you enjoy the sights. If you are adventurous, take an "auto" - an Indian "tuk-tuk".

■ Expect to spend at least two hours exploring each of the various tombs, mosques, the mortuary bath and the garden. If you can spare the day, see the Golconda Fort as well.

■ Most guides speak English. They are well versed in local history and can regale you with wonderful anecdotes. Ask the guide to showcase the surprising and unforgettable acoustics under the larger domes.

■ Dress modestly. In winter, take a light sweater as it can be chilly in the evening. Take small change to pay the licensed guides.