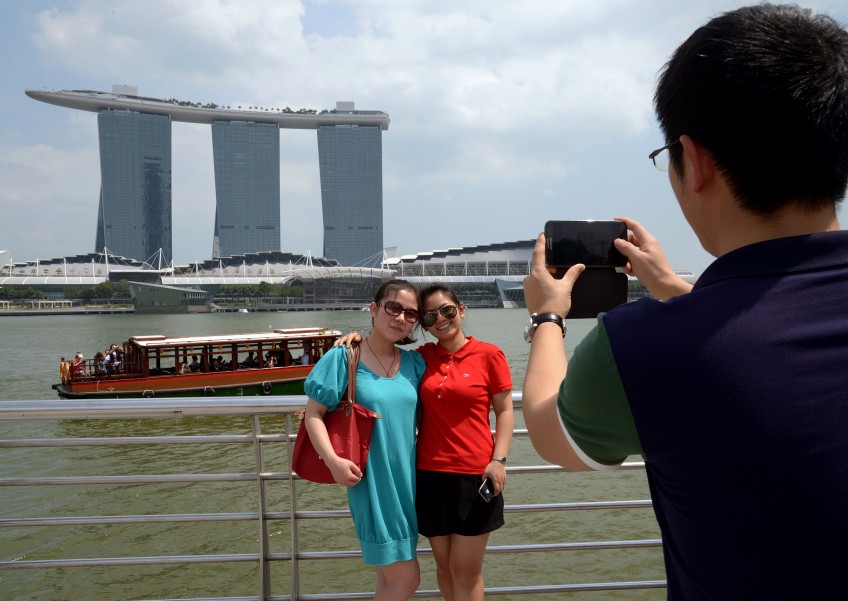 Chinese tourists accounted for the second highest number of visitors to Singapore last year, says the MasterCard report. China’s share of tourists to 167 destinations in the Asia-Pacific grew from 5.9 per cent in 2009 to 17.7 per cent last year.
The Straits Times

Singapore was the second most popular destination in the Asia- Pacific among international visitors last year, after Bangkok, a new report has found.

Despite the hype surrounding the Republic's Golden Jubilee year, the number of visitors who stayed at least one night here - 11.81 million - dipped 0.4 per cent compared with 11.86 million in 2014.

Experts attribute this to the strong Singapore dollar and an unstable geopolitical environment in the region last year.

The top three sources of visitors to Singapore were Indonesia (16.1 per cent), China (13.9 per cent) and India (7.3 per cent), together accounting for more than a third of total arrivals.

The index ranked 167 destinations, drawn from 22 countries in the Asia-Pacific, according to the number of overnight visitors, their length of stay and total spending.

On average, last year's visitors to Singapore spent US$255 per day, and stayed 4.7 nights each.

The tourism industry in the Asia-Pacific is the largest in the world, based on total contribution to gross domestic product, having overtaken Europe in 2014. The robust growth is set to continue, driven by increased consumer wealth, particularly from China, said Mr Matthew Driver, group executive of global products and solutions in the Asia-Pacific at MasterCard.

China's share of tourists to the 167 destinations in the Asia-Pacific grew threefold over the past six years from 5.9 per cent in 2009 to 17.7 per cent last year.

The strong Singdollar last year made Singapore more costly for visitors, he said. "The Bangkok bombing also slowed things down for the region, for a while.

"If things remain stable, the recession doesn't get as bad as people expect and there are no external threats, this year, we will at least do as well as last year."

Most popular destinations in the Asia-Pacific: