Tourists flock to visit dams, bridges and roads in Japan 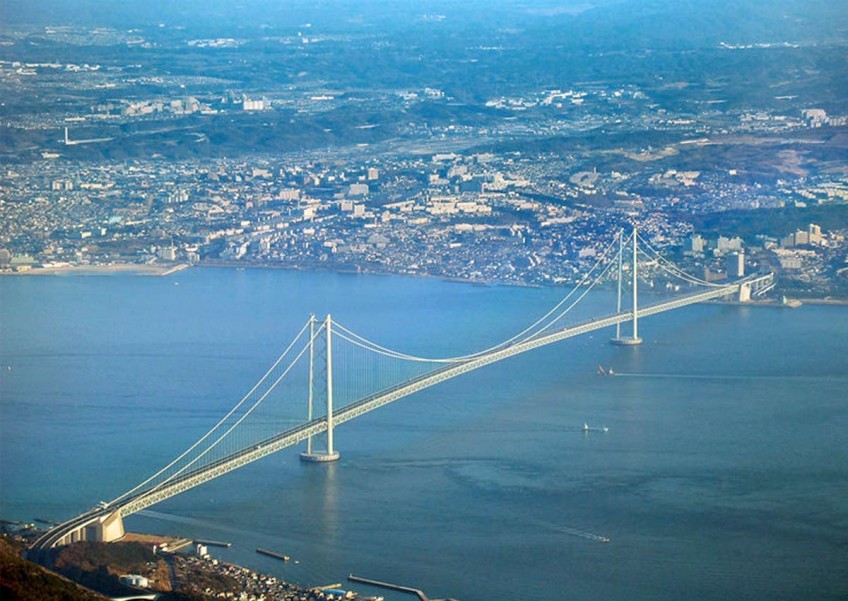 "Infra-tourism," or sightseeing at large-scale infrastructure utilities such as dams, bridges and roads, is gaining popularity. Visitors can enjoy dynamic views such as the thunderous discharge of water at a dam, or a suspension bridge from high above, while also learning about the roles of utilities.

On the afternoon of May 28 at Yunishigawa Dam in Nikko, Tochigi Prefecture, an amphibious bus sent up an enormous splash as it entered the dam reservoir, causing the 15 passengers to erupt into cheers and applause.

As the bus cruised close to the dam, a female guide explained what we were seeing. Visitors could see the dam's interior, top and discharge, learning about its role and how it came to be constructed. "The amphibious bus was impressive. It was a valuable experience for us," said a 58-year-old company employee from Kasugai, Aichi Prefecture, who joined the tour with his wife.

"The scenery was also lovely, and I learned about dams," he added with a look of satisfaction.

The tour, organised by a council comprising the Nikko municipal government, the local association of Japanese inns and other organisations, lasts 80 minutes and costs ¥3,000 per adult, tax included.

It is only available between April and December, and attracted 22,899 participants last year.

Such utilities throughout the country accept tourists. At Akashi Kaikyo Bridge in Hyogo Prefecture, visitors can look down on the suspension bridge built over the strait from high atop a support tower on the Kobe side, about 300 meters up, at the tax-inclusive cost of ¥3,000 per adult.

The Metropolitan Area Outer Underground Discharge Channel in Kasukabe, Saitama Prefecture, which takes in floodwater from heavy rain and other causes and diverts it underground into the Edogawa river, offers tours of its surge tank 22 meters below ground.

The facility boasts a unique view. The rows of 18-meter-tall concrete pillars, 59 in all, make the space feel like an underground temple. Admission is free, but applications are required.

Tours to dams and other utilities became popular in the 1950s, when Japan entered its period of rapid economic growth. One standout example is Kurobe Dam in Toyama Prefecture, built in 1963 by Kansai Electric Power Co. and known as the setting for the film "Kurobe no Taiyo."

Trolleybuses to carry tourists went into service in the year following the completion of the dam, which even now attracts crowds of sightseers.

However, as recreation throughout the country diversified, tours to dams and large-scale infrastructure utilities generally lost their appeal.

This trend began to change in the 1990s. "With the development of the internet, social media and other forms of communication, the popularity of dam tours grew nationwide," said Eiji Sakai, executive director of the Japan Dam Foundation.

Dam aficionados became able to post on websites, and as information spread even further via Facebook, Twitter and other means, more people started saying they wanted to visit dams.

From the last half of the 2000s, photo books featuring dams and other infrastructure facilities began being published one after another, with women who love visiting dams being called "dam girls."

Behind these efforts was the national government, which has positioned infra-tourism as one of the pillars in its plan to realise the goal it set in March of bringing 40 million foreign tourists to Japan every year by 2020.

As part of these efforts, in January the Land, Infrastructure, Transport and Tourism Ministry set up a portal site for infra-tourism. The site showcases about 270 tours available at dams, bridges, roads and other locations throughout the country.

The ministry's division in charge of policy planning and coordination for public work projects estimates that there are more than 1,000 such tours available throughout the year if unlisted tours are included.

However, one major travel agency points out that construction sites present special problems. "[The situation] on construction sites changes hour by hour, making it difficult to set a season for tours," the agency said. "The availability of restrooms for female participants and sites' readiness to accept [tourists] are also issues."

As the explanations at most utilities are provided by on-site staff, the fact that they are off on Saturdays, Sundays and national holidays has also proven to be a hurdle.

"The appeal is that [visitors] can feel the impact of utilities," said Satoshi Hachima, an associate professor of landscape engineering at the Chiba Institute of Technology who specializes in infra-tourism.

"Making it into a business is the issue, so it's important for facility managers, local governments, travel agencies and other related organisations to have a shared awareness."