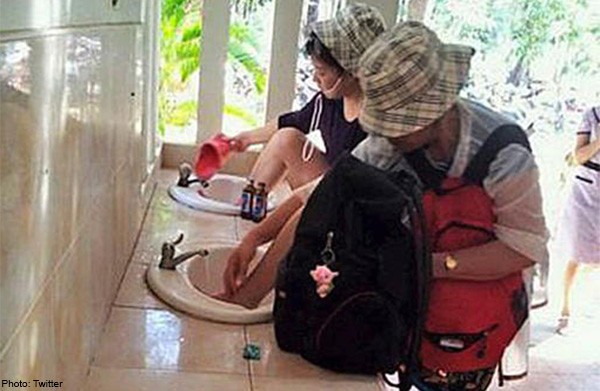 Poorly behaved Chinese tourists were in the news again in Thailand.

After news of tourists kicking the bells in temples and messing up toilets in tourist spots, Thai netizens were up in arms over another picture which shows Chinese tourists washing their feet and shoes in wash basins in Hat Noppharat Thara-Mu Ko Phi Phi national park in Krabi Province.

The picture has been shared more than 100,000 times on Twitter and Facebook, German news agency Deutsche Presse-Agentur reported.

Thais labour to keep their feet clean and ensure they are not cleaned in places where they wash the rest of their bodies, except in the shower.

Said one netizen: "They (Chinese) already let their children defecate in the middle of the airport, this is nothing to them."

The Tourism Authority of Thailand (TAT) is considering producing videos to provide Chinese-language guidance on Thai culture and proper conduct in the kingdom, a representative said on Thursday.

Thailand's National Park Authorities are now looking at introducing etiquette training for tourists after the latest episode, the report said.

The TAT, with local authorities, has already printed pamphlets in Chinese on how to behave at sites such as museums and temples, as well as driving and queuing etiquette.

Recent incidents have drawn the attention of media and authorities to the conduct by Chinese tourists considered offensive.

Last month, a temple in northern Thailand pledged to build new toilets for other nationalities after complaints that Chinese tour groups had misused facilities and left them unusable.

Another incident saw a Chinese tourist kicking bells at another temple.

Fed up with their citizens' behaviour, the Chinese government said it will establish a public record of its citizens who behave badly abroad, the Beijing Times reported.

Methods to manage and record bad behaviour will be formulated and carried out in collaboration with airlines, travel agencies and hotels, said Mr Li Jinzao, the head of China's National Tourism Administration.

Last year, more than 4.5 million Chinese tourists visited Thailand, the most from any single country

This article was first published on Mar 14, 2015.
Get The New Paper for more stories.