Two-thirds of Chinese tourists admit to stealing from hotel rooms

Hotel toiletries are fair game, but they could end up costing the Earth more than the hospitality industry.

As far as most hotel guests are concerned, the miniature moisturiser and sample-size bottle of shampoo are theirs for the taking. In some instances, so too are the toilet rolls, dressing gowns, towels; everything but the bathroom sink. But what exactly is fair game, what remains off-limits and how many of us have helped ourselves to more than we are entitled to when checking out?

According to a recent survey conducted by Japanese television station Fuji TV, almost two-thirds of Chinese tourists professed to pilfering from hotel properties; of the 100 people polled, 63 admitted their guilt. A 2015 study by Travelzoo found that 69 per cent of Americans had admitted to such indiscretions, while one conducted by booking site Hotels.com concluded that Argentinian and Singaporean tourists had the stickiest fingers.

A report in Taiwanese English-language daily Taiwan News about the Fuji TV findings explained that the items most commonly appropriated by Chinese guests included toothbrushes, slippers, hair dryers and toiletries. But with the exception of electrical devices, aren't the other objects intended for guests to use until they can be used no more?

"The general rule of thumb is that if it can't be reused [by someone else], then it can be taken," David Spasovic, marketing manager of Hotels.com, told Australian travel website Escape. "Miniature toiletries, shower caps, combs, disposable razors and toothbrushes; these are all goodies that can be swiped."

Indeed, hotel-branded "souvenirs" such as these practically promote expropriation, having been designed to evoke fond memories of a stay with every subsequent use. Missing towels and bathrobes are likely to turn up on guests' credit-card bills.Photo: Pixabay

The same cannot be said of towels, laundry bags, bathrobes or bedlinen, though. When these items go missing, they are likely to turn up on credit-card bills, if not weigh heavy on the conscience, and their disappearance could even be criminal. In 2010, a woman was ordered to pay a fine or spend three months in jail for taking two towels from the Transcorp Hilton Abuja hotel, in the Nigerian capital. 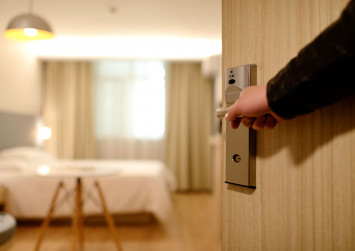 Of the more outrageous or unusual objects targeted by opportunistic looters, there's the grand piano that was wheeled out of the lobby of a property belonging to the Starwood Hotel Group, a stuffed boar's head, chandeliers, curtains and a marble fireplace. On a Reddit thread devoted to the subject of stolen items, a hotel employee details how guests in one establishment took the entire contents of the room they were staying in, from the mattress to the mini fridge, but left the TV because it was old.

The American Hotel & Lodging Association has estimated that hotel thefts cost properties about US$100 million (S$135 million) a year, although the Taiwan News report puts monthly losses at Japanese hotels at a modest US$179 per property. Regardless, whether taken home or not, all those miniature plastic bottles and toothbrushes will eventually be on their way to landfills, costing the Earth even more than the hospitality industry.

Acknowledging that hotels generate a significant amount of plastic waste is one thing, addressing it is another. Slowly, single-use plastics such as bottles, straws and, to the toiletry collector's dismay, the arrays of small smellies are being phased out, replaced with reusable glass bottles and large refillable containers of hair and skincare products designed to be unstealable. Until these alternatives have been rolled out everywhere, however, perhaps think about bringing your own with you - after all, those purloined products aren't going to use themselves, now, are they!