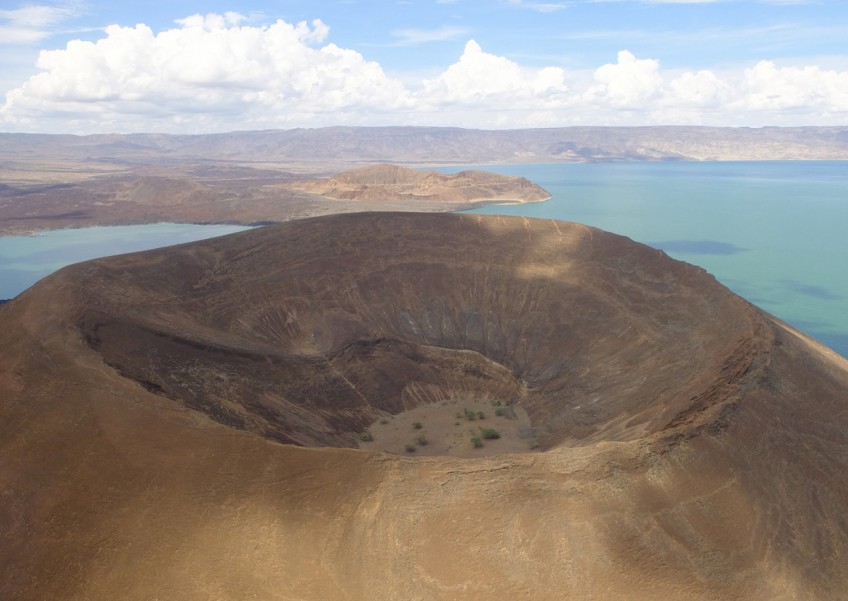 The arid scrubland of remotest north-western Kenya is not an obvious destination for any tourist, let alone those for whom price is no object. It is bordered by Ethiopia and war-torn South Sudan. There are few roads and even fewer hotels. The sun and heat are scorching.

But it boasts two attractions found nowhere else in the world. The first is Lake Turkana, a sublime expanse of turquoise-green water known as the "Jade Sea" which is about 290km long and forms the world's largest desert lake. The second is the fossil beds of the lake's 18,130 sq km basin - layers of ancient sediment forced to the surface by the tectonic movements of the Great Rift Valley. They are so rich in evidence of human evolution that the basin has been dubbed "the cradle of humanity".

From this year, Dr Louise Leakey, one of the world's top paleontologists, will be hosting wealthy visitors to this archaeological treasure trove. She is doing this for the money, she readily admits, but the proceeds will not go to her. They will go to the Turkana Basin Institute (TBI) which her celebrated father, paleoanthropologist, conservationist and politician Richard Leakey, established a decade ago to support scientists searching the basin for answers to the most fundamental questions about humanity - "who are we, where did we come from and how did that happen?".

To join Dr Leakey's journey back to pre-history, however, it is necessary first to reach one of the TBI's two field centres - Turkwel near the lake's west shore or Ileret the other side, and that is the pampered, luxurious part of the trip.

A chartered helicopter will fly parties of four from Nairobi up over the highland moors and forests of the Aberdare National Park, down into the Great Rift Valley and past old volcanic craters to the luxurious Solio Lodge for an evening game drive around the private conservancy of the same name. In three memorable hours, we saw more rhinos than we could count, a pride of lions, giraffes, zebras and much else before returning for drinks, dinner and then the blazing log fires of our own exceedingly comfortable cottages.

The next day, we enjoyed an even more spectacular flight over some of the earth's most diverse and breathtaking scenery. We scattered game as we skimmed over the Laikipia Plateau, the snow-capped peak of Mount Kenya protruding from a veil of clouds far off to the east. We landed on the rims of perfectly conical caldera where the pilot laid out coffee on a table and three girls from the Pokot tribe appeared from nowhere - their necks festooned with coloured bead necklaces, their skin notched with decorative scars, their hair dyed ochre with mud and all three giggling delightedly at their reflections in the chopper's shiny flank. We banked to left and right as we negotiated the twists and turns of a deep river gorge and admired the magnificently coloured escarpments of the Painted Valley.

We stopped and enjoyed the perfect stillness of a pristine sea of undulating yellow sand dunes ringed by towers of black volcanic rock. We flew, with the helicopter's doors wide open, low over endless miles of lifeless lava fields, then an expanse of marshy lakes where panicked crocodiles slithered into the water. Tens of thousands of pink flamingoes took wing as we approached Lake Logipe. Beyond that, over a final ridge of volcanic mountains draped with rivers of petrified lava, the shimmering waters of Lake Turkana stretched away to the horizon like a mirage in this parched and unforgiving land.

Dr Leakey is the third generation of the First Family of Paleontology. In 1959, her grandparents, Louis and Mary, unearthed the skull of a 1.8 million-year-old hominin in a Tanzanian gorge that they named Zinjanthropus boisei, thus persuading their sceptical peers that man originated in Africa.

Two years later, their older son Jonathan found the partial remains of a species they called Homo habilis, or "Handy Man", which gave rise to the revolutionary idea that several species of hominins - the distant, upright-walking ancestors of Homo sapiens - co-existed.

In 1967, their younger son Richard discovered the Turkana basin's fossil beds by accident after his plane was diverted by a thunderstorm while he was flying to Ethiopia. One sensational find followed another - the skull of the oldest known Homo erectus (1.9 million years), the almost complete skeleton of the Turkana Boy (1.6 million years), and the oldest known Homo sapiens (195,000 years).

Louise, Richard's daughter, knows the basin well. As a baby, she sat in a tub of water to keep cool while her parents excavated its fossil beds. By 12, she was driving their Land Rover around the parched terrain. At 21, she took charge of their research programme when her father lost his legs in a plane crash and her mother, Meave, accompanied him to London for protracted medical treatment.

Now 43, lean, fit and married to Emmanuel de Merode, the Belgian prince who runs Virunga National Park in the Democratic Republic of Congo, Dr Leakey has an irresistible enthusiasm for her subject.

From the Turkwel research centre, she drives us several miles to a patch of barren, gravelly hillocks. She shows us the casts of ancients reeds. This was once the marshy edge of a lake or river, she says, and fossils show that elephants, hippopotamuses and crocodiles once lived here. So, rather dangerously, did at least two species of hominins.

She knows that because her field workers have found their teeth. At the foot of one hillock they spotted "four socking great molars" - each nearly 2.5cm across. On another they found some smaller, more pointed teeth. They were unlike any teeth found before, Dr Leakey says with some excitement, and could conceivably belong to previously unknown species.

She takes us to another site where her fossil searchers discovered 10 ancient stone circles. This is where our ancestors buried their leaders 10,000 years ago and, from some of the circles skeletons, figurines, beads and pottery have already been excavated. Soon, we are eagerly hunting for fossils ourselves. We find fragments of fossilised turtle shell, a crocodile vertebrae, fish bones and arrowheads. It is painstaking work, Dr Leakey warns, but to discover the skull or jaw of a human ancestor that has lain unseen for a million years is "incredibly exciting, a moment you will always treasure".

Back at the field centre, Dr Leakey introduces us to the TBI's "rock star" - Dr Sonia Harmand, a French archaeologist from Stony Brook University in New York. In 2011, she found the oldest stone tools in the world when she and her paleontologist husband, Jason Lewis, got lost in the Turkana basin.

Dr Harmand places some of them on the table. They look like ordinary rocks until she points to the fracture marks where our distant ancestors chipped off sharp-edged flakes. That was a turning point, her husband explains. With those flakes, hominins could cut meat off carcasses killed by other carnivores. Suddenly, they had a ready supply of meat. They grew bigger and stronger and came to dominate other animals.

"Since I was 18, I have always wanted to find the world's oldest stone tools and I did it," Dr Harmand says proudly. "It was like a dream."

Dr Leakey shows us some skulls of our forebears and how dramatically they have evolved. She shows us how TBI workers clean and piece together tiny fragments of priceless fossils. Towards evening, she leads us down to the Turkwel river which, being the rainy season, has water in it. We cool off with sundowners on a sandbank in the middle, then head back to the field centre for a dinner of fresh tilapia from the lake. There is no air-conditioning, so we sleep outside on a verandah beneath mosquito nets and wake to a gorgeous dawn.

Somehow, people eke a living from this land. They live in thatched mud huts and own practically nothing except goats. By the lake, men of the Turkana, Dassanech and El Molo tribes fish from rudimentary rafts for tilapia, tiger fish and Nile perch. Their womenfolk - festooned in layers of coloured beads - gut, salt and dry the fish, some using sharp stones to remove the innards.

The tribespeople seem almost closer to those distant forbears than they do to us with our iPads, laptops and GoPro cameras, not to mention the helicopter. Dr Leakey recalls the utter bemusement of some tribal elders when she used a drone to photograph fossil beds so she could put the pictures online for anyone to scour.

But she warns us against arrogance and complacency. Homo sapiens will go extinct, she insists, as surely as all the half dozen other species of the genus Homo have. To demonstrate the fragility of our existence, she invokes a toilet roll with 400 squares of paper. The first sheet represents earth's formation. Dinosaurs appear 19 sheets and vanish five sheets from the end. The first apes appear on the last half of the final sheet. Homo sapiens, which have existed a mere 200,000 years, appear on the very edge of that final sheet.

We are already sowing the seeds of our own extinction, Dr Leakey contends. In the 80 years since her grandparents started searching for the origins of man, the global population has soared from two to seven billion.

We are destroying the environment to sustain ourselves, and even in the Turkana basin, the consequences are everywhere apparent. The wildlife has largely been killed. Overgrazing has turned the land to desert. Overfishing has depleted the lake. Ethiopia has just completed a huge new dam on the Omo river which provides 90 per cent of the lake's water, threatening to turn it into a toxic dust bowl.

"Here in the so-called 'Birthplace of Humanity', you can already see how humanity is destroying itself," she says.

Homo sapiens could well be extinct within a few hundred years and "the planet would be a better place without us".

This article was first published on Jan 10, 2016.
Get a copy of The Straits Times or go to straitstimes.com for more stories.