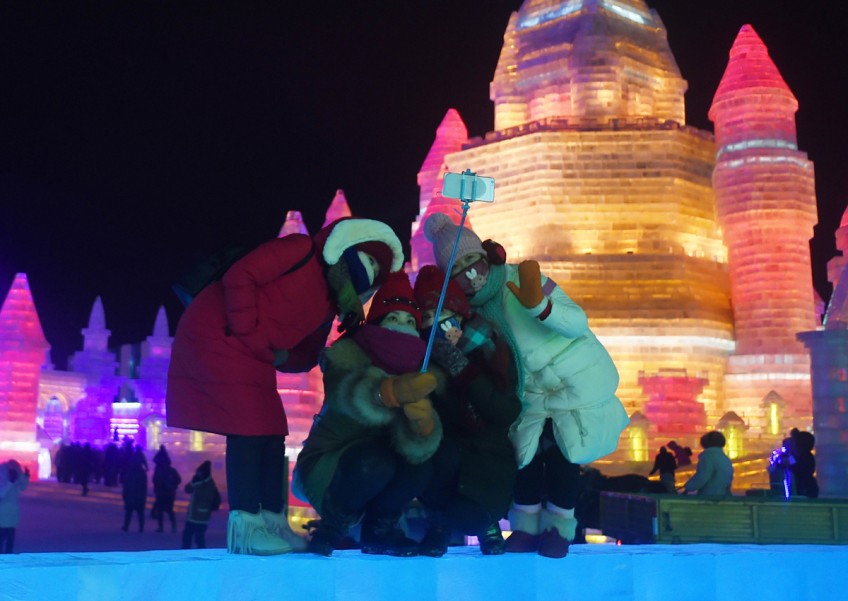 HARBIN, China - Brave swimmers plunged into freezing waters while other visitors gazed at frozen palaces ahead of the opening ceremony for China's spectacular Harbin Ice and Snow Festival on Tuesday.

The annual festival in the capital of the northeastern province of Heilongjiang is expected to draw more than one million visitors to admire castles and cathedrals sculpted out of ice and lit up at night in ethereal colours.

This year's display is the largest in the festival's decades-long history, filling a park the size of more than 100 sports fields and using a record amount of ice and snow, according to the official Xinhua news agency.

Though temperatures on Tuesday remained a biting -14 degrees Celsius (seven degrees Fahrenheit) even at noon, a number of festivalgoers took part in an ice-swimming competition, diving bare-chested and head-first into freezing pools of water cut into the ice.

Those not inclined to take the plunge admired a vast expanse of ice block Chinese palaces, Russian churches and European colonnades, with vendors selling gleaming rows of candied fruit.

Visitors sledded and snapped selfies on the eve of the park's opening ceremony, the translucent pagodas around them glowing in surreally neon pinks, blues and greens.

Chinese and Dutch designers worked with more than 10,000 workers over three months to build the winter wonderland, according to Xinhua.

The centrepiece is a 15-story tower of ice, thought to be the world's tallest.

The festival's schedule includes ice and snow sculpture contests, as well as performances and musical events.

Local authorities hope that the festival can bring much needed tourist dollars to the region, historically one of China's industrial bases, now hit by an economic slowdown.